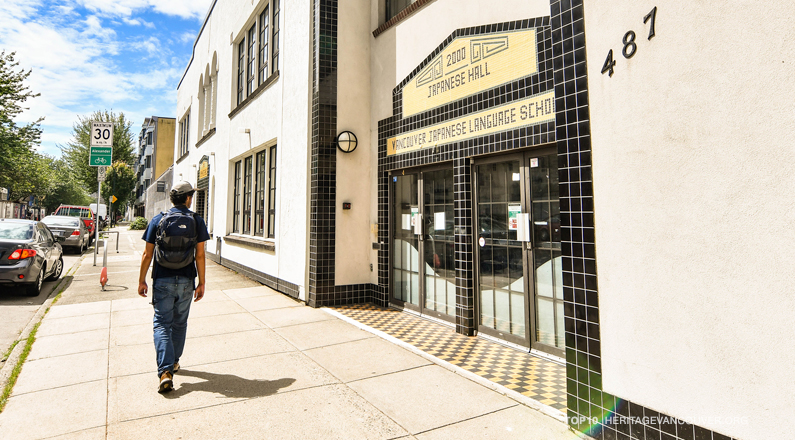 The Issei—the first generation of Japanese immigrants—were mainly men seeking work in the mining, lumber and fishing industries who began to arrive in British Columbia in the early 1880s, and settled in an area along Powell Street. This became the core of an area later known as ‘Japantown.’

Paueru Gai (the Japanese translation of Powell Street) became the business centre of the Japanese Canadian community, and the commercial and social core of a larger residential area. Until 1907, almost all Japanese immigrants were young men, and the proprietors in the area welcomed them and provided accommodation, food and job referrals. Boarding houses and hotels in the area also served loggers, fishermen and railway maintenance workers who came to Vancouver in the off seasons, not all of whom were Japanese.

As a result of the Anti-Asiatic riots of 1907, the federal government insisted that Japan limit the migration of males to Canada to 400 per year, but allowed an increase in the migration of women joining their husbands or unmarried women betrothed to men in Canada. Often employed in the fishing and boatbuilding industries, the Issei established families and spawned a second generation, the Nisei. By the early 1930s, some Japanese Canadians were moving to homes in other neighbourhoods, including Marpole. In February 1942, as a result of the outbreak of war with Japan, the Canadian government announced that all Japanese, including those that were Canadian-born, would be forced to evacuate the British Columbia coast. Some 22,000 men, women and children of Japanese ancestry – 75 per cent of whom were naturalized or Canadian-born citizens – were stripped of their rights, had their property sold and were forcibly uprooted from their homes.

Despite a growing awareness of the importance of Powell Street (Paueru Gai), there is little recognition of its surviving heritage buildings, and no specific heritage area planning protection. There is constant erosion of the building stock in the area, and continuing pressure to replace historic buildings with new social housing projects. A rare exception to this trend was the recent award-winning restoration of Tamura House, which demonstrates the rich potential for the reclamation of the historic character of Powell Street (Paueru Gai).

In the meantime, one of the area’s oldest buildings, the 1890 Russ House at 437 Powell Street (later the Uchida Building and most recently the Ming Sun Benevolent Society) sits with its front brick façade removed, and has been targeted for demolition. 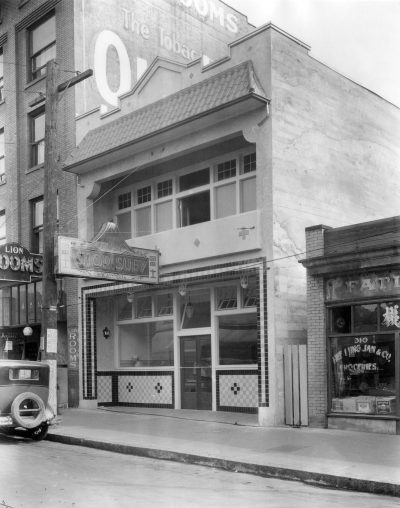 Some of the area’s most significant buildings are either poorly understood or have not been recognized. One example is the Fuji Chop Suey House, 300-314 Powell Street. Designed by western architect W.M. Dodd, Fuji Chop Suey opened in 1931 and was a popular restaurant and meeting place in the Japanese Canadian community.

This was one of the few restaurants where Japanese Canadian families could be served; most other restaurants were for men only, and many restaurants outside of the Powell Street (Paueru Gai) neighbourhood would not serve Asians. The second floor was rented out for weddings and community events. In 1941 it became infamous as the headquarters of the B.C. Security Commission, which directed the internment of 22,000 Japanese Canadians.

This highly significant building is not recognized on the Vancouver Heritage Register.

Powell Street (Paueru Gai) is a unique cultural resource in the City of Vancouver. The Powell Street area was an important part of the development of Vancouver from its earliest years. This historical precinct has been and remains home to a unique civic culture that is intensely connected and committed to the place and its stories.

The community continues to be ethnically and economically diverse, and culturally rich. Japanese Canadians continue to visit the area, for the various programs and seasonal festivals held at the Vancouver Japanese Language School and Japanese Hall, and the activities and services of the Vancouver Buddhist Church. For Japanese Canadians, Powell Street (Paueru Gai) is natsukashi: literally, a place of lots of memories, a place that is dear to the heart.

Individual buildings should be immediately recognized on the Vancouver Heritage Register.

Further planning initiatives, such as Heritage Conservation Area legislation, should formally recognize the historic and cultural significance of the area.

The City of Vancouver should:

What you can do: