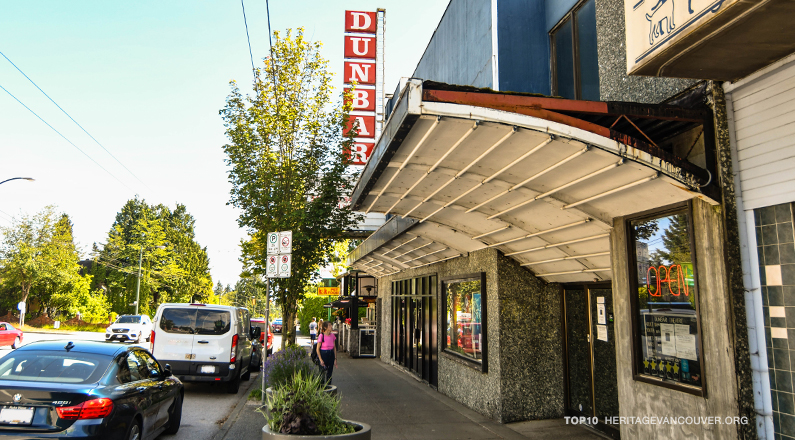 The Dunbar Theatre is a beloved neighbourhood movie house located mid-block on Dunbar Street between West 28th and West 29th Avenue in the Dunbar-Southlands neighbourhood of Vancouver. The building is characterized by its board-formed concrete construction and vertical “DUNBAR” sign. 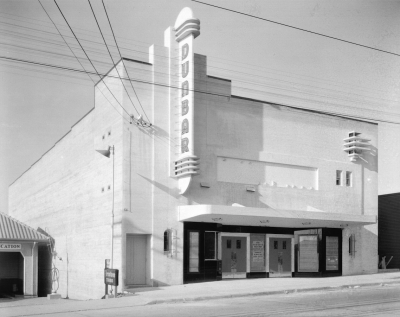 The Dunbar Theatre is one of Vancouver’s last remaining neighbourhood theatres and is an important social gathering place for the community. Currently its status is uncertain and the City of Vancouver has ruled against retaining the facade only.

As with the Hollywood Theatre, a concerted community effort is likely required to save the building. After a public campaign, The Hollywood is being retained as a community space-theatre-live music venue and its Art Deco interior will be rehabilitated and updated. Its exterior, including its neon signs, will be fully restored.

One by one Vancouver’s historic movie theatres are closing, leading to the loss of beloved neighbourhood landmarks and cultural spaces. Many historic film theatres have closed in recent years, including the Varsity on West 10th Avenue, The Van East Cinema on Commercial and the city’s oldest theatre, The Pantages (152 East Hastings), which experienced demolition by neglect.

Most recently, the iconic mid-century Ridge Theatre on Arbutus Street was demolished by Cressey Development Group in 2013 to be replaced with a four-storey condominium development. Community members rallied to save both the Ridge Theatre and its basement neighbour, the Varsity Ridge Bowling Lanes, but in the end, neither of these vital establishments was saved.

Of the few neighbourhood theatres left, the Park Theatre on Cambie Street is still operating, but its future is not secure.

We are losing the places where communities can gather and experience the creative culture of our city. These are unique facilities that help to define Vancouver, as envisioned in the City’s Cultural Plan, as “a city of vibrant creative neighbourhoods.”

If our historic theatres are lost, we are unlikely to see this kind of neighbourhood space constructed again, with the cultural life of Vancouver diminishing by these losses.

Completed in 1935, The Dunbar Theatre is valued as one of the last remaining neighbourhood theatres in Vancouver and is important as a social gathering place and community hub.

The theatre is also valued for its association with film producer J. Howard Boothe, a pioneer of British Columbia’s film industry. Boothe moved to Vancouver in 1918 after managing several theatres in Winnipeg. Known to be acquainted with the Hollywood stars of the time, including Charlie Chaplin, Boothe ran the Dunbar Theatre with his son Frank through the 1940s, when it was purchased by Odeon as their first local theatre in Western Canada.

The Dunbar Theatre was originally designed in the Art Deco Style by Scottish-born architect David Colville. Colville arrived in Canada in 1910, settling in Vancouver before serving in the First World War. Known for the design and execution of numerous buildings for the Bank of Montreal, Colville returned to Vancouver in 1933 and designed the Dunbar Theatre shortly afterward.

Elements that define the heritage character of the Dunbar Theatre are its:

Through the 1930s, the movies offered Vancouverites, many of whom were out of work, something to do for a small fee and a means of escape from the economic reality of the day. While the downtown movie theatres were the largest and received the first run films, neighbourhood theatres known as the ‘Nabes’ became an essential part of Vancouver’s social life for many decades.

Today, intimate and independently run neighbourhood theatres are reminders of the cultural life of Vancouverites of the recent past, and represent significant neighbourhood community space. The Dunbar Theatre exists as one of the last remaining community theatres in Vancouver. As an affirmation of its importance to the cultural life of the Dunbar community, the theatre was reinvigorated through the diversification of its use as a rental venue for special events, as well as investment in new seating and state of the art equipment.

Now the theatre is under threat and Heritage Vancouver believes it is important for the City of Vancouver to use all heritage tools available, such as transfer of density to the adjacent site, in order to attract an owner that understands the value of retaining a ‘sense of place.’

A recent model for retention and use is the Rio Theatre, a movie house built in 1938 which, through a public campaign and a crowd funding initiative, has now retained the venue for a diverse mix of live events, multi-disciplinary art events and film screenings. It is a much loved and frequented cultural venue and a creative business model.

This model is a good one for the Dunbar Theatre and we encourage the City and the community to work together to retain this important cultural venue.