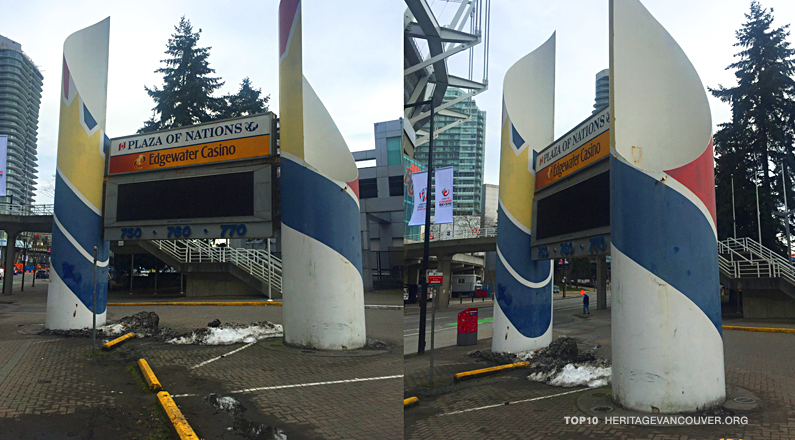 The original Expo 86 pylon sign that marked the entry to the Plaza of Nations at 750 Pacific Blvd., still stands on this site, but has not been referenced for retention, and the site is currently under rezoning.

Vancouver hosted a world’s fair in 1986 to celebrate the city’s centennial. Expo 86 ran for 22 weeks on the north shore of False Creek. The theme was “Transportation and Communication: World in Motion—World in Touch” and stressed Vancouver’s role as a port and a hub for railways, transit and communication. Expo 86 launched Vancouver as a global destination and shaped much of the city we know today.

For decades preceding Expo, the site along the north and east shores of False Creek was home to lumber mills, factories and a CPR rail yard. Some of the land was reclaimed from the inlet with infill. To create the fair, most of the industry was razed and over 60 pavilions—spread over six zones—were built along the shore from Quebec Street to Seymour. One key exhibit, Canada Place (Red Zone), was located off site at the harbour-front foot of Howe Street.

The Yellow Zone represented culture, and the Green Zone was dedicated to the sea and transportation over water. The Pink Zone introduced its visitors to a wide spectre of cultures from all over the world, also focusing on the development of flight technology. British Columbia was represented in the Blue Zone, where ceremonies and nightlife entertainment took place. The Red Zone’s focus was on transportation over land. The Purple Zone was where visitors entered the fair through the Main Gate, and could visit Expo Centre and Folklife.

Expo 86 was a hyper-charged, eclectic cultural showcase. At the western edge of the fair, a giant mock Egyptian temple contained 3,000-year old relics from the realm of Ramses II. At the eastern end, wooden boardwalks led to cedar buildings where Newfoundland fiddlers and First Nations’ dancers entertained. There was everything in between. A corkscrew roller coaster. A manhole-size “million dollar” gold coin. A giant Swatch. A 5.4-km monorail. The world’s largest hockey stick and puck. Hundreds of water craft from around the world, including Japan’s tall ship, the Nippon Maru. Nightly fireworks. In all, 54 countries jostled in the spotlight to share their stories.

When the fair ended, many of its structures were disassembled and popped up elsewhere.

Some of the pavilions designed as temporary modules now shelter businesses in a Delta industrial park, and on industrial sites in Kelowna and New Westminster. The China Gate was incorporated into the redesigned entrance of the Chinese Cultural Centre in Chinatown on Pender Street. The Inukshuk watches over English Bay. The Friendship 500, a floating McDonald’s, is now docked in Maple Ridge where it awaits a new purpose in life. Expo 86 benches have been spotted everywhere from the PNE in Hastings Park to White Rock Beach.

Expo’s 165-acre main site was sold to Concord Pacific and much of the parcel has been re-developed into condo high-rises interspersed with green space in a style known as Vancouverism — but successful legacy structures remain.

BC Place Stadium, Skytrain, Canada Place, the CPR Roundhouse (renovated into a community centre and home to nation-builder Locomotive 374) and the seven-storey geodesic dome now known as Science World are all Expo offspring. Less successful is the geographical heart of the world’s fair, the Plaza of Nations. The amphitheatre is still there, minus the glass canopy that was demolished in 2007. The building that once housed the Unicorn Pub is gone, but its sci-fi, Lego-block counterpart, Pacific Station still stands. And across the plaza, perched creekside is the steel and glass cathedral that served as the star attraction for the BC Pavilion.

Discovery BC in Enterprise Hall contained a transplanted temperate rain forest and elevator platforms that moved guests through various displays of provincial majesty. The giant greenhouse was a post-modern tribute to the Crystal Palace built in London’s Hyde Park for the first world’s fair in 1851. After Expo, the Edgewater Casino operated in Enterprise Hall until 2017.

The Plaza of Nations area is up for redevelopment, like the rest of Northeast False Creek, after City Council’s approval of major development plans in 2018. The heart of Expo 86 will be transformed into a mix of towers and other forms of housing, parks and gardens.

The original pylon sign that marked the entry to the Plaza of Nations still stands on this site, but has not been referenced for retention.

Expo 86 has a troubled legacy. When the fair site was created, most of the industrial structures were swept away without regard for their heritage value. Many long-term residents were removed from their hotels in the Downtown Eastside in favour of tourists. In the end, the event left B.C. tax payers on the hook for $311 million.

However, the world’s fair drastically altered Vancouver’s international status. Expo 86 put Vancouver on the map as a global destination: over 22 million people attended the event, and a boom in tourism and trade followed. Furthermore, no world’s fair has been held in North America since 1986.

The events leading up to Expo 86 as well as its aftermath are striking examples of the lack of appreciation for heritage in Vancouver. The industrial area in False Creek North was ‘cleaned’ for the Expo 86, only leaving the Roundhouse as a reminder of the past. Within about a decade after the fair ended, development had already swallowed the west half of the Expo 86 grounds; and more recent the east side has been up for change, as it will be in the near future too.

Except for some buildings and SkyTrain, there is physically barely anything left in Vancouver of the event that drastically changed the world’s view of the city. With further redevelopment and new infill comes the disappearance of the Expo 86 plan too. Altogether, this has not only led to the loss of most of its physical remains, but will also lead to the loss of the idea of Expo 86 from Vancouver’s cultural memory.

Given that Expo 86 ushered in Vancouver’s era as a cosmopolitan city, efforts should be made to leave within public memory, meaningful reminders of Vancouver’s over-the-top coming out party.

What you can do: