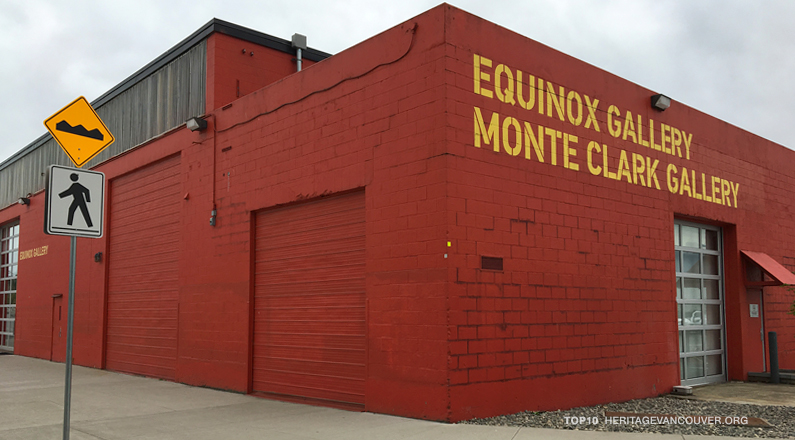 525 Great Northern Way buildling, is the largest and most significant structure that remains from the original Finning International manufacturing complex built in 1964.

In 2012, the Equinox Gallery relocated from the South Granville Gallery District, where it had been for decades, after first opening downtown in 1972, to the new creative arts district in the False Creek Flats. The move was to the site of the former Finning International Ltd. manufacturing plant for Caterpillar and other heavy industrial vehicles.

Finning donated this site to the Great Northern Way Trust, that comprises three universities [UBC, SFU, and ECUAD (Emily Carr University of Art and Design)] and BCIT (BC Institute of Technology). This unique, large central site is being redeveloped as a creative sector for ECUAD, the Centre for Digital Media and other facilities for the visual arts.

The Equinox Gallery renovated the former 1964 Finning paint and mechanical shop to create a group of large, high, open and day-lighted gallery spaces. The renovation is perfectly suited to displaying modern works of art. A year after Equinox moved in, the Monte Clark Gallery took over a smaller space on the west side of the building. Painted bright red with yellow lettering, the structure is now named 525 Great Northern Way or simply “525”.

In a September 2017 Vancouver Sun article by John Mackie, Andy Sylvester, the owner of the Equinox Gallery, reflected on some of the effects that the gallery has had in this location. “It helped in the inspiration of bringing Emily Carr University of Art and Design to this part of the city.” Equinox has also attracted other art galleries that form a synergy with each other and with the two institutions – ECUAD and the Centre for Digital Media. “This is important for the culture and for the soul of the city.”

“Creative campus” is the term that the City of Vancouver uses to describe this area that forms the southeast quadrant of the False Creek Flats Area Plan, a vision approved by City Council in May 2017. This plan creates a framework for a dynamic new mixed-use community in the False Creek Flats. The Flats are bounded by Main Street on the west, Prior and Venables Streets on the north, Clark Drive on the east and Great Northern Way on the south.

525 is now threatened with demolition.

TransLink is proposing to demolish it to build the Millennium Line Broadway extension of the SkyTrain, using the cut and cover method as was done to build the Canada Line along Cambie Street.

However, for two years a major campaign has been underway to convince TransLink to modify the construction method to tunneling under existing structures and to change the alignment slightly, in order to preserve this unique building. Meetings have involved the CEO and the Chief Engineer of TransLink, and members of the previous and current City Councils, but none of them have found a way to prevent demolition.

NPA Councillor Rebecca Bilgh has been one of the few to express her support for saving 525 and the Equinox and Monte Clark Galleries.

525 Great Northern Way is the largest and most significant structure that remains from the original Finning International manufacturing complex. Although it is only slightly more than 50 years old, it remains a highly-significant example of an historic industrial building. It is one of the few surviving industrial structures in the False Creek Flats that contrasts with the new buildings in this evolving arts campus, and anchors the historic context of the area.

Inside the Equinox Gallery—behind and above the new white walls—you can see the original sturdy brick walls, the steel structure supporting a massive wood roof deck and some of the high-level cranes and other vintage machinery. The original concrete floor is suggested by an industrial grade plywood floor painted a uniform light gray. New hardware, glazing and doors respect the original industrial aesthetic.

There are only a few surviving historic industrial buildings such as 525 Great Northern Way in The Flats, and the plan encourages that they be retained and integrated with new structures as this area evolves. The planning materials state: “The health of Vancouver’s arts and cultural sector relies heavily on The Flats. By protecting affordable industrial spaces, Vancouver can help sustain this critical mass that facilitates new ideas and experimentation, fosters creative exchange between the arts and other sectors, and helps animate a vibrant local economy.”

The two galleries in 525 create a strong community with ECUAD, the Centre for Digital Media, and several nearby private galleries on East 1st and 2nd Avenues. The art galleries include Gallery Jones, BAF Gallery, Elan Fine Art Ltd., grunt gallery and the Libby Leshgold Gallery inside ECUAD. Andy Sylvester has referred to the “superb synergy between the Equinox Gallery, the other galleries and Emily Carr University.” This provides unique benefits for the students, teachers and the art-loving gallery-goers.

Heritage Vancouver supports the “Save 525” campaign. We encourage TransLink to modify the alignment and/or the construction method for the Millennium Line Broadway SkyTrain extension to avoid demolishing 525 Great Northern Way.

We also ask the City of Vancouver add its support to saving this industrial heritage building. The Equinox and Monte Clark Galleries have played an essential role with Emily Carr University and the Centre for Digital Media in the success of the Great Northern Way campus.

We encourage the City of Vancouver to acknowledge that 525 and the two galleries are a perfect complement to the “creative campus” that is such an important cultural feature of the approved False Creek Flats Area Plan. The City should reinforce its policy to retain historic industrial structures located on The Flats, and communicate directly with TransLink to resolve this issue.

We request that the Great Northern Way Trust, the owner of the building, engage a heritage professional to prepare a Statement of Significance and a Conservation Plan for this unique structure.