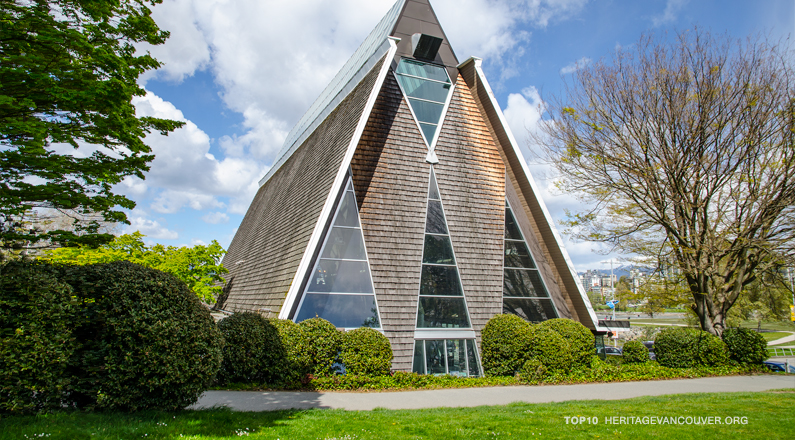 Located on the waterfront of Hadden Park at 1905 Ogden Avenue is the Vancouver Maritime Museum (VMM). Conceived as a British Columbia centennial project, the museum opened in 1959. The wood-shingled and glass A-frame building, designed by C.B.K. Van Norman & Associates, was added to the museum in 1966, and houses the museum’s main exhibit: the 1928 RCMP Arctic explorer vessel, the St. Roch, which is a National Historic Site.

The signature design element for the grounds is a 100-foot totem pole carved from a 600-year-old cedar tree by Chief Mungo Martin (1958). The totem pole has temporarily been removed for restoration.

In Spring 2018, the Daily Hive published a set of articles about the possible move of the VMM from its current location to Coal Harbour in downtown Vancouver. The proposed new location would be the six-acre site of the Westin Bayshore Hotel, which is being redeveloped by Concord Pacific.

A preliminary conceptual design for the museum was made by internationally-renowned Italian architect Renzo Piano (Renzo Piano Building Workshop Architects). The new VMM features a floor area of up to 91,000 sq. ft., which is close to four times the size of the current museum’s building. At the new location, the St. Roch would again be the centre piece of the museum.

Although previous plans to relocate never succeeded, moving to a new location seems inevitable for the VMM given the current building’s conditions. The small floor area allows the museum to only exhibit five per cent of its collection. The museum is located on a flood plain and the non-displayed artifacts are stored below the water level. The building further suffers from a leaking roof.

A new location for the VMM would leave the current building empty, which eventually could lead to the tragic loss of a character C.B.K. Van Norman building in Vancouver.

For 60 years now, the VMM has worked to preserve and tell the maritime history of the Pacific Northwest and Arctic. A British Columbia centennial project by Raymond O. Harrison/C.B.K. Van Norman & Associates, the building has historical and architectural value to Vancouver, representing Mid-Century Modern architecture. As the first museum to be built in Kits Point, the VMM was the starting point of the cultural enclave at the adjacent Vanier Park.

The hub includes the Museum of Vancouver and H.R. MacMillan Space Centre (1968), the City of Vancouver Archives (1972), the Vancouver Academy of Music (1976) and the Gordon MacMillan Southam Observatory (1979).

The VMM is directly related to Chief and artist, Mungo Martin’s 100-foot totem pole and the North-Vancouver-built St. Roch. Mungo Martin was a significant Northwest Coast-style artist in the fields of wood sculpture and painting, and a major contributor to Kwakwaka’wakw art.

The St. Roch, which has been designated as a National Historic Site, was the first vessel to sail the Northwest Passage from west to east (1940-1942) and the first to complete the passage in one season (1944). In 1954, with Captain Henry Larsen in command, the St. Roch returned to Vancouver through the Panama Canal and became the first vessel to circumnavigate North America.

Heritage Vancouver acknowledges the importance of a new location for the Vancouver Maritime Museum. Vancouver and B.C.’s maritime history is currently undervalued, and the VMM needs a location that can provide better use of its collection.

The current museum building, however, needs to be reviewed as to what purpose it can fulfill in the future. Such a prominent character building at Vancouver’s seawall should not be allowed to disappear by neglect.

Further attention goes to the land on which it is located. Hadden Park was created by infill, lies partially under sea level and could be claimed by various parties.

Heritage Vancouver encourages the City of Vancouver to discuss the future of Hadden Park with relevant stakeholders.

We encourage the citizens of Vancouver to:

Kenneth Chan, ‘This is the conceptual design for the new Vancouver Maritime Museum in Coal Harbour’