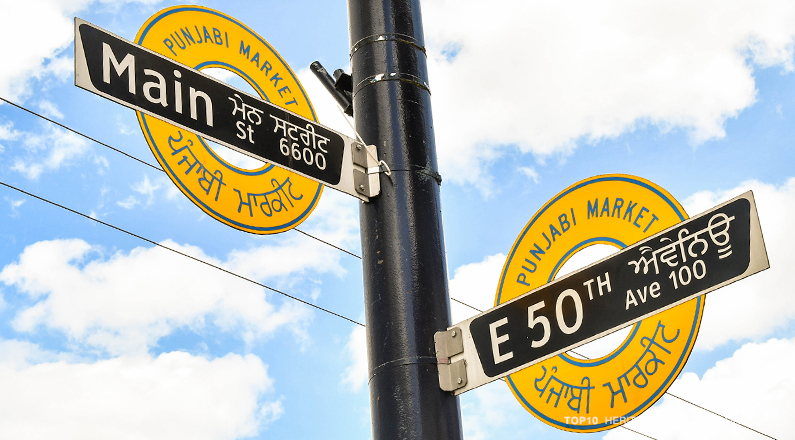 *Heritage Vancouver would like to thank the Punjabi Market Association and the crew of volunteers and community members for assisting us in writing this paper. Specifically, Dajlit Sidhu uncle (co-founder of the PMA), Toor uncle (co-founder of PMA), Pall Beesla (Board Member, Khalsa Diwan Society), Seema Aunty and Gulzar Nanda (Jewelers in Punjabi Market), Ajay Puri (community organizer for Punjabi Market) and volunteers Aneesha Grewal, Abhishek Gupta, and Suparna Gupta.

Punjabi Market is the first and largest South Asian market outside of South Asia. This commercial district stretches along Main Street from 48th Avenue to 51st Avenue in the Sunset neighbourhood.

The first South Asian shop opened on the strip on May 31, 1970 and 2020 will mark the 50th anniversary of the Market. In its heyday, during the 1980’s and 90’s, there were over 300 shops in this area and the market was full of people walking, shopping and gathering. Punjabi Market was also the first place in the world (outside of South Asia) to have Punjabi on street signs. Furthermore, Vancouver hosted the first and largest Vaisakhi celebration outside of Punjab. The Vaisakhi parade winds its way through the community each spring and is one of Vancouver’s largest annual event – where over thousands of people gather and participate every year. 2018 marked the 41st annual Nagar Kirtan, which is a Sikh custom of singing hymns in procession and honoring the birth of the religion.

Despite these achievements, businesses started leaving and closing up shop in the Market in the mid-2000s and the area’s vitality started to wane. Nonetheless, there is a strong desire by members of the Punjabi Market community to revitalize this area in a manner that honours the rich history and its context.

Punjabi Market is regarded as an important area with a number of directions to be considered in order to strengthen its character in the City of Vancouver Sunset Community Vision document.

A rezoning application for 6505, 6507 and 6541 Main Street at the Southwest corner of Main and 49th Avenue (the corner which was the original location of All India Sweets) resulted in the City of Vancouver citing in its Policy Report for the rezoning application made to Vancouver City Council in February of 2016, “significant public interest was expressed regarding the commercial vibrancy of the shopping area.” The same report indicates a number of opportunities for revitalization through rezoning for larger developments and residential intensification.

Without more substantial measures that address experiences and the types of shops, the special qualities that define the Market are at risk and Punjabi Market is vulnerable to losing it’s unique value to the area and City at large.

Most recently, it has been pointed out that the new Tim Hortons that has moved into the Southwest corner of Main and 49th, as part of the rezoning of 6505, 6507 and 6541 Main Street has made vulnerable the cafe across the street, which in many respects, appears to exemplify a small business that has adapted to the local context. This development is noted in the aforementioned report as “enhancing the public realm and commercial vibrancy of the area.

The Punjabi Market shopping area is an area with historic significance and present-day importance. It is an invaluable part of the city’s diverse history, culture and commercial identity. A once thriving commercial node, this area is currently experiencing economic decline and a lack of vibrancy. Today, South Asian shops still have a presence in the Punjabi Market, but in recent years many businesses have closed or relocated.

At its peak, Vancouver’s Punjabi Market had over 300 shops, including 24 jewelry stores, 36 clothing and fabric stores, 20 restaurants and grocery stores and was a thriving, bustling neighbourhood filled with economic and community activity. The restaurants and shops were well frequented by locals and tourists wanting to experience the largest South Asian market in North America.

Businesses started leaving the market in the mid 2000s and the area started to deteriorate. There are views that this is due to business owners heading to Surrey, where there is a perceived larger market. There are also views that this deterioration has been due to the fact that this area is overlooked by the City in its planning initiatives.

Additionally, in the first sixty years of the city’s history, racial prejudice and discrimination against South Asian people was commonplace. This is something that should be explored more in depth when considering the significance of the Market.

The significant public interest in response to the rezoning application for the Southwest corner of Main and 49th is important because, like many other areas in the city, development applications for sites are sparking demands, concerns, and ideas for the affected area as a whole. Individual sites play a role in adding to and detracting from the various aspects that make up neighbourhood character of an overall area. In Punjabi Market’s case, this includes but is not limited to: business types and diversity; public realm improvements; provision of cultural space to address the importance of practices, routines and rituals; and engagement with local community.

We note that appropriate revitalization involves much more than residential intensification, the provision of commercial units in new developments, and architectural elements that reflect a local history. What goes into these commercial units, the nurturing and strengthening of the special qualities that are characteristic of this place, and the opportunities for new residents and visitors to engage with and experience these special qualities are necessary considerations.

To that end, we encourage the city to: