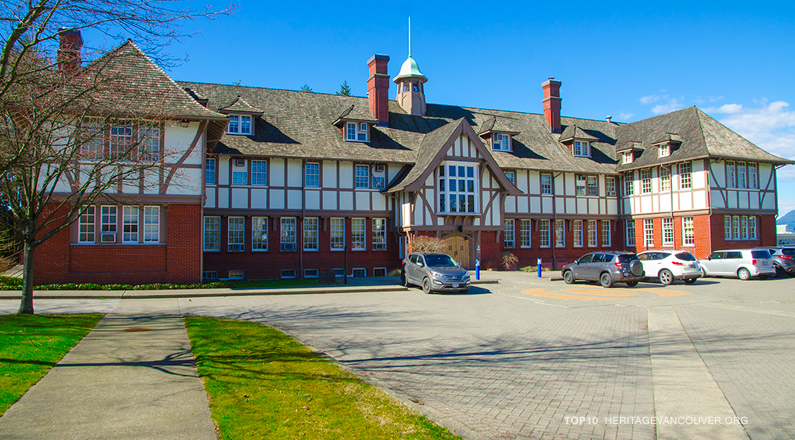 The Fairmont Academy Building is an A-Listed heritage building that has played a number of roles through much of Vancouver’s history. The building is currently located on the Heather Lands, a 21-acre parcel on Heather Street between 33rd and 37th Avenues.

The site is owned by the Canada Lands Corporation (CLC) and the Musqueam Indian Band, Squamish Nation, and Tsleil-Waututh Nation (MST Nations) through the MST Development Corporation. Because the Fairmont building was used as an RCMP headquarters for many years, the MST Nations see it as a constant reminder of a negative history between First Nations and the RCMP. When examining the future of Heather Lands, The MST Nations and CLC requested that the structure be removed from the site as an act of reconciliation, and a new cultural centre built in its place. On May 15, 2018, City Council adopted the Heather Lands Policy Statement, which directs City staff to explore the feasibility of relocation and identify an alternative location for the building.

The Fairmont Academy is listed as an “A” on the Vancouver Heritage Register. Should City staff be unsuccessful in finding a new site for the building, it will be demolished.

Part 4.2.8 regarding the Fairmont Academy Building under the policies section in the Heather Lands Policy Statement reads:

City staff will lead an exploration of options to relocate the Fairmont building off-site, with support from the MST Nations and CLC. The exploration will include identification of potential partners, a feasibility study, determination of a new use and full-cost analysis of relocation and required upgrades.

If an alternative location cannot be identified within the next 1-2 years and relocated by 2023, the building will be demolished. Prior to demolition, the building will be photographed and documented for the public record, and opportunities to salvage and repurpose architectural elements (e.g. original windows) and building materials (e.g. reclaimed timber) will be provided.

Fairmont Academy was built in 1912 as The Langara Boys School. The private school folded by 1917.

As part of the “E” Division headquarters, the Fairmont building was turned into a barracks. Through the years, until the RCMP headquarters moved to Surrey in 2013, the building was also used for training and office space for different units. The grounds in front of the Fairmont Barracks were used for many official ceremonies, including the adoption of the new Canadian flag in 1965. It is reported that those who have lived, worked, and trained here number in the thousands. There had been hope that the building would be turned into accommodations for retired members of the RCMP. RCMP veterans continue to have memories tied to this building.

Architecturally, the Fairmont Academy is significant as a highly-accomplished example of the work of well-known B.C. architects, Maclure & Fox, and is their most significant institutional project. It reflects the prevailing Arts and Crafts movement that influenced the design of many of the Edwardian-era mansions in First Shaughnessy. The structure is distinctive for its Tudor Revival style and for its relationship with the open natural setting and landscaping.

Local First Nations have negative associations with the Fairmont Academy as a physical representation of the RCMP’s role in the unjust treatment of First Nations people. It is seen by them to be a symbol of “when customs and culture was oppressed and the Nations peoples were shifted off their traditional lands.”

Heritage Vancouver awaits news on any progress City staff has made in finding an alternative location for the building and in determining uses for the building. The issues surrounding the building are complex and intricate as there are a number of values – architectural, cultural, natural, historical, potentially economic – that are important to different communities and stakeholders.

The request for removal by the MST Nations and CLC, the City’s conclusion that “the required retention of the Fairmont building is contrary to the spirit and intent of reconciliation” and the subsequent decision to look at relocation adds an additional level of significance to the Fairmont Building.

In this light, how the building is used so that its multiple meanings are meaningfully conveyed, should it be saved from demolition, is an important question. This will depend on how effectively the various histories and other important values, in particular the significance of reconciliation associated with the building, are recognized, communicated to, and experienced by, current and future populations.

To these ends, we believe the City should:

Let the City of Vancouver know you wish to learn more about reconciliation and First Nations culture, and how you can be a part of the reconciliation process.

Let the City of Vancouver know you are concerned about the possible demolition of the Fairmont Academy and would like to learn more about the relocation of the building.

Let the City of Vancouver and local heritage organizations know you wish to learn more about the evolution and recent thinking and approaches to heritage conservation.