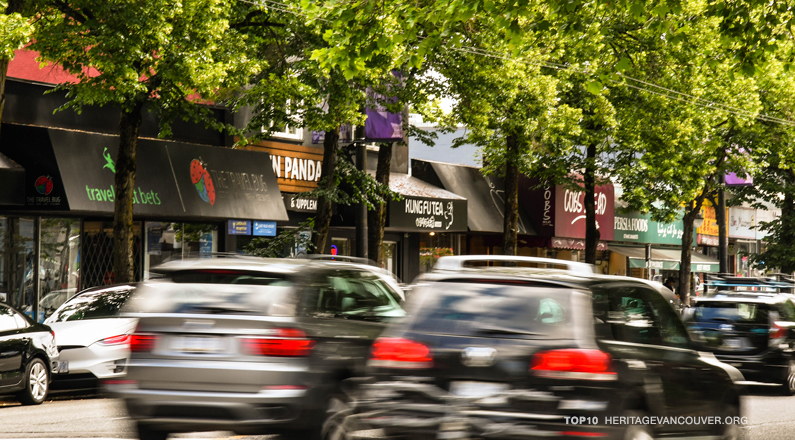 From now until 2020, Broadway will be subject to a planning process related to the proposed rapid transit line. Without careful identification of tangible and intangible assets, effective policies and sincere community engagement, this planning process may result in a new Cambie corridor: large residential blocks that are disconnected from existing neighbourhood and street life.

The varied character neighbourhoods that make up Mount Pleasant, South Main, Cambie cross roads and east Kitsilano could be lost.

We support a progressive, performance-based planning process that truly listens to residents and does not have any preconceived notions of how transit-oriented neighbourhoods should look and feel.

The stated goal for the Broadway Area Plan is as follows:

Our goal is to support growth while maximizing the opportunities associated with the new rapid transit connection to the region.

Not stated is an intent to retain and enhance neighbourhood character, while allowing growth to occur. Change and growth is good when it includes rapid transit and increased affordability.

Unfortunately, with the Cambie corridor and Canada Line planning process we have seen what results when a planning process is done poorly: windfall assembly sales for some property owners that then are demolished and turned into medium-scale buildings with a poor relation to their neighbourhood and little or no contribution to street life.

The region also stretches way back in time, with First Nations’ activity on the slopes long before 1890 when the first road was built and became a major colonial thoroughfare. This rich history has left numerous unusual architectural and placemaking assets, along with many intangible patterns of daily use.

The BowMac sign, the Main Street Triangle, the collection of outdoor stores around the old MEC site, walkup “Dingbat”* rental zones at Granville Street, one of Vancouver’s first low-energy townhomes at Vine Street – all represent important times and movements that deserve attention and protection. These are just a handful of examples in a long list of important sites.

Few of these areas, buildings, signs and stores are protected in any legal or policy sense. If wholesale redevelopment as per the Cambie corridor occurs, particularly around the proposed transit stops, the patterns of daily life that make up these neighbourhoods will be broken up and lost.

Generally speaking, existing services and shops are not able to move back into the standardized commercial retail units that are included in new developments. This might be due to rent increases, incompatible floor sizes or simply a lack of uniqueness and disruption of normal business operations. In the worst case, the new stores are nearly blank facades (banks, large format retail), in better cases the replacement stores are simply new ventures that will require time to become ingrained into the street and neighbourhood.

We are not planning experts, but believe that solutions can be acquired from past masterplans such as Granville Island and Northeast False Creek. These successful projects explored performance-based zoning tools with a minimum percentage of unit types and tenure, not prescriptive heights, setbacks and firm FSR targets with block after block of the same zoning type.

A successful Broadway area plan that respects existing neighbourhoods may require careful control of land use and block by block negotiation in order to retain important concentrations of intangible patterns.

*Dingbat Apartment – A dingbat is a type of formulaic apartment building that flourished in the 1950s and 1960s, a vernacular variation of shoebox style “stucco boxes”. Dingbats are boxy, two- or three-story apartment houses with overhangs sheltering street-front parking. Since the 1950s they have been the subject of aesthetic interest as examples of Mid-Century modern design and kitsch, since many dingbats have themed names and specialized trim. From a structural engineering perspective, the “tuck-under parking” arrangement may create a soft story if the residential levels are supported on slender columns without many shear walls in the parking level. [Wikipedia]