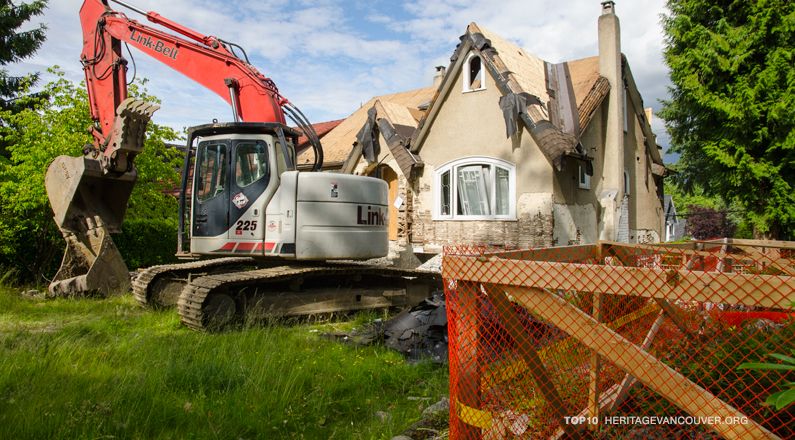 Despite all the City’s efforts, the deterioration of the qualities that make up neighbourhood character, including the demolition of character houses (which continues at an alarming rate – 877 in 2017), is unabated.

Over the last three decades the City of Vancouver has made significant commitments to heritage conservation, whether that was focused on the built heritage or the intangible aspects of heritage. In 1986 as part of the celebration of Vancouver’s centennial, a Heritage Conservation Program was established.

In 2013, City Council approved a plan that would improve how the City supported heritage conservation. The resulting Heritage Action Plan included an exhaustive review of the existing plan, numerous additions to the Vancouver Heritage Register, the introduction of an incentive program to retain our quickly disappearing character houses, and sustainability, advocacy and awareness initiatives. It also included strategies to closer align with current heritage best practices, such as a values-based approach to heritage, and ways to address First Nations issues and Truth and Reconciliation.

So why is Vancouver continuing to lose its valuable heritage resources?

The threat to heritage in Vancouver is significant despite the efforts the City has undertaken. There are many documented cases where the current bylaws, regulations, and incentives are failing, but take as an example Rounsefell House at 3737 Angus Drive.

In 2015, and not without opposition, City Council approved the first and only Heritage Conservation Area in Vancouver for First Shaughnessy, a west side neighbourhood that illustrates the influential role the Canadian Pacific Railway played in the development of Vancouver. To ensure the 300 plus heritage properties in the First Shaughnessy Heritage Conservation Area would be maintained to a standard befitting their status, the City also approved a Heritage Property Standards Maintenance Bylaw. 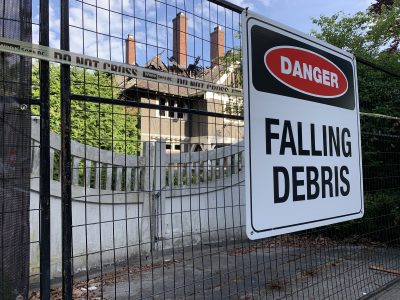 The Rounsefell House designed by Maclure & Fox, at 3737 Angus Drive – still fully exposed to the elements since the fire in October 2017.

Rounsefell House is one of those protected properties in First Shaughnessy, a significant ‘A’ listing on the Vancouver Heritage Register. Built in 1911 by the celebrated Vancouver architectural firm of MacLure and Fox, it was mysteriously ravaged by fire on the night of October 22, 2017. It had been vacant and unfurnished for some time. Fire department officials concluded the fire was caused by arson. Despite its protected status, and the City’s many attempts to enforce the Heritage Property Standards Maintenance Bylaw, Rounsefell House continues to be neglected by its owners, and the dispute is currently before the BC Supreme Court. Rounsefell House sits roofless, exposed to the elements, deteriorating day by day, almost two years since the fire.

The threat to this heritage property and other heritage assets across the city is real. Despite all the City’s efforts, the deterioration of the qualities that make up neighbourhood character, including the demolition of character houses (which continues at an alarming rate – 877 in 2017), is unabated. Demographic mix, commercial character, public gathering spaces, streetscapes etc. are all at risk. The day to day vibrancy brought about by the many social interactions that people have with these places and with their neighbours are valued as qualities that contribute to a meaningful life. The redevelopment of the Cambie Street corridor has irrevocably changed that neighbourhood. How will the Skytrain expansion along Broadway affect the 485 city blocks currently under study?

It could be said that Vancouver’s heritage is in crisis. There is an extraordinary value placed on land that jeopardizes the future of heritage buildings and whole neighbourhoods and communities. We are experiencing an unprecedented housing shortage that has resulted in the massive demolition of older and more affordable houses. We have neglected our buildings, parks, neighbourhoods, treasured places because we fail to steward what we hold dear. Some say we’re losing the heart and soul of Vancouver.

The Statement of Significance for First Shaughnessy says that it is “a superb expression of early urban planning movements; a cultural landscape of estate properties; and a collection of traditional architectural styles, designed by notable architects of British Columbia”. Rounsefell House, one of the earliest properties developed in First Shaughnessy, is recognized and valued as an “A” listing on the Vancouver Heritage Register. It was / is protected under the First Shaughnessy Heritage Conservation Area Bylaw and the Heritage Property Maintenance Standards Bylaw.

Not all of heritage value in Vancouver is as grand as First Shaughnessy or Rounsefell House. Vancouverites value their humble neighbourhoods as much as, or perhaps even more, than their affluent ones. The area around Cambie and King Edward Blvd was once a relatively modest middle class neighbourhood, home to a mix of families and seniors, and students who lived in rented basement suites while they attended UBC. They’ve been displaced for luxury condos that few Vancouverites can afford to buy, let alone rent. The neighbourhood businesses in the Cambie Village, where those families and seniors and students shopped, are slowly disappearing. The character, the diversity and the unique identity of this neighbourhood have disappeared. This is being repeated all over Vancouver as our much loved neighbourhoods are replaced by a homogenous 21st century blandness.

There is evidence that the recently introduced Character Home Incentive Program is failing. The City’s program to retain character houses by allowing additional density doesn’t seem to be sufficient to save them. It was a valiant effort to maintain affordability and diversity to allow additional density in single family zones for much needed variety in housing.

The significance of First Shaughnessy, Rounsefell House, our designated properties, our neighbourhoods, our character houses, and our neighbourhood businesses is immeasurable. Our heritage – built, cultural and social, illustrate our past, show us where we came from and should inform us of where we’re going.

Heritage Vancouver supports a city that is sustainable, affordable, livable, that recognizes the value of our social, cultural and built heritage, and that first considers the people that live here now before making unalterable changes that will certainly displace many of our communities and people.

Heritage Vancouver urges City Hall to release of the update of Heritage Action Plan that was promised for April 2019.

Heritage Vancouver eagerly awaits the decision of the BC Supreme Court on the dispute over Rounsefell House, one of the most protected buildings in the City. Will the courts allow the City of Vancouver to compel the owners to rebuild? The court’s decision should send a clear message to owners of heritage properties.

Our aging heritage programs, including those of Heritage Vancouver, also need to be updated to address these broader issues of what makes a successful city, in addition to the existing emphasis on the architectural and historic.

And what of the residents of Vancouver? What do you think? What can you do?