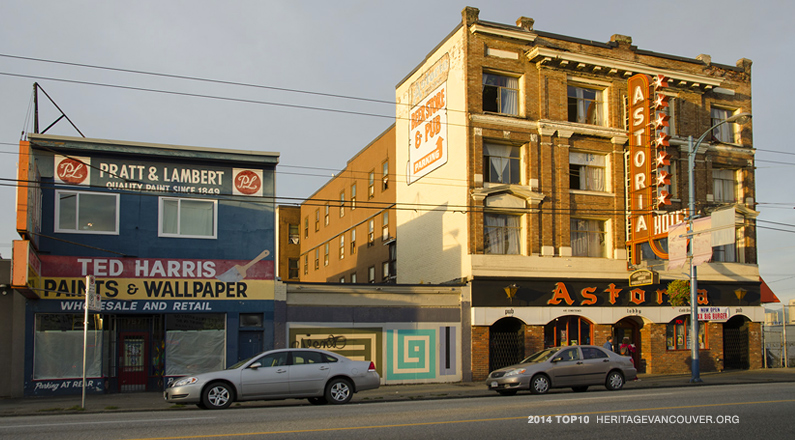 Ill-considered development along this corridor could impact critical heritage and cultural landmarks at an accelerating rate. Unrecognized but important heritage assets remain unprotected and could be lost, or could alternatively be retained and rehabilitated to serve as a basis for a renewed local shopping area.

What is the threat to the East Hastings Area?

In 1996 Council policy to “let go” of the industrial frontages reads:

“If the site is located in an area “let go” in 1990, including South-east False Creek, Hudson Street Industrial Area, Hastings Street frontage, and Cedar Cottage, new uses will be permitted once appropriate policies for land use and public requirements have been established.”

In practice, this has meant near-guaranteed approvals for rezoning applications that propose to replace existing industrial uses with mixed residential and commercial uses. While initially the policy had little impact, in recent years growth pressure from an expanding Downtown peninsula has accelerated this process. This year, the City approved a renewed Downtown Eastside Local Area Plan (DTES LAP). The current draft plan solidifies the East Hastings “let-go” area with a specific land-use policy and density projections; concept images show both sides of the street lined with four to six storey residential buildings on top of street level retail. Our specific concern is with the blocks between Heatley Street and Campbell Drive. There are at least four heritage assets that remain unprotected and could be subject to redevelopment and demolition at any time. These, and other unrecognized but important heritage assets, remain largely unprotected by the City of Vancouver’s Heritage protection framework and could be lost.

Why is the East Hastings Area important?

Strathcona and the Hastings Town site are Vancouver’s oldest European settlements. They are recognized among Vancouver’s most livable neighbourhoods, with a unique mix of housing typologies, low-rent industrial/craft spaces and generous green spaces, but with a limited number of local shopping options. The current DTES LAP proposes to create a ‘high-street’ along the blocks from Heatley to Clark as a part of the renewal of the area. While we support these efforts, we note that without immediate action to protect existing heritage assets in this area, they could disappear almost literally overnight. Specific examples of properties from the East Hastings High Street that could be included in a revitalized heritage protection framework might include:

The needless loss of these important cultural or architectural buildings, in favour of anonymous four and six-storey apartments with unremarkable commercial storefronts, would impoverish the urban fabric of the East Hastings corridor as well as the city as a whole. The nature of the corridor’s zoning means that many development projects will have to undergo a rezoning process to achieve their goals; this gives the City leverage to ensure the protection of potential heritage assets using traditional heritage protection frameworks as well as perhaps test out new policy tools that will arise out of the Heritage Action Plan.

We applaud the City of Vancouver for committing to the Heritage Action Plan in 2013, as well as proposing to expand specific heritage protection and rehabilitation policies as a part of the Downtown Eastside Local Area Plan (DTES LAP). We recommend that the proposed Hasting Urban Design Framework include general guidelines on heritage as well as specific protection for certain at-risk properties.

The creation of a thriving High Street for the East Hastings/Strathcona Area would be greatly assisted by the identification, protection and rehabilitation of existing heritage assets.

We recognize that not all buildings in this area have heritage value. However, protecting those that do have heritage merit could create a series of charismatic anchors within more ordinary retail frontages. Studies have demonstrated that heritage buildings not only provide unique opportunities for retailers to distinguish themselves from their competitors but they also increase the land value and desirability of a shopping area.

Take both quick and long term actions to preserve the important character of Heatley to Campbell and create a high street for Strathcona: