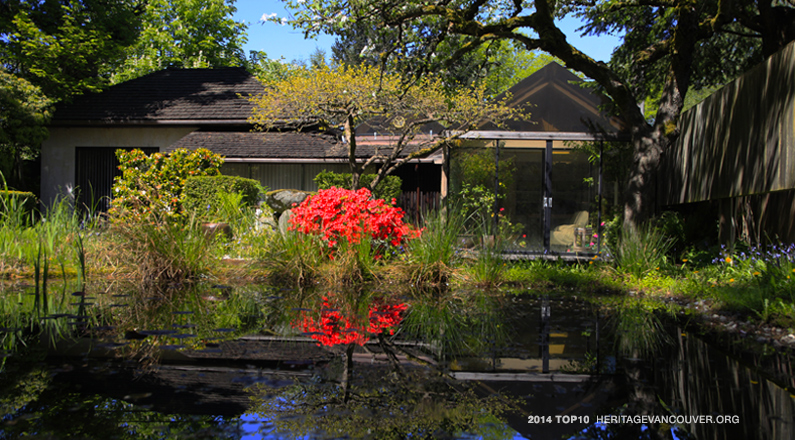 “The house and garden….have been the principal work place and residence of Erickson since 1957. As the locus of work, thought, and experimentation of an outstanding Canadian, and the country’s most renowned architect, it deserves the highest respect and must be preserved. In this converted garage and its attendant land, Erickson experimented with ideas of building and landscape that have been highly influential in architecture and garden architecture. They are a demonstration of how to make the most of standard city lots and to create a private meditative world within.”

—Phyllis Lambert, Founding Director of the Canadian Centre for Architecture

What is the Threat to the Arthur Erickson House and Garden?

Without being designated a heritage site and receiving appropriate funds and City-controlled entitlements for retiring outstanding debts, preserving and restoring the house and garden, the Arthur Erickson Foundation’s broad missions and objectives of fostering Arthur Erickson’s legacy, will be severely compromised by the loss of this unique iconic and historical site.

Why is the Arthur Erickson House and Garden Significant?

Arthur Erickson created distinguished buildings at home and around the world, in Vancouver, Simon Fraser University, the Museum of Anthropology and the Provincial Law Courts; elsewhere in Canada, Roy Thompson Hall in Toronto, the Bank of Canada in Ottawa, the Royal Canadian Mounted Police Headquarters in Regina, and Lethbridge University; in the United States, the Canadian Embassy in Washington, D.C., California Plaza in Los Angeles, the Museum of Glass in Tacoma, and the San Diego Convention Center; in England, the Napp Laboratories in Cambridge.

Erickson’s awards and honours were legion; Gold Medals from the Royal Architecture Institute of Canada, the American Institute of Architects and the French Academie d’Architecture; many honourary university degrees; honourary membership in Architectural Institutes all over the world; and Companionship in the Order of Canada.

Erickson acquired the site in 1957 when he was teaching at UBC. The garden that Erickson conceived as a setting for the house is considered to be one of the first and best examples of a modern, Northwest Style residential garden.

It was the constant focus of Erickson’s life throughout the dramatic arc of his career and is valued as the most personal expression of his design philosophy. During the 1960s and 70s, as his international reputation was established, he opened offices in other world cities but maintained this as his home base and sanctuary where the majority of his great works were conceived. He retained the original converted garage at the rear of the property, which was renovated as an 850 square foot dwelling, set in a landscape that he described as “a forest clearing in some indefinable wilderness.”

The house is surprisingly modest for an architect of Erickson’s reputation and demonstrates his belief that one can live simply and well in small spaces.

There is a rich tradition of saving historic homes of significant artists and making them available for commemoration and community use. Among the many famous examples are:

Vancouver would be much diminished by the loss of Arthur Erickson’s internationally-recognized home and garden.

The Vancouver Heritage Society endorses the preservation and restoration of this significant site and supports the Arthur Erickson Foundation in its efforts to obtain funds, including private donations, and strategic entitlements from the City of Vancouver, as well as to have the Arthur Erickson house and garden declared a heritage site.

The Arthur Erickson Foundation has framed a business strategy for the restoration and ongoing operation of the house and garden property through income, donor support, volunteerism and application of heritage bonus incentives by the City of Vancouver. This business strategy is balanced, realistic, timely and smart.

We support the Arthur Erickson Foundation in this vital endeavour for our city, for the profession of architecture and for the memory of a great creative Canadian.