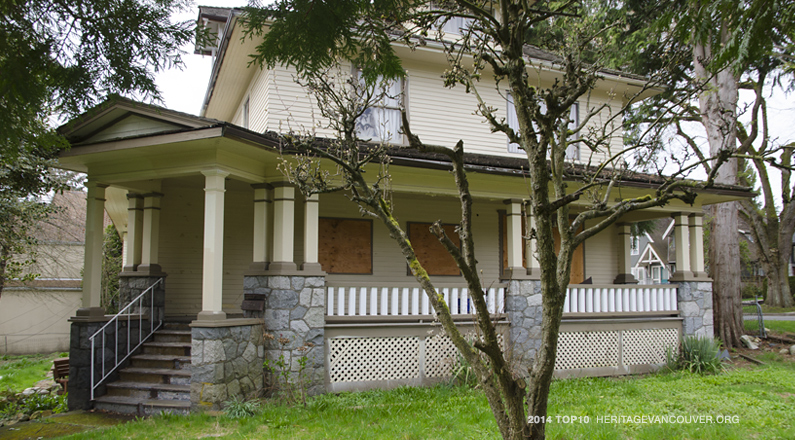 There is an immediate threat to two identified historic farmhouses, the Morrisette Farm house (1912) at 5503 Blenheim Street in Dunbar, a designated heritage building, and the Avalon Dairy in Killarney. The threat to these two early farm buildings, and the continuing demolition of others, demonstrates the necessity of identifying historic farmhouses that still survive.

Hopefully, more of these reminders of Vancouver’s agricultural past can be added to the Heritage Register, saved and restored.

What is the threat to Farm Houses?

Two farmhouses that have been recognized as significant and worthy of preservation are immediately threatened. The Morrisette Farm house (1912) at 5503 Blenheim Street in Dunbar was originally on ten acres. In 1998 the City permitted reconfiguration of the two lots on which it sits, allowing three units in the restored house, and a separate lot to the south. The house was designated, and a Heritage Revitalization Agreement completed.

The development appears to have stalled, and the historic house is now standing empty and deteriorating.

Avalon Dairy, 5109 Wales Street in Killarney was sold following cessation of its dairy operations in 2011. It sits on eight single-family lots, undeveloped except for the farmhouse. An application has been filed with the City that proposes retention of the farmhouse and construction of multiple family infill buildings around it. The original proposed design was not well received since it crowded close to the house and obscured its view from the street.

A revised scheme has finally been submitted that appears to be much more sympathetic to the context of the original farmhouse.

In addition to these two specific challenges there is a broader overall problem. There is no specific inventory of surviving farmhouses and they tend to be identified only by local anecdote and frequently too late to preserve them.

Recently in Kerrisdale, 2065 West 43rd and 2405 West 51st were identified shortly before they were demolished. Fortunately, in Marpole both 8010 Osler Street and 749 West 64th Avenue were both identified by community members during the recent development of the Marpole Community Plan, and were suggested as additions to the Heritage Register.

These examples illustrate the threat, but also the opportunity to develop possible solutions.

Why are Farm Houses significant?

As illustrated in Bruce Macdonald’s ‘Vancouver: A Visual History,’ in the early 1900s most of what is now the City of Vancouver consisted of undeveloped land. South of King Edward (25th) Avenue, only Kerrisdale, Hillcrest on Main Street, Cedar Cottage, Collingwood and Eburne (Marpole) were populated villages.

The land east of Nanaimo Street was similarly undeveloped. Some of the original forest had been cleared and had become farmland. Orchards, dairy and produce farms, some as small as 1.5 acres, provided food for the expanding city. The owners of these farms usually built their own homes, now surrounded by the urban growth of the city.

Most are relatively modest, but have historical significance as a record of Vancouver’s early agricultural and social history. There is no record of the continually declining number of these early farmhouses.

It is interesting to note that other municipalities do celebrate their agricultural past. The London Farm House in Richmond, the Stewart Farm House in Surrey, and Delta’s Burrvilla farm house on Deas Island are all owned by their municipalities and operate as Museums or cultural sites, and as programmed centres of community activity.

December 17, 2020
A development application (DP-2019-00971) has been submitted to the City, which would restore the home to a 3-family dwelling with a rear addition. View our letter of support for this long-awaited initiative >

February 28 2019
After the City released a stop-work order in January 2019 from unauthorized removal and work on a heritage building, the Morrisette former farmhouse has just been sold to a sensitive buyer, helping to now secure its heritage future.

January 2019
The City of Vancouver has issued a stop-work order for unauthorised work – original wood windows were being removed, replaced with vinyl, and apparently much of the interiors have been stripped down to the studs, removing period woodwork, stained glass, etc…

December 2015
The Morrisette farmhouse continues to sit, boarded up and vacant, and recently the upper windows have been left open in this unoccupied house, letting in the wind, rain, and who knows what else. Demolition by neglect underway?

Clause 593 (d) from the Vancouver Charter, clearly states that the owner of a designated property (such as the Morrisette Farmhouse) must not take any action that would damage the interior. Leaving the windows open displays willful neglect of this legally protected property.

Heritage designation protection
593. (1) Except as authorized by a heritage alteration permit or allowed under subsection (3) (f), a person must not do any of the following:

(3) A heritage designation by-law may do one or more of the following:
(c) apply to affixed interior building features or fixtures identified in the by-law;