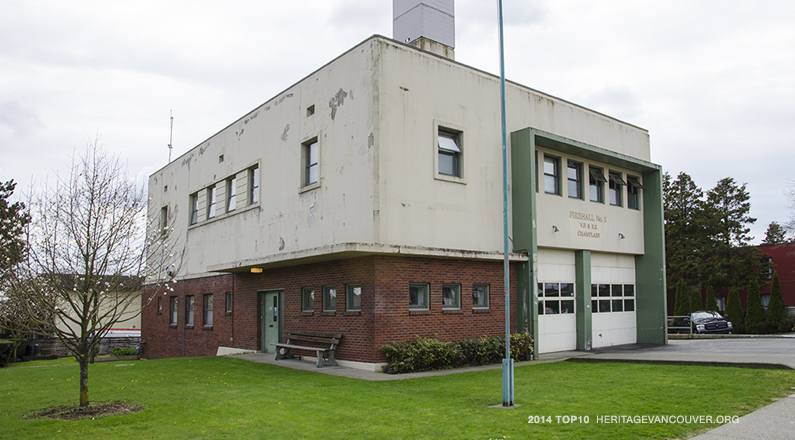 [Update – FIrehall No. 5 has been demolished] The City’s current plan is to replace Firehall No. 5 (1952) located at 3090 East 54th at Kerr with a new facility incorporating social housing. This is symptomatic of a general lack of consideration for the heritage value of postwar modernist architecture. It is important to give consideration to adapting No. 5 and other modernist firehalls to modern use or repurposing for another use rather than demolishing them.

What is the threat to Firehall No. 5?

In its present state, Firehall No. 5 no longer meets current seismic requirements, its driveway is too short for safe operation, and a third equipment bay is required along with additional space for training and fitness. It is slated for demolition, and a temporary fire hall will be set up to provide service while a new firehall, combined with social housing, is built in its place.

In December 2013, City Council appointed the YWCA Metro Vancouver as a leaseholder for 31 units of non-market rental housing to be constructed as part of the new Firehall No. 5 building. While the specifics of the City’s replacement strategy are unavailable it is likely that they will involve the demolition of the existing mid-century modern firehall.

All seven of Vancouver’s modernist firehalls are likely to be replaced due to code and functional requirements in the near future. These other firehalls include:

Why is Firehall No. 5 significant?

Firehall No. 5, built in 1952, is one of the oldest of seven mid-century modernist firehalls around Vancouver. Designed by Townley & Matheson – the architects of City Hall – it represents an important part of the movement towards modernist civic architecture in Vancouver during the post-war period.

Other examples of this style include the former central public library at Robson and Burrard, smaller neighbourhood library branches and the soon to be demolished East Wing of City Hall.

There are 22 firehalls throughout the city under the management of Vancouver Fire & Rescue Services, which employ 800 people. Firehall No. 5 alone responds to approximately 1,600 calls each year. It is necessary that these buildings be upgraded to meet current seismic requirements and user needs, however they are in danger of being demolished and replaced without consideration of their unique heritage merits or the possibility of updating, reuse or adaptation.

Firehall No. 5 is in a desirable location for affordable housing, with close proximity to a mall, a community centre and an elementary school. The City of Vancouver has a history of hybridization, and has already successfully formed a hybrid structure out of a firehall and community facility as can be seen in Firehall No .4, which includes a public library. It is perfectly reasonable to meet affordable housing goals by constructing non-market housing around Firehall No. 5. It is entirely possible to do so without demolishing the original heritage building.

Firehalls are very unique structures, with their large spans, unique architectural feature such as poles, open bays, and striking hose drying/training towers. These assets make them wonderful candidates for adaptive reuse, as can be seen in Vancouver’s Firehall Arts Centre.

Firehall No. 5, along with the six other post-war modernist firehalls throughout Vancouver, should be preserved and their character retained as they are updated to meet code requirements and changing user needs.

Formerly, City Council stipulated that a building must have been built prior to 1940 in order to qualify for inclusion in the Vancouver Heritage Register. Under the new Recent Landmarks Program however, which was established in order to recognize post-war era buildings with innovative design, technological features, or social significance, a building only 20 years old can be included.

Unfortunately, adoption of the results of the Recent Landmarks Program has been stalled.

We urge the City of Vancouver to: