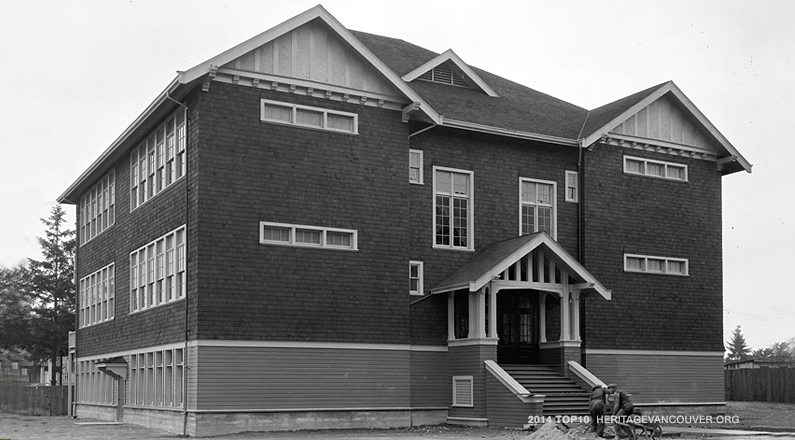 The buildings that make up the historic South Vancouver High School are just three of a number of historic schools that we could lose over the next round of the Vancouver School Board’s seismic mitigation initiative.

Heritage Vancouver believes that there is a great opportunity to make the schools safe for students and staff, promote the current excellence in education, and at the same time preserve our valued community heritage schools.

What is the threat to Sir Sandford Fleming and John Oliver Schools?

The immediate threat to our heritage schools is the provincial seismic mitigation program and the way it is being implemented in Vancouver. The Ministry of Education has recognized the need to address the seismic upgrading of public schools since the late 1980s.

As of August 2012, 143 seismic upgrade projects across British Columbia had been completed or were under construction. Only 21 of Vancouver’s 108 schools have been seismically renewed. According to the Ministry of Education, all of the high-risk schools that haven’t yet received attention are located in Vancouver.

Other provincial districts such as Victoria have nearly completed the upgrading of their schools. Most other communities have managed to seismically upgrade their schools without resorting to widespread demolition to provide a safe school environment.

The lack of adequate funding is the main reason the Vancouver School board gives for not being able to retain all their heritage schools during the seismic mitigation process. The cost of seismically upgrading the schools is inflated because for years the Vancouver School Board has deferred maintenance on these schools. Stripping architectural features instead of repairing them, expedient solutions to accessibility, postponement of modernization, makeshift additions and lack of maintenance now all have to be paid for as part of the seismic process. This makes it more expensive to retain the schools than to demolish them and build new schools.

The Vancouver School Board is also using the seismic process to build new schools, using the excuse that old schools are inadequate and outdated for today’s educational needs. As a result, existing facilities are abandoned to pave the way for replacement. A lack of creative thinking is the real reason for the condemnation of these historic buildings. Old schools can adapt and change if given a chance. Architects and designers can achieve the rejuvenation of school buildings, but are sometimes consulted after decisions are made.

The ‘Barn’ at John Oliver High School, for instance, is no longer in use for the first time since 1926; consequently, it is now unmaintained which increases the probability of eventual demolition.

During the current phase, the School Board will conduct public consultations. Schemes for different schools with corresponding cost will be presented as options between retention, partial retention and replacement, thus potentially providing an opportunity for real choices with sensitive alternatives.

Each school is different and each part of each school has different historical, architectural and social values. Capable designers will seek creative solutions to retain significant parts of the existing buildings. Unfortunately, the lack of information with respect to historic structures is a major obstacle to a successful design process. In-depth investigations into the significance of each particular school should be conducted in order to inform the design of renewed historic places.

The first South Vancouver High School was established in 1912, located in the original building at Lord Selkirk School; it is a frame building, designed by W.T. Whiteway and currently occupied by the elementary school.

In 1913, South Vancouver High moved to the corner of Knight and 49th to a new building called the Gordon School and renamed Sir Sandford Fleming Elementary in 1929. The building has been continuously used as an elementary school since 1921, and now includes additions from 1928, 1952 and 1959.

This original Classical Revival style brick-faced structure is representative of the impressive school architecture of the Edwardian era. Some of its features have been partially simplified, but many fine details remain.

Architect Joseph Henry Bowman, who specialized in school buildings and was the school board architect for both South Vancouver and Burnaby, designed the building. Bowman served as a founding trustee of the South Vancouver School Board, and he designed and supervised the construction of the Selkirk, Tecumseh and Sir James Douglas Schools in 1910-12.

Due to the continuously expanding student population, in 1920 South Vancouver High moved to the former location of the South Vancouver municipal hall, fire hall, and a sports field, and just south of Mountain View Cemetery, which made it a landmark site at the heart of the community.

The new high school was officially named after the premier of B.C. at the time, John Oliver, but it retained the name of South Van High until 1938. Architects Samuel Buttrey Birds designed the original building in partnership with the Twizell brothers, George and Robert, well-known institutional designers. In 1923, with an enrolment of 636 students, a four-room wing was added to the building. The entire building burned down in 1959.

The Senior Matric building, known as “the Barn” was opened in 1926; this Arts and Crafts building was designed by Bowman & Cullerne, and serves to remind us of the long educational history of the site. The educational value of the school lies in its role as a record of the building program that was needed to accommodate the great increase in school enrolment resulting from the post-First World War housing boom in the area, and increased expectations that young people should stay in school and graduate. Originally located on the west end of the site, “the Barn” is now located east of George Street.

A new modernist addition from 1954, which made this the largest high school in Canada, is now the main part of the current John Oliver High School. The aesthetic significance of the additions lies in the International Modernist style of the 1950, 1954 and 1965 additions, which is typical for Vancouver secondary schools built at this time.

John Oliver reflects the Modernist ideals of uncomplicated concrete frame construction, a minimum of embellishment, and an external expression of internal functions, all reflecting the intention to provide clean and efficient spaces that embodied ideals of social mobility and equality. The auditorium is especially valued by the community, as a large assembly space frequently used for public meetings. The architectural firm Mercer & Mercer, a father/son practice, is associated with the design of the additions.

We are informed that the John Oliver High will be demolished because its structure exhibits poor seismic resistance.

The cultural values of South Vancouver High School include the combined memories and experiences of past students and teachers, and its continuous history from 1912 to the current day. Through its physical development and changes to the community, alumni and former staff have sustained a very strong attachment and loyalty to each of these schools.

For many years the school was closely associated with South Vancouver’s first High School Principal, J.T. Palmer, from 1913 to 1936. Ken Macleod wrote a comprehensive book in 2012 on the subject of ‘The Story of South Vancouver and John Oliver High School’ that commemorates this significant history.

Heritage Vancouver fully supports the retention and restoration of the 1926 Barn Building on the John Oliver High School property, and the retention of signifiant parts of John Oliver High and Lord Sandford Fleming Elementary. We recommend that the retained building and elements of buildings become integral parts of the renewal of these important sites.

We strongly encourage the Vancouver School Board to: