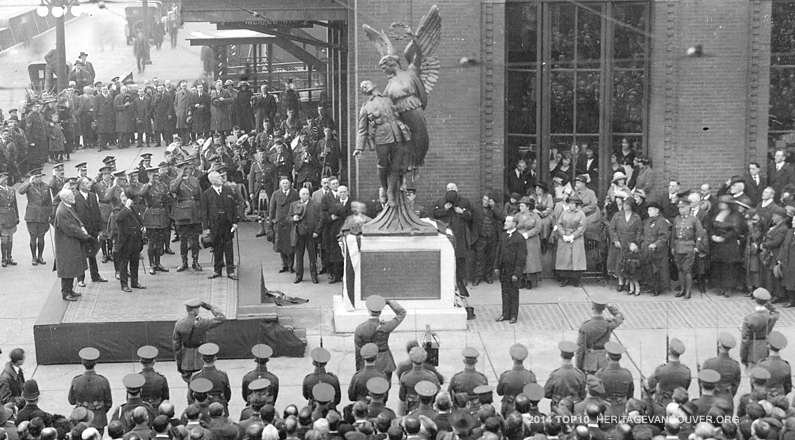 2014 marks the 100th anniversary of the beginning of the “Great War.” More than 600,000 Canadians served during this war, putting their lives on the line and altering the course of Canadian and world history.

After Armistice in 1918, monuments commemorating the lives of Canadians killed in overseas conflict have occupied a prominent place in our urban cultural landscape, rooting us to our history and reminding us of these monumental events. There are also memorials that commemorate others lost in World War Two and Korea.

Unfortunately, some of these significant memorials are neglected, deteriorating or are at danger of being lost.

Why are the ‘Angel of Victory’ and other Vancouver war memorials significant?

The official war memorial, which attempts to honour those who died, is a phenomenon that grew out of the First World War. Although monuments to individuals could be found earlier, there were few British or Canadian precedents for national memorials. The unprecedented violence of the “Great War” demanded a new form of commemoration, with memorials that expressed the unprecedented scale of human sacrifice that occurred between 1914 and 1918.

War monuments retain their capacity to erase time, and to preserve the memory of those who died for their country. In front of Waterfront Station in downtown Vancouver, the ‘Angel of Victory’ by Montreal sculptor, Coeur de Lion MacCarthy, depicts a winged angel lifting a young soldier to Heaven at the moment of his death. Copies were erected in 1922 in Vancouver, Montreal and Winnipeg at Canadian Pacific Railway Stations, and commemorated the 1,115 CPR employees killed during the War.

The ‘Angel of Victory’ is an important commemorative monument, which not only honours those who lost their lives in WWI, but is also an irreplaceable piece of public art which adds immensely to the urban streetscape, and has become a Vancouver landmark.

Vancouver has many other memorials that commemorate the people who served in WWI. The Cenotaph in Victory Square – dedicated in 1924 and very well cared for – is the most prominent, but there are many other plaques, sculptures and names on buildings that are not quite as familiar.

What is the threat to the ‘Angel of Victory’ and other Vancouver war memorials?

Sadly, the ‘Angel of Victory’ has not been well maintained and is not in good condition. It has already been moved from its original location, and has lost its prominence through later intrusions of outdoor patio railings, signs and furniture that crowd its site. In its current location, it sits forlorn and deteriorating, its significance compromised.

The two other identical statues in Winnipeg and Montreal are proudly taken care of, and have not suffered the same damage as the one in Vancouver. Our statue has gone green, which is natural for a bronze work exposed to the elements.

The real problem is that the soldier and angel are both covered in black soot, and have unseemly streaks streaming down their torsos. The angel’s wreath is broken and needs restoration.

However, inappropriate maintenance is also a threat. In 1967, wire brushes and detergent were used to scrub the “dirt” off the ‘Angel of Victory.’ It was, in fact, the usual patina of a bronze statue exposed to the elements, but scratch marks from that destructive cleaning can still be seen.

As buildings are renovated, war memorials can also disappear. Some examples include:

This type of action erases our history and removes our heroes from memory.

Our WWI and other war memorials should be protected, maintained and restored as an important part of our historical legacy. We must begin to think about how these unique and irreplaceable historic resources will be protected into the future.

We strongly encourage the BC Ministry of Health to: