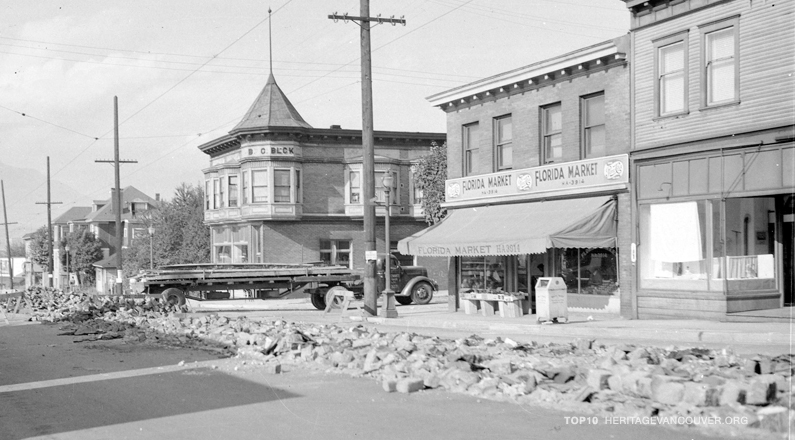 Commercial Drive has evolved over the years into a street that is an interesting mixture of textures, tastes, cultures and activities. It is outstanding not only for its significant heritage buildings but also for its sense of place, experience and uniqueness.

As Vancouver continues to grow eastward, the pressures to develop this site to its allowable four-storey height limit could create a dreary blandness that would destroy what is important about “The Drive.”

What is the Threat to Commercial Drive?

Under the City’s existing zoning, which provides for buildings of four stories, the appealing physical character of Commercial Drive could gradually disappear.

There are a number of ‘heritage buildings’ on The Drive, multi-storey, with good bones and design, providing both retail space and accommodation, which have no legal protection.

This is not a unique situation to The Drive, but it is the commercial strip with the highest concentration of potential heritage buildings with the least amount of heritage recognition; only seven of them are listed on the Vancouver Heritage Register.

For example, the east side of the 1300 block has the Dunedin Building at the southeast corner of Charles and Commercial: three-storey, brick-faced with three shopfronts on its main façade, a ‘heritage building.’

Next door, the eccentric, colourful Beckwoman’s is a single-storey shopfront, significant for half a century as Fiore Marini’s Shoe Hospital before Beckwoman’s established itself in the 1980s.

South of it, the two-storey Santa Barbara Market uses its extra setback to display fruit and vegetables, the kind of neighbourhood supermarket developers and planners dream of but are rarely able to achieve in new construction.

In addition to some of the larger, landmark buildings, there are many other single-storey commercial buildings, some of them very historically significant, that provide much of the texture and character to the street but would not be considered heritage buildings in the traditional sense and have no protection at all.

The fact that Commercial Drive is a region-wide destination for foodies, clubbers and to a lesser extent boutique shoppers, is driving rents up and forcing out independents and neighbourhood businesses but so far having little impact on the buildings themselves. The best example of this was the closing in 2013 of the Florida Market at Napier, which had been a mixed grocery store for a century and is now being repurposed as a restaurant.

This is the same cycle that went through Robson Street, Water Street, South Granville and 4th Avenue over the past two generations, and a similar process could threaten the Drive’s unique character.

The balance between serving local and regional tastes is under pressure on “The Drive,” as on the other historic streetcar commercial streets. Rising land values threaten to displace the local businesses and to attract new 3-4 storey buildings, with high-rent retail and high-cost residential above. This common building type that could lead to a very bland building mix is allowed under current zoning. To date, there are only two such buildings, one at Venables and the other, across from Grandview Park at Charles Street.

If the proposals outlined in the recently rejected Grandview Woodland Plan go ahead to create new developments and increased density at the Broadway/Commercial sky train node, this would also put increased pressure on the Drive.

Why is Commercial Drive Significant?

The historic section of Commercial extends from Venables Street south to 12th Avenue. The ‘Edwardian Village’ north of First Avenue is two lanes narrower than the southern section, with only one travel lane in each direction and curbside lanes for parking. This part of the Drive has a more enclosed feel that is in balance with the scale of the buildings, and traffic tends to travel at a slower speed.

Commercial Drive is Grandview’s main street and a popular destination for Vancouver’s residents and tourists. “The Drive”, as it is popularly called, began to take shape at the beginning of the 20th century as the local streetcar commercial street.

About 1967, Vancouver newspapers began to identify Commercial Drive as ‘Little Italy.’ The increasing Italian population after WWII in the blue-collar Grandview neighbourhood put a cultural spin on what had been a typical streetcar strip of shops. The Drive has continued to evolve as a lively mix of businesses, many of which serve the local community, as well as attracting increasing numbers of people from all over the region to its 90+ coffee shops, restaurants and taverns. The unique attractions include alternative cafés, bars, restaurants, theatre and music, car-free days, biking, strolling and, in Grandview Park, activities varying from children’s play to bike polo.

It is the mix of styles and building uses that gives Commercial Drive its unique flavour. The Drive’s businesses reflect the history, character and the evolution of the neighbourhood. Groups of Italian and Portuguese men can still be seen socializing outside the many old-style restaurants and coffee shops, or playing bocce in Grandview Park.

When Italy’s football club is playing, or during “Italian Day,” the street is immersed in Italian culture. Italian day, 2014, celebrates ‘Made in Italy’ from inventions to Italian goods and lifestyle and products of Italian history and culture found in Grandview’s very own backyard. The Co-op bookstore was once home to the Communist Party of Canada.

Many food stores are reminiscent of Vancouver’s hippie days. A number of long-established shops and cooperatives, including the Reach Clinic, reflect the radical beliefs of the 1970s, while others hint at the area’s long-standing reputation as the centre of the city’s lesbian community; and, the high-end maternity and children’s clothing stores reflect the young families now living in the neighbourhood. In restaurants and clubs up and down The Drive, live bands create the funkiness the neighbourhood is popular for.

Independent businesses, most owned by individuals and families, create a one-of-a-kind feeling to the shops. Chains and big box stores have not made their way to this fascinating street.

It is not just the range and type of businesses that give the street its unique character. The mix of building styles, heights, rooflines and setbacks all create interest and variety and add to The Drive’s ambience.

Between Grant and Kitchener, for example, the undulating roofline of the one, two and three-storey buildings and their uneven setbacks create a very urban rhythm, offering small spaces for buskers and larger ones for sidewalk displays of food and merchandise for sale. Some buildings have a floor or two of apartments above; most storefronts are just 25 feet wide, presenting a rapidly-changing set of window displays for the passing pedestrian.

This is probably the best pedestrian street in the city, its crowded sidewalks attesting to the success of The Drive as a piece of urban design.

Heritage Vancouver fully supports maintaining both the built form and the unique mixture of businesses that give the Drive its character. The Drive has evolved over the years to adapt to new populations and philosophies and it is important that this type of evolution continue without destroying the very essence of the street.