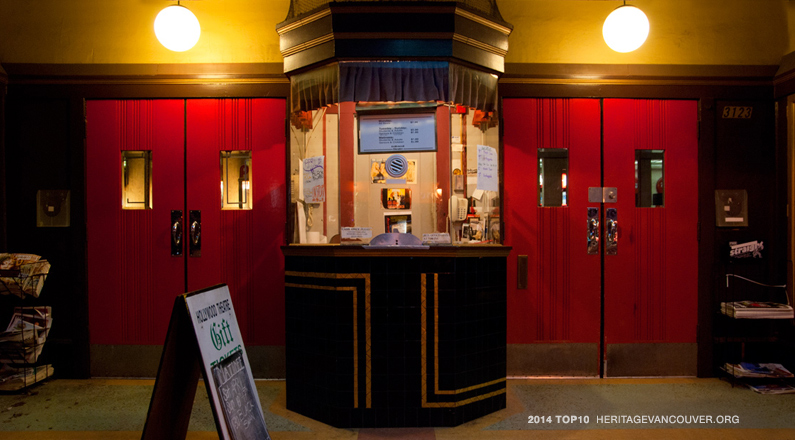 The Hollywood Theatre is a precious community landmark built in 1935-36. This intact Art Deco theatre is important for its unique interior and exterior architectural features and its use as a community cultural space. It is one of our last intact neighborhood theatres. The current owner has not expressed interest in retaining the interior of this significant theatre and has not found a buyer who would maintain its public assembly use.

What is the threat to the Hollywood Theatre and community cultural spaces?

All eyes are focused on the outcome for the Art Deco Hollywood Theatre (1935-36) at 3123 West Broadway. Bonnis Properties purchased the Hollywood, and its doors were closed as a theatre in May 2011. Bonnis had planned to redevelop the property and open a 2-storey American chain fitness centre, however, the City of Vancouver placed a 90-day moratorium on any Development Permit to demolish or renovate this property.

Despite this effort, the future of the Hollywood remains threatened.

To date, despite a concerted community effort to save the theatre, no buyer has come forward with a commitment to retain the Hollywood as a cultural community space. The death of the Hollywood would impact our city threefold: the failure to retain a cultural community asset; the loss of its iconic architectural presence on West Broadway; and last, but not least, the theatre’s splendid interior space and details will be gone forever.

One by one, Vancouver’s historic movie theatres are closing, leading to the loss of beloved neighbourhood landmarks and cultural spaces. We have lost many historic theatres in recent years, including the Varsity on 10th Avenue, the Imperial (1910) (last known as the Venus) on Main Street, the Van East Cinema on Commercial, the city’s oldest theatre, the Pantages (1908), The Fraser on Fraser Street, and most recently the Ridge Theatre (1949). We are now at risk of losing The Hollywood. Dubbed by the entertainment industry magazine Variety as ‘the Nabes’, neighbourhood theatres were the backbone of the massive North American movie distribution network. They were an essential part of our community cultural life for many decades. Most are now lost, and we are at risk of losing the few that are left.

Vancouver has been in a vicious cycle for years, losing more venues for music, independently run movies and the arts than are being created. This trend was noted by the Mayor’s Engaged City Task Force, which heard from people across Vancouver that we were losing venues and cultural spaces where people could congregate, perform and celebrate. A number of our neighbourhood cultural and entertainment centres remain under threat: our communities run the risk of permanently losing valuable historic buildings as well as our cultural venues. These historic, cultural, and socially significant community spaces continue to be undermined by high land value, competing priorities and the lure of new commercial ventures.

Old buildings that gain new life as a nightclub or a bar can become victims of their own success by making the property more desirable. That can trigger higher rent, higher property assessments and higher taxes, which all get paid by the business owner. Over time the business can no longer make a profit, or the landlord decides to sell because of its increased value.

One of the saddest urban stories in Vancouver was the teardown of the historic Pantages Theatre (152 E. Hastings Street, 1908). It was the oldest remaining theatre in Vancouver, the oldest remaining Pantages theatre in North America, and one of the oldest purpose-built vaudeville theatre interiors in Canada. According to the owner, Marc Williams, he couldn’t find a way to save the theatre as it fell into disrepair from water damage. Despite the longstanding support of Vancouver Heritage Society and other community groups to save this iconic building, the theatre was torn down in April 2011 and as yet nothing has replaced it.

Most recently, the iconic mid-century Ridge Theatre (3131 Arbutus Street, 1949), was demolished by Cressey Development Group in October 2013, to be replaced with a 4-story condominium development. Community members had rallied to save both the Ridge Theatre as well as the Varsity Ridge Bowling Lanes, but in the end neither of these vital establishments were saved.

We are losing the places where communities can gather and experience the creative culture of our city. These are unique facilities that help to define Vancouver, as envisioned in the City’s Cultural Plan, as “a city of vibrant, creative neighbourhoods.” Finding innovative ways to re-imagine these cultural spaces, as local amenities will help to sustain urban vitality and a unique sense of place.

If our historic theatres are lost, we are unlikely to see this kind of neighbourhood community space constructed again. The cultural life of Vancouver is being severely diminished by these continuing losses.

What is the significance of the Hollywood and the preservation and/or adaptive reuse of community cultural spaces?

Its architect, Harold Cullerne (1890-1976), designed the concrete, streamlined Art Deco theatre with glamorous, exotic features, such as hieroglyphic decorations at its roofline, a ticket booth of black and gold tile and colourful neon signage. Its vintage interior includes a sign reading ‘loge’ pointing the way to balcony seating. Prior to its closure, this single-screen theatre was identified as the oldest family-owned and operated cinema in Canada.

Community cultural and entertainment venues are unique facilities that define our urban landscape. Finding innovative ways to retain them helps to sustain our vitality as a network of diverse histories, aspirations, and future goals. If these buildings are lost, we are unlikely to see this kind of neighbourhood community space constructed again.

We have seen similar situations where theatre space has been retained successfully for public use, including The Orpheum, the crown jewel of our Civic Theatres, that was almost lost in the 1970s, the Stanley Theatre, almost gutted for use as a retail complex and saved at the last minute, and the recently re-opened York Theatre. These are vibrant community assets that will continue well into the future as neighbourhood anchors and cultural icons.

The Waldorf Hotel (1489 East Hastings Street, 1947-1955), one of the most renowned Tiki-themed hotels in North America and also one of Vancouver’s most popular music venues, was sold to Solterra Group of Companies, in January 2013, with immediate plans to rezone the property for condominium development. Although public outcry to save the this cultural institution have currently deterred the wrecking ball, it has – temporarily, we hope – lost its identity as a hub for Vancouver’s art, music, and culture scene.

Since its evolution in 2008, the Rio has hosted Hollywood blockbusters, local independent filmmakers, midnight screenings of cult classics, the toddler-friendly ‘Movies for Mommies’ series, local and international film festivals, comedy festivals, queer film events, burlesque shows, screenings and tours for local public schools, political events, religious services, spoken word and other live performances, and local and international live music. They have also won the right to serve alcohol at select film and live performances in May 2012, after a long and arduous battle with the Liquor Control Board of BC and City officials.

The Stanley Industrial Alliance Stage (formerly the Stanley Theatre, 2750 Granville Street 1930) is a landmark theatre that serves as the main stage for the Arts Club Theatre Company. This building, with an Art Deco façade and neo-classical interior, first opened as a movie theatre in December 1930, and showed movies for over sixty years before falling revenues led to its closure in 1991.

After years of threatened commercial redevelopment, the Stanley was renovated as a stage theatre in 1997–98 and subsequently awarded status as a heritage building. Money came from fundraising campaigns by the Arts Club and Vancouver TheatreSports, $3.9 million from the provincial and federal government, a $100,000 grant from the City of Vancouver, the purchase of a density transfer by Peter Wall (developer of Vancouver’s Wall Centre) for $1.2 million, as well as corporate sponsorship by du Maurier who contributed $1.2 million.

The Stanley’s renovation has brought positive economic effects to the theatre’s local area on South Granville, and this neighbourhood has become more of a leisure/recreation destination, with many new culturally-related businesses, art galleries, retail stores and restaurants The retention and adaptive re-use of this historic neighbourhood theatre has had an immensely positive effect on the community.

Could similar solutions be implemented to save the Hollywood Theatre, which could have a similar positive impact on West Broadway?

Heritage Vancouver supports the retention of the Hollywood Theatre in the form of a theatre or cultural community space.

We believe it is important for the City of Vancouver to use all heritage tools available, such as transfer of density to the adjacent site, in order to attract an owner that understands the value of retaining a ‘sense of place’ which extends one’s experience from the street all the way to the stage of this theatre.

The preservation of just a façade is not a suitable outcome, especially if significant incentives are being offered. The retention and protection of historic interior features should be a condition of any development on this site.

Heritage Vancouver recognizes the unique cultural and social value of community cultural spaces and theatres that contribute to the identity, character and vitality of the city’s neighbourhoods.

Given the uncertain future of some of our cultural landmarks such as the Hollywood Theatre and other vital cultural spaces, we strongly encourage the City of Vancouver to: