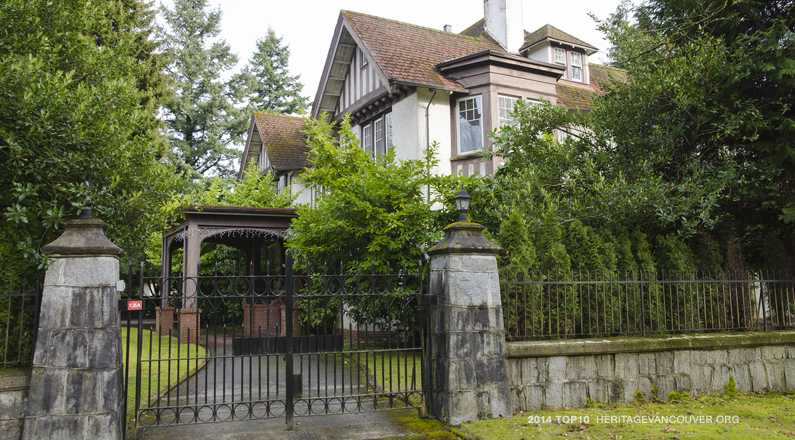 With the upcoming review of the effectiveness of the 1982 First Shaughnessy Overall Development Plan, requests for demolitions are piling up at City Hall. Architects are targeting the pre-date (1940) revered and treasured houses, in an attempt to get demolition approvals before any real constraints are enacted.

What is the threat to the Fleck Mansion & First Shaughnessy?

Fifty-one houses in First Shaughnessy have been demolished since 1982, and if the trend towards demolition continues, many more will be lost. If the City takes no action, the Fleck Mansion as well as our three other featured heritage homes will be the next to go.

The buildings that have replaced the heritage houses suffer from a “billboard” expression, a flat façade that stretches from side yard setback to side yard setback, pushed down by a 35″ height roofline. Osler Street is lined with neglected heritage homes and oversized modern mansions.
Any new retention schemes usually feature new wings larger than the original block, with very little facade retention, which then resemble the new-built oversized Mansions. With both the retention schemes and new developments, the gracious heritage homes and the ‘estate like’ quality of First Shaughnessy are eroding rapidly.

In 1981, First Shaughnessy residents, alarmed by spot zoning townhouses proposed for the 3700 block of Hudson Street, voted in favour of the new Overall Development Plan to make the primary objective the need to “preserve and protect Shaughnessy’s special character through the retention of pre-1940 houses of merit.”

Unfortunately in 1994, after losing only six character houses in thirteen years (1981-1994), the legal department was challenged by developers to allow demolition for new houses, despite their heritage status, and the floodgates opened.

To protect the character houses, The City of Vancouver Planning Department has recently asked for a ‘Merit Evaluation’ which determines the amount and value of heritage character in a structure. This is not unlike the more stringent evaluations that have been so effective in preserving Kitsilano north of Broadway (RT-7 and RT-8).

The Fleck Mansion (1924) as well as the three other currently threatened homes are judged to be houses where “retention is required by Planning staff.” The guidelines ask for the architect to present a retention scheme for the existing pre-date houses even if demolition is in the works. We have not yet seen evidence of such schemes for this year’s threatened houses.

Unfortunately, the City’s Legal Department says that aggressive owners can demolish their houses regardless of Planning’s Merit Evaluation.

What is the significance of The Fleck Mansion & First Shaughnessy?

The handsome Fleck Mansion was designed for businessman Bryce Fleck, by talented architects Honeyman & Curtis in 1924. This Mansion has recently been recommended as an ‘A’ on the City of Vancouver Heritage Register.

It is noted for its prominent porte-cochere and the dramatic curved gable on the front-facing library. The Fleck Mansion was the first Vancouver ‘show house’ used as a fundraiser for the Vancouver Symphony in 1971. The Governor General opened the three-week event showcasing the lavish refitting of the interior, which includes a reverse stairway with a landing over the front entry, with wainscoting and turned baluster railings. It also includes a library with 10-foot ceilings, a large reception room panelled in oak, and an ensuite bathroom that features a ‘Casa Loma’ walk-in shower with concentric rings of chrome tubing. The estate, with its encircling granite wall, anchors one corner of The Crescent.

First Shaughnessy was developed in 1907 by the Canadian Pacific Railway Company to entice the city’s elite to move from the West End to the newly-cleared area on the hill above 16th Avenue up to King Edward Avenue, with lots a minimum of 10,000 square feet. Curving streets were laid out on topographical lines, rather than the grid system common in most of Vancouver.

Second Shaughnessy was created with smaller lots between King Edward and 37th Avenues.

First Shaughnessy, the grandest subdivision on the city, is known for its ‘estate-like quality’ and its leafy ambience. The original building envelopes generally had a smaller footprint, usually about 2,000 square feet per floor, and a taller height – averaging about 42 feet. This allowed more site area for landscaping to frame the heritage ‘English Picturesque Aesthetic,’ the estate-like quality that Vancouver residents treasure.

We believe the immediate rush to demolish the fine old homes and estates of First Shaughnessy is irrevocably destroying the neighbourhood’s heritage character.