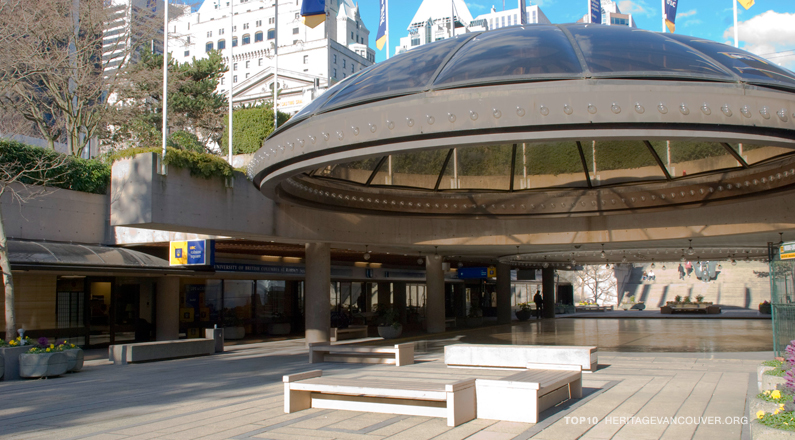 Robson Square is home to the Arthur Erickson-designed provincial buildings that put Vancouver on the map. Proposed changes to internationally-famous Robson Square threaten its design integrity.

What is the threat to Robson Square?
The Provincial Government is currently proposing structural changes to Robson Square as part of its preparation for the Olympics. The original domes over the Skating Rink have been sacrificed for new lower domes, and there are plans to add intrusive new staircases down from Robson Street, rather then re-use the existing staircases. The first design for the staircases was soundly criticized by both the City’s Heritage Commission and Urban Design Panel. Another design is being submitted, and this may be only the first of a number of proposed changes that could erode the integrity of Erickson’s masterwork.

Why is Robson Square significant?
Robson Square is home to the Arthur Erickson-designed provincial buildings that put Vancouver on the map. It is an internationally-recognized masterwork that is still substantially intact. Robson Square won the prestigious American Society of Landscape Architects President’s Award of Excellence in 1979, where the jury commented on the “extraordinary integration of landscape architecture with architecture–consistent and coherent.”

Envisioned by Arthur Erickson and Cornelia Oberlander as a “linear urban park, importing nature into the city” and pioneering one of the first major uses of green roofs in North America. The complex is internationally recognized as a masterwork of modernist architecture. This is one of Vancouver’s most instantly-recognizable, famous and unique complex of buildings.

History
Built over six years starting in 1973, Arthur Erickson’s design for the three-block project known as Robson Square uses concrete and glass as the predominant building materials – the forms are simple and rectilinear, employing verticals, horizontals and terraces, softened by the pools and green spaces designed by renowned landscape architect Cornelia Oberlander.

In 2007 The Provincial Government announced plans to build a giant wooden “clamshell” spanning Robson St. to provide a covered ‘live site’ showcasing BC wood products during 2010 Olympics and remain after the Games as a permanent ‘legacy’. This would have been an urban design mistake of epic proportion, and fortunately the resulting public outcry caused the cancellation of the Clamshell.

Heritage Vancouver’s Position
Heritage Vancouver urges the Provincial Government to undertake a more architecturally sensitive approach to Robson Square. There needs to be an overall Conservation Master Plan that focuses on the preservation of the site’s heritage, urban and architectural character, and conserves the character of the seamlessly integrated landscaping. No further work should be contemplated until this overall Plan is in place.

We also urge the City of Vancouver to list Robson Square on the Heritage Register, so that the stewardship of this masterwork can be continually reviewed and monitored.