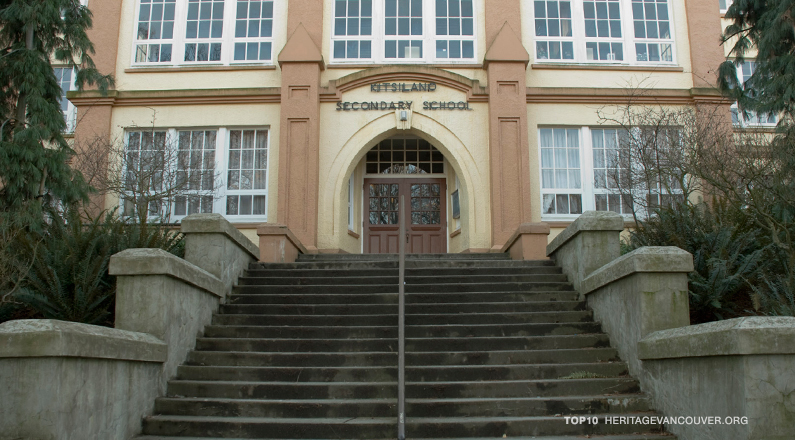 The Ministry of Education’s formula for seismic upgrading heritage schools threatens many of Vancouver’s heritage schools, Kitsilano Secondary is most immediately under threat.

What is the threat to Kitsilano Secondary School?
The possibility of Kitsilano Secondary School being completely or partially demolished is very real. Two options, currently being tested on the school website involve demolition of the school or demolition of all but significant portions of the 1928 heritage classroom block. Only one of the options calls for the complete retention of this significant heritage school.

Kitsilano could well be the next victim of the BC Ministry of Education’s Seismic Mitigation Program. The Ministry’s current funding formula favours new schools with approximately 2/3 of the square footage of the existing school over seismically upgraded heritage schools.

The Ministry’s formula does not take into account the heritage significance of schools and threatens the future of all of Vancouver’s heritage schools. Unless the funding formula is changed, Kitsilano may go the way of Dickens School, which despite tireless efforts by the community, was demolished in the summer of 2008.

This historic school, a local landmark, was originally built on an impressive scale and reveals the high value the community placed on public education. Its main building is set prominently on a rise along West 10th Avenue. Adding to the imposing nature of the building are three stairways set into the school’s strikingly landscaped grounds. Each stairway consists of rounded concrete walls and columns leading from the sidewalk at the corner edges of the property onto the grounds of the school. An additional grand stairway centered on 10th Avenue leads to the main entrance.

Of particular interest are the three arched recessed entrances facing 10th Avenue, of which the main central entrance is adorned with the school name and leads into an inner lobby displaying a student memorial to those who died fighting in WWII. The building’s interior was designed to be naturally lit, with high ceilings, which permit large operable windows and good ventilation and broad hallways boasting natural light.

The original main three-storey structure facing 10th Avenue was designed by Vancouver School Board staff architect Frank A. A. Barrs and built between 1926 and 1928, in the Collegiate Gothic style popular for learning institutions at the time.

In 1958, as the neighbourhood grew to accommodate the post-WWII housing construction boom, a Modernist-style addition designed by school architect Allan B. Wilson was erected to the south side of the original building.

Later, a third expansion occurred in 1973 with the addition of a single storey exposed concrete structure on the southeast corner of the property. All of these annexes revealed changing approaches to both education and architecture.

History
In 2005 the BC Ministry of Education introduced the Education Seismic Mitigation Program to seismically upgrade or replace schools at risk from earthquake damage, The Ministry applied a funding formula that limits the cost of a seismic retrofit to 70% of the cost of the construction of a new ‘purpose built school’. These schools usually have 2/3rd of the square footage of the existing school.

In 2007 the City of Vancouver and the Vancouver School Board contracted with Commonwealth Historic Resource Management Limited to produce a document entitled “Vancouver Schools – Establishing Their Heritage Value”. This study did a casual heritage assessment of all Vancouver’s schools with the objective to identify and prioritize schools with heritage significance. This was to ensure that decisions to upgrade or replace schools are informed by potential heritage values. The recommendations of this report have yet to be approved.

In August 2008, the Vancouver School Board contracted with Commonwealth Historic Resource Management Limited to write a Statement of Significance for Kitsilano Secondary School.

In September 2008, The School Building Closure and Disposal policy was created to limit school districts’ ability to dispose of school properties without government approval.

In February 2009, the Kitsilano Parent Advisory Council and its School Renewal-Seismic Mitigation Committee, in collaboration with the Vancouver School Board, hosted a survey, a public open house and a public workshop regarding the options of school seismic mitigation/renewal for Kitsilano Secondary School with the objective of creating the concept of what the ideal neighbourhood school might look like. The process is ongoing.

The seismic upgrading and the restoration of both the buildings and grounds will ensure that Kitsilano Secondary continues to be a superior educational institution and a community landmark.

We urge the Ministry of Education to change its current funding formula and to come up with other creative ways to seismically upgrade and preserve our heritage schools.