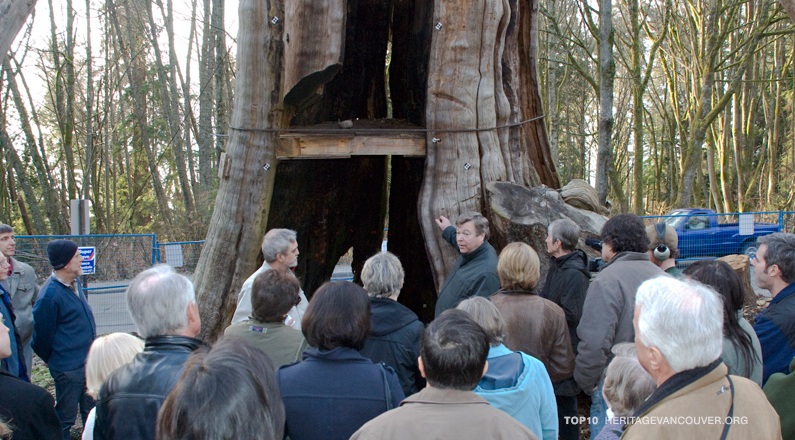 The Park Board’s lack of interest in playing a stewardship role for the long term protection of this cultural icon threatensThe Hollow Tree.

What is the threat to The Hollow Tree?

Lack of awareness of its long and important history currently threatens The Hollow Tree. The restoration of the tree depends on the generosity of individuals who are donating their time and money without assurance from the Park Board that once the tree is stabilized they will undertake the long-term maintenance of this iconic resource in one of their parks.

This general lack of proper attention paid to the Hollow Tree follows a pattern established by various Park Boards over the last century. First they intervened with the biggest trees too much, typically severely topping, trimming and then cutting them down. Now they have gone to the other extreme, insisting on little or no intervention.

While this natural approach may be appropriate for some of the trees in the forest, it should not be applied to The Hollow Tree. The Hollow Tree has been dead for a long time, a road has encircled it since about 1887, pavement has surrounded it since 1912, and iron braces have held it together since 1965.

The Stanley Park Hollow Tree has a special place in the memories of many Vancouverites. Today the western red cedar is BC’s provincial tree, and The Hollow Tree is a wonderful local reminder of the majesty of our original forests.

The Hollow Tree is one of Vancouver’s oldest and most famous landmarks, a rare surviving example of the enormous trees that originally drew the first group of non-Native people to settle in Vancouver in the 1860s. These settlers came to cut down the tallest and greatest trees in Canada that comprised forests of enormous fir, spruce and cedar.

The Hollow Tree has been an important part of Vancouver’s tourist industry since the city was founded. It appears in most international tour guides and is a symbol of the uniqueness and greatness of Vancouver, British Columbia, and of Canada. Cedar and salmon have been the two main distinguishing features of local Native culture for perhaps 10,000 years and the tourist industry today still focuses on them. For local First Nations peoples, the cedar tree was considered to be the “tree of life.” Cedar had innumerable uses, from building homes, furniture and canoes, to making clothing and a variety of tools, to creating medicines and masterful works of art.

Recently a replica of The Hollow Tree made from a giant cedar from Stanley Park served to greet people from all over the world as they entered the BC-Canada Pavilion at the 2008 Beijing Olympics. The Vancouver 2010 Olympic Committee is using the Hollow Tree in its promotion of the Olympic mascots. An Olympic children’s book and a promotional animated film have been produced that show how the Olympic mascots came to meet each other and go to the 2010 Olympics. Quatchi is shown arriving in Vancouver at night, and he discovers the Hollow Tree as a place to stay. Miga happens to come by, they meet, and Quatchi takes her picture at the Hollow Tree in classic Vancouver fashion.

History
The Hollow Tree has existed on the west side of what is now Stanley Park for approximately 1,000 years.

When the city of Vancouver was created in 1886 from the tiny logging village of Granville, the first elected city council made a motion to create Stanley Park at the first city council meeting. Shortly after, a road was constructed around the perimeter of the new park and it ran directly to the Hollow Tree and was curved around it. The Hollow Tree soon became a ‘must see’ attraction for visitors and new arrivals to the city, who invariably were urged to take the trip around Stanley Park.

In December 2007 the Park Board noticed the Hollow Tree was leaning heavily to the east and announced it had been damaged in the great windstorm that had devastated Stanley Park. As a solution, the Park Board voted unanimously to cut it down in March 2008. A number of speakers at that meeting opposed its destruction and came together with other concerned citizens a few months later to form the Stanley Park Hollow Tree Conservation Society. They subsequently joined forces with Heritage Vancouver in recognition of their common interest in conserving the Hollow Tree.

In January 2009 the Park Board approved the Stanley Park Hollow Tree Conservation Society’s detailed engineering plan and a strategy to raise public money to intervene to conserve the Hollow Tree.

Heritage Vancouver supports the retention and on-going maintenance of this symbol of the unique history of the city and our long-term connection to the environment.

We urge the Park Board to view the Hollow Tree as a cultural icon rather than as an ordinary tree that has reached the end of its life span.

We also urge the Park Board to embrace its stewardship role of The Hollow Tree and commit to the long-term maintenance of this unique and irreplaceable resource. It is really a monument now, and should be maintained as such in perpetuity.

Through an incredible amount of volunteer effort, time, donations, and resources, Stanley Park’s Hollow Tree has been stabilized, and saved for future generations.

For more information or to give a donation:
Stanley Park Hollow Tree Conservation Society (SPHTCS)
www.savethehollowtree.com

The Hollow Tree, documentary
Filmed by Ramshackle Pictures, the almost hour-long video documents the saga in saving The Hollow Tree.

Watch below, the trailer for the documentary about the restoration of Vancouver’s fabled Hollow Tree: