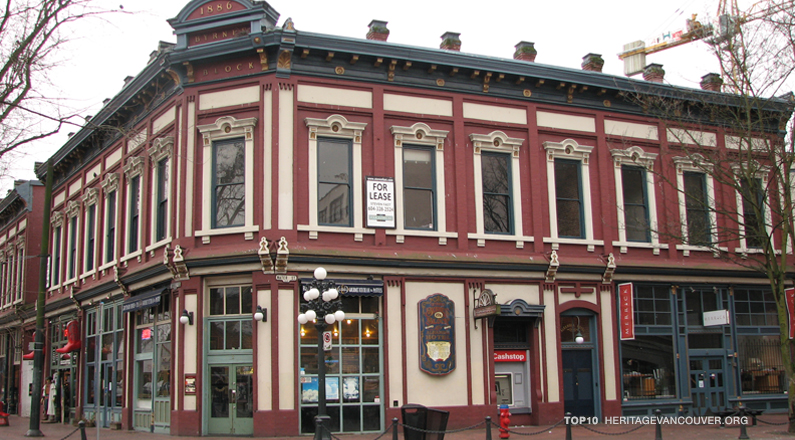 Many City Hall recent initiatives, freeze on the transfer of density, lack of other incentives and the threat of over height buildings threatens the integrity of Vancouver’s Historic Precinct.

What is the threat to the “Historic Precinct”?
City policy is threatening the historic precinct from two directions. The freeze on the transfer of density program has seriously undermined the financially viability of area-wide revitalization and individual rehabilitation projects. At the same time, heights are being considered that could forever destroy the historic urban fabric of the seesaw streetscape and a human scale at street level that residents and visitors value as the experience of Gastown, Chinatown, Victory Square and Hastings Street.

123 East Hastings illustrates the potential future of Hastings Street. On the City’s Heritage Register, but situated in a precinct with no protection as a “Historic Area”, it will be vulnerable to redevelopment. There is enough land to assemble to build a tower. Imagine how such height would overwhelm the historic corner of Hastings and Main and the streetscape looking towards the West where the Woodward’s project is now dominant. The character of the “historic precinct” will lose its heritage value.

Weakening of the transfer of density tool and an increase in heights will effectively gut the Gastown Heritage Management Plan and, more insidiously, could destroy the very character of Vancouver’s first neighbourhoods.

It is ironic that these threats to our historic heart of Downtown started less than two years after the City received a Provincial Heritage award for excellence in heritage conservation for the Heritage Building Rehabilitation Program.

It is equally ironic that as cultural tourism is increasing by 15% annually, Vancouver is introducing measures that could effectively destroy our historic precinct.

Why is the “Historic Precinct” significant?
The City of Vancouver has long recognized the significance of early Downtown areas, including the “historic precinct” identified in the EcoDensity Charter Actions: Gastown, Chinatown, Victory Square and the Hastings Street corridor.

In 1971, The Province designated Gastown and Chinatown as “Historic Areas”. In 2002 the city adopted the Gastown Heritage Management Plan to retain the heritage character of Gastown including the distinctive sawtooth urban typology and height limits of 75 feet.

Hastings Street is not officially identified as a Historic Area in the Downtown Eastside Development Plan, and has no management plan, although some buildings are included in the Heritage Register, such as 123 East Hastings Street.

123 East Hastings Street, built in 1903, is a small, two-storey stone Edwardian building close to the corner of Hastings and Main Street. This intersection was the heart of the city’s early commercial high street, including the City’s former main library (now the Carnegie Centre), shops, hotels, and boarding rooms for workers in the fishery, forestry and other sectors.

123 East Hastings is typical of the Hastings streetscape of the boom era—a small-scale, two storey commercial building with first floor retail and residential use above. Originally, the premises operated as a shoe store, barber and an employment agency—all for male labourers. The Goodwin Shoe Company was here from 1908 until the 1920s.
Designed by architect George William Grant, this modest building is also a rare example of the Art Nouveau style in its upper floor ornamental details on an otherwise utilitarian Edwardian facade. The exterior of the upper floor, including the attractive decorative features, remains largely intact.

History
To defray some of the costs of revitalization in the historic precinct on a site-by-site basis, the City of Vancouver has granted incentives to building owners in Gastown, Chinatown and Hastings Street for seismic upgrades, alternations and restoration. One of the incentives, “the transfer of density to sites outside of the Historic Areas” proved to be hugely successful—apparently too successful—and a freeze was placed on this very effective heritage conservation tool in 2007.

The City’s EcoDensity Charter adopted in 2008 has formalized an ongoing Height Study in the historic precinct that is reviewing the urban typology of Gastown, Chinatown and Hastings Street and identifying “special sites” to absorb increased density through infill and the addition of tall buildings, similar to the Woodward’s project. 123 East Hastings Street could be one potential site for intensification. Situated on the north side of Hastings Street, it is adjacent to a medium-sized vacant lot. This building is currently not in use and has a boarded up storefront.