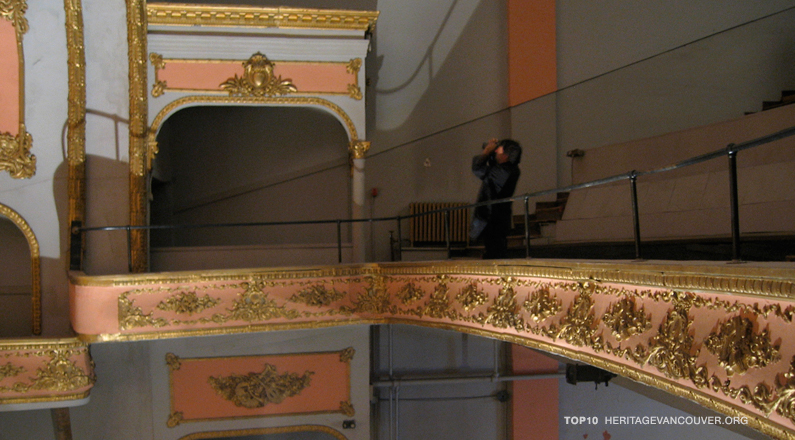 The current owner has plans to demolish the theatre and redevelop the site. No alternative has been found to save the Pantages.

What is the threat to the Pantages Theatre?
The historic Pantages Theatre is at imminent risk of demolition and faces an uncertain future. The current owner who inspired the community with his ideas to restore and reopen the Theatre was unable to reach a deal with the City of Vancouver. He has put the Pantages up for sale, will soon submit a development permit application and at the same time apply for a demolition permit.

The building follows the trend of early theatres in having a plain, office-like, exterior that conceals an ornate interior. Vancouver’s 1908 Pantages exhibits intact plasterwork with detailed scroll work, including three-dimensional musical instruments and a Pantages “P” shield logo above the stage. Flame-shaped light bulbs originally surrounded the proscenium and the light sockets are still in place. The Pantages Theatre has been an important part of the fabric of Vancouver’s historic precinct for over 100 years.

Many famous vaudeville stars trod the boards at the Pantages when it was a Vaudeville house. In the late 1920s, it was converted to a movie house and has operated under several names during its lifetime, among them the Royal, State, Queen, Avon and City Nights. It most recently operated as a Chinese-language theatre until 1994.

In 1994 the Chinese-language theatre closed its doors and the Pantages has been sitting unused since that time. There have been various proposals to restore and reopen the Pantages Theatre; none of them have yet been successful. In recent years, the roof has leaked on the Pantages causing water ingress to the ceiling. Regular monitoring of the building is underway to prevent further damage.

In 2004, developer Marc Williams purchased the Pantages Theatre with plans to restore it. In 2005 The Pantages Theatre Arts Society was formed to help restore and manage the theatre in the public interest once it was restored. A restored Pantages would be home to three resident companies: City Opera of Vancouver, Vancouver Cantonese Theatre and Vancouver Moving Theatre. The plans called for the theatre to be seismically upgraded and the interior fully restored.

Heritage Vancouver’s Position
Heritage Vancouver urges the City of Vancouver to move quickly to purchase or find a purchaser for the Pantages Theatre, to build on the four years of groundwork and avoid losing the theatre to demolition or neglect. The Pantages has wonderful acoustics, and its restoration would fill a gap in live venues in Vancouver for a mid-size theatre.

Update December 29, 2011: The final bricks are being palleted of what was the oldest surviving Pantages theatre from the once large chain of theatres, and Canada’s oldest surviving purpose-built vaudeville theatre – Vancouver’s Pantages Theatre is no more.

Update May 9, 2009: Regrettably there is no good news to report on the Pantages Theatre. Last July the previous City Council turned down the current owner’s final proposal to restore the Pantages Theatre. In September, instead of purchasing the Theatre, Vancouver City Council agreed o conduct a feasibility study, which to date has not been started. The current Council has had no discussion with the owner and has shown no interest in reversing the previous council’s decision.

The sale of the Pantages is progressing and it is our understanding that the interested purchaser does not intend to retain the building. In the meantime the Theatre’s condition has deteriorated so rapidly it is now off limits to visitors. It appears that Vancouver will lose a 101-year old theatre, unique in all of western Canada.

Petition online to Save the Pantages [link has expired]
www.petitiononline.com/pantages

History of Vancouver – The Pantages in Vancouver
www.vancouverhistory.ca/archives_pantages.htm