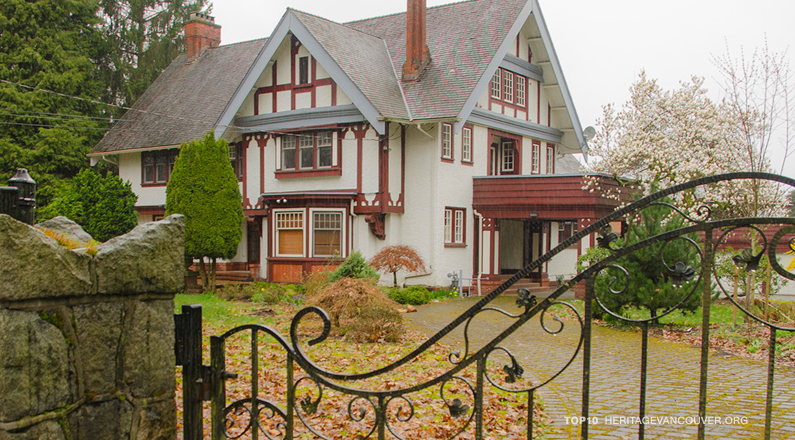 The Official Development Plan of 1982 is inadvertently turning this heritage character neighbourhood into an expensive subdivision of inflated faux heritage homes.

What is the threat to First Shaughnessy?
The heritage character of the First Shaughnessy area is rapidly being eroded, and it is turning into an expensive subdivision of inflated faux-heritage homes.

The rich patina that only well-maintained true character homes can achieve is being replaced by houses that don’t have the quality of workmanship, careful attention to detailing, or thoughtful selection of materials displayed by the original houses.

Unfortunately, First Shaughnessy is zoned as a heritage “character” area, not a heritage conservation area, and replicating the character of the area is currently considered good enough.

The Official Development Plan of 1982 has inadvertently led to the building of excessively large houses and the loss of character-defining estate landscaping. A 1994 ruling from the City’s legal department confirmed that any house with the exception of the handful of designated houses could be demolished.

Since 1982, 50 of First Shaughnessy’s existing 369 character homes have been lost, with the rate accelerating every year. While 72 houses in First Shaughnessy are listed on the Vancouver Heritage Register, 297 remain unlisted, and they are all targets for redevelopment. The Shaughnessy Architecture and Landscape Inventory, the earliest heritage assessment which pre-dates municipal and provincial heritage lists, has yet to be rolled into the City Register.
3537 Hudson Street is an authentic First Shaughnessy District pre-First World War heritage home with original interiors that is currently at peril.

Why is “First Shaughnessy” significant?
First Shaughnessy, the area between West 16th & King Edward, Arbutus & Oak, was originally developed by the CPR in 1907, and was designed as the city’s most exclusive residential enclave. It was an area of large lots where a building of $6,000 minimum value was required.
Pre-1940 houses and their lush landscaping with ninety-year old trees define this heritage character neighbourhood. First Shaughnessy contains an array of heritage buildings with distinct North American styles such as neo-Tudor, Federal Colonial, & Arts and Crafts.

History
The great Depression and two World Wars took their toll on First Shaughnessy, and by 1960 the city had legalized rooming houses in the neighbourhood, which was by then considered a blighted area.

In the 1970s, an attempt was made by the city to loosen up the restrictive single-family residential zoning, by allowing the development of McRae Mews, in which CD-1 spot-zoning allowed the construction of an assembly of townhouses on part of the Hycroft estate.
In addition to the concern over spot-zoning, Shaughnessy had another problem. Many of the large heritage houses were occupied by residents no longer able to keep up their properties. These houses, wonderfully unique to Vancouver, were suffering a slide into what would later become known as demolition by neglect.

To meet the pressures for densification and to encourage the retention of this prime heritage housing stock, an Official Development Plan was passed by the city in 1982.

In response to the social and economic climate, the plan encouraged the conversion of large houses into suites (each to be a minimum of 1,678 square feet, with a maximum of 4 suites per house), and the new construction of coach-house-like infills on properties over 23,000 square feet, providing that the landscaping, grandly referred to as the estate-like quality of First Shaughnessy, was retained.

A set of design guidelines that attempted to distill what was most important about First Shaughnessy was introduced, and a neighbourhood design panel appointed to oversee future development and to encourage good design.

Because the Official Development Plan provided First Shaughnessy with its own unique zoning, it was to be reviewed ‘from time to time’ in order to monitor the results. This review has yet to happen, and over time, changing market forces have resulted in centrally-located Shaughnessy’s desirable large lots becoming extremely attractive for development.

Although the pre-1940 character houses that define First Shaughnessy rarely exceed .32 Floor Space Ratio (FSR= built square footage / lot square footage) new homes are always maxed-out at .45 FSR, the result being that the landscaping that supports the park-like appeal is being eaten up.

In one case, an award winning 1970s Dan White house of 17,000 square feet was demolished to be replaced by a bloated faux-basilica style house of 23,000 square feet (until recently, the record holder for largest house in Vancouver).

The irony is that these new large homes do not retain their resale value, whereas well-maintained old homes such as the Hollies (1388 The Crescent, built in 1913) have always led the market in resale value.

Heritage Vancouver’s Position
Heritage Vancouver strongly supports the retention of this unique neighbourhood, with its estate-like heritage homes and landscapes and to that end urges the City of Vancouver to take the following measures:

Update Sept 12, 2009: The Nichol House project passed another hurdle when it was reviewed by the Development Permit Board on August 10th. The projects had been signed off by the Director of Planning, but was sent to the DP Board by Council to discuss the “form of development, and whether or not it was in conformance with the “prior-to” conditions. Although two days had been set aside for the hearings, there was not the turnout of angry neighbours that was expected. Of the 14 speakers, 7 were for and 7 were against. Most tellingly, the two adjacent neighbours on either side of the development were emphatically supportive and one took the opposing group to task for ignoring this “heritage salvation” by running an “amateurish political letter-writing campaign”. The form of the development was approved 9 to 1 so now it’s back to Council for what should be an automatic approval. The meeting finished with Brent Toderian addressing the meaning of “precedent ” to the neighbours. So with any luck this project will survive all the political interference that it has encountered over the last four years, and the very significant Nichol House and its Arts and Crafts garden setting will be fully preserved.