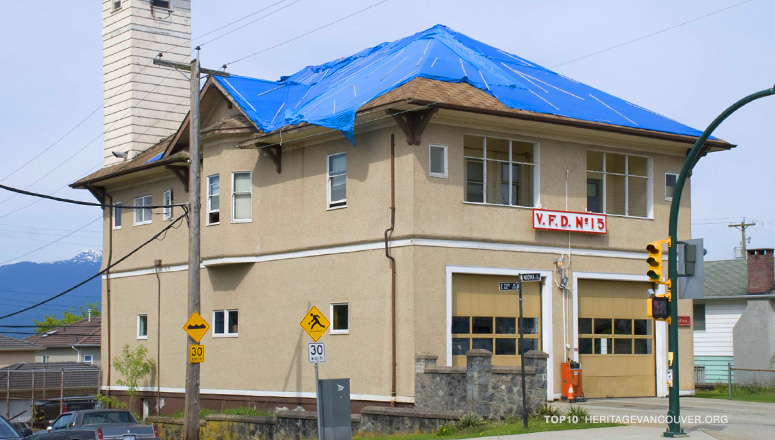 The lack of a design to restore rather than replicate the firehall threatens it with either demolition or the loss of its heritage value.

What is the threat to Firehall No.15?
Firehall No.15 is at risk of being either demolished to make way for a new three bay firehall or becoming a victim of demolition by neglect. The fire fighters have vacated the building, its roof is under a blue tarp and its condition is continuously deteriorating.

Heritage Vancouver applauds council’s decision of February 3, 2009 instructing staff to report back with a design for a new three-bay firehall incorporating historic Firehall #15, but it continues to be threatened until council approves a design that restores—rather than replicates—this heritage building.

Why is Firehall No.15 significant?
Although Collingwood-Renfrew is one of Vancouver’s oldest areas, little remains of its earliest settlement. Apart from the Carleton School site, only this firehall—one of two remaining Edwardian firehalls in the city—stands as a prominent historic marker in an area of mostly post-1940s houses. A local landmark, this handsome structure is much valued by the local community. Its location makes it visible six blocks in either direction.

Character-defining elements include the Edwardian massing and details; the shingled upper storey with its flared belt line; narrow lapped siding on the first floor and the 40 foot hose tower at the rear; the segmental arched porches over the multi-glazed fire doors; an interior with pressed tin ceilings and brass fire pole; and a low granite wall enclosing the site.

History
Constructed in 1913, Firehall No.15 underwent a typical 1950s renovation resulting in the stucco overcoat, the removal of the two projecting balconies/overhangs on the front elevation, combined with glazing of the upstairs porches and removal of the arches. Vertical tongue-and-groove planked walls remain in the porches; photographs from the early fifties document the attractive Edwardian exterior that could easily be restored.

In July 2006, a 10-to-1 vote was passed to preserve and restore Firehall No.15 on its original site. Council directed staff to staff report back on an updated final design that would include the retention of the firehall.

In March 2007 the staff report stated that the original building could not be incorporated into the design and recommended the construction of a replica tower. Council voted 6-to-5 in favour of accepting staff’s recommendation to demolish Firehall #15. Since a 2/3 majority is required to overturn a previous decision the vote failed to pass, leaving the building’s future in limbo.

After the March 2007 vote, the fire fighters vacated the building due to its unsafe condition.

On February 3, 2009, council passed a motion reaffirming the July 2006 council decision and “resolved that the present council reaffirm the retention of the existing Firehall #15 building on the current site at 3003 East 22nd Avenue for incorporation in a new fire facility; and that staff report back on updated final design and cost estimates for a replacement three-bay fire facility.”

Heritage Vancouver’s Position
Firehall No.15 must be retained as a neighbourhood landmark. In the same way that the Roundhouse provides a historic focus for Downtown South, and the Stanley Theatre anchors the South Granville Rise, this iconic structure reinforces the sense of neighbourhood in Renfrew-Collingwood. The local community recognizes the cultural significance of this building as well as the chance for the city to preserve the Edwardian era public buildings that served an outlying community and the role of the Fire Department in the growth of the city. Properly restored with all of its original elements and an authentic true colours exterior, this could become once again a great source of pride in this neighbourhood.

We urge the City to find a creative solution that preserves rather than replicates this important landmark. A previous proposal called for the building of a firewall between the old and the new firehalls with the heritage building used for offices, training and public spaces. A positive vote from council would show that a City that places great value on view corridors would continue to place equal emphasis on its public heritage structures.

Update May 9, 2009: Council has approved retention of one of Vancouver’s last Edwardian-era firehalls. Despite our support of this initiative, we wish to express grave concerns about the potential approach to this restoration as described in the Staff Report. The description of the exterior work indicates a serious disregard of Heritage Standards & Guidelines, specifically the destruction of exterior features and their replication through the application of a new rain screen façade. It is too early in the project to make sweeping decisions about the approach to restoration. We strongly suggest that before any decisions are made, that there be sufficient investigation of the condition of exterior materials, and that every effort be made to retain, rather than replace, the historic exterior fabric.

Update May 12, 2012: Success! After appearing on our Top 10 Endangered Sites list for five times over the last dozen years, starting in 2001, the grand old lady Firehall #15 has a full new lease on life, restored, looking better than original (if possible!), and incorporated into a new firehall. Its grand re-opening was held May 12, 2012, just shy of it’s 100th year birthday.