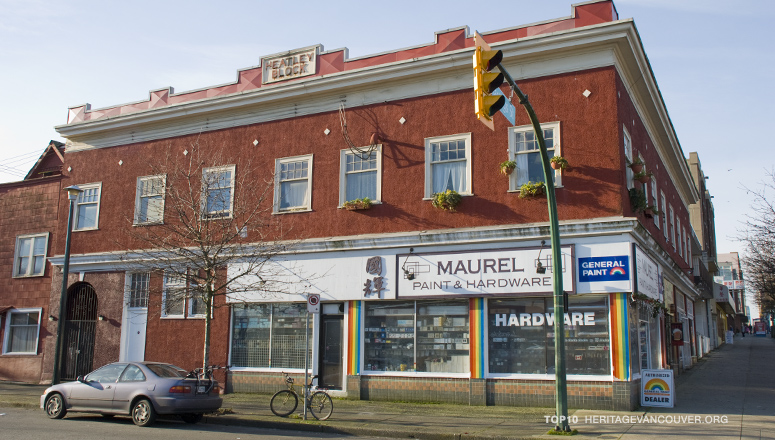 The City’s current plan to tear down this block to make way for a new library rather than following the community’s interests in locating the library in a wing of Strathcona School poses a threat to this successful historic model of mixed commercial use and affordable housing on Hastings Street.

What is the threat to the Heatley Block?
The Heatley Block was bought by the city’s real estate department with the expressed purpose of redeveloping the site for a new Downtown Eastside, Strathcona, and Chinatown branch of the Vancouver Public Library. This move was made despite the fact that Strathcona residents polled about the future location of a new Strathcona Library overwhelmingly stated that Library construction should not come at the expense of neighbourhood heritage and history. The Heatley Block and its two historic houses are not as yet on the City’s Heritage Registry.

Despite the potential to put the new library in a separate building of the Strathcona School, neither the city nor the library board has made a decision to do that. As long as the Heatley Block is considered a potential site for the library it is still under threat of demolition.

Why is the Heatley Block Significant?
The Heatley Block, a two-storey, wood-frame apartment and retail block located on the southwest corner of Heatley Avenue and East Hastings Street in historic Strathcona, was built in 1931 by Italian-born hotelier Samuel Plastino. This landmark building, with its period red and cream colour scheme, its distinctive cornices and rooftop crenellations, five retail entrances facing Hastings Street and arched apartment entry gate facing Heatley Avenue, is the last building of its kind on East Hastings.

Over the years, the second floor apartments have been home to a colourful and diverse spectrum of East End residents. It was the first Vancouver home for any number of new immigrant families arriving in Vancouver by boat and train, as well as the final abode of retired loggers, miners, longshoremen, shipyard and cannery workers.

The five retail spaces have been home to a broad range of vital and long-lived neighbourhood businesses ranging from fruit markets, butcher shops and confectioneries—even a burger bar, to dry cleaning outlets, a beauty parlour, a barber shop, a women’s clothing store, camera stores, real estate offices, and a popular tattoo parlour.

Unbeknownst to many is the fact that prior to the construction of the Heatley Block, the building’s site was the location of two wood framed dwellings, one built in 1889 and the other during the Klondyke Gold Rush in 1898. These two houses, which originally faced Hastings Street, were not demolished by Samuel Plastino but were moved to the back of their lots and reoriented to face Heatley Avenue.

The 1898 house, built by renowned mountaineer and CPR survey party guide William Cameron McCord, was home from 1900 to 1902 to New Brunswick-born Vancouver pioneer school teacher and principal Thomas A. McGarrigle, one of the first teachers of the West (later called Dawson) School at 935 Helmcken Street. From 1972 to 2000, Mr. Hon G. Lee, one of the founders and benefactors of the Lee Clan Benevolent Society, lived downstairs.

The Heatley Block is therefore unique in that it is a rare Vancouver architectural conglomeration that combines pioneer architecture (417 Heatley is one of the oldest houses remaining in Vancouver), a house from Vancouver’s Klondyke boom years, and the last remaining and still vital example of a wood framed combined retail/apartment block on this part of East Hastings. This, and its unique social history make it a significant property indeed.

History of the site
News that the Heatley block was being threatened with demolition caused a groundswell of opposition in the neighbourhood. The Heatley Block Preservation Society organized to prevent the demolition and gathered more than 7000 signatures on a petition asking the city to save the Heatley Block and locate the new East End Library in the 1921 Strathcona School Building on East Pender instead.

Since then, the Library Board and City representatives have met with the Heatley Block Preservation Society a number of times and agreed that research should be done to evaluate the historical merit of the buildings and a proper Statement of Significance has been written; this was subsequently completed by the firm of Birmingham & Wood. At it’s August, 2008 board meeting, the Library Board passed a motion to reexamine the Strathcona School as an option for the location of the new library. At approximately the same time, Strathcona School was selected by the Provincial Government as one of three schools to be part of a $30-million Neighbourhoods of Learning pilot project aimed at turning older schools into centres for both education and community services.

Since then, a group of Strathcona residents and business people have begun meeting to discuss working together to buy back the Heatley block from the city and turn it into an equity co-op. The group submitted a letter of interest to purchase to the city in February, 2009.

Heritage Vancouver’s Position
Heritage Vancouver recognizes the unique architectural heritage and social-historical value of this rare conglomeration. The Heatley Block must be preserved. It is not only a historic and vital link to Vancouver’s East End history, but also an important reminder of the type of business strip that once flourished on East Hastings and could flourish again if the Heatley Block’s future was assured and it was used as a model for future heritage-friendly redevelopment.

Heritage Vancouver urges the Vancouver Library Board to consider the Strathcona School alternative for the new East End Library, which is now much more feasible since the BC Government has chosen Strathcona School for its Neighbourhoods of Learning project. This will not only save The Heatley Block and its two historic houses, along with the important low income housing and vital retail model it already provides, but will save a landmark Vancouver school building in dire need of protection and preservation. Everyone wins in this scenario.

List of Owners of the Heatley Block Property from Crown to Present (PDF, 697k)
HV_Heatley_Block_ownership.pdf