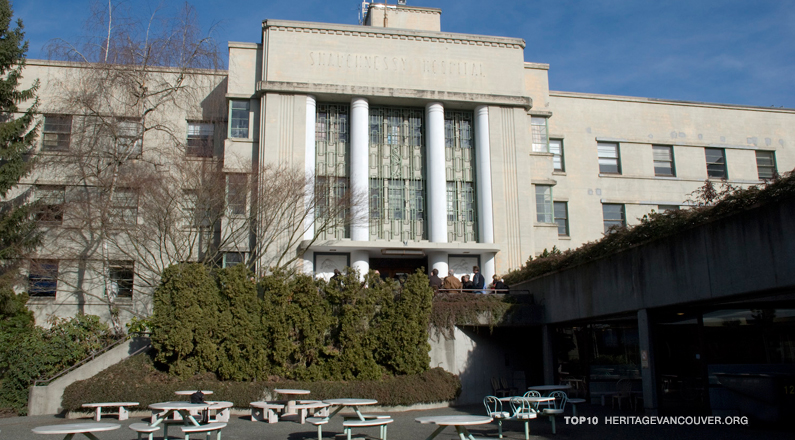 Provincial Health has no plans to retain the significant heritage elements of the Shaughnessy Hospital within the context of new planned development.

What is the threat to Shaughnessy Hospital?

The entire Oak Street campus is now the site of a planned comprehensive redevelopment project designed to reshape and restructure the hospitals and streamline health services. The redevelopment strategies do not take heritage into account, and representatives of the hospital have stated that the Shaughnessy Hospital building has no heritage value.

The Shaughnessy Building is under immediate threat, as the L wing and the northern part of the A wing are scheduled for demolition in the near future. The hospital has already begun relocating people who worked in these areas. According to the new master plan for the BC Women’s and Children’s Hospital campus, the entire Shaughnessy Building will eventually be demolished to create space for new buildings.

Why is Shaughnessy Hospital significant?

The Shaughnessy Hospital building, located at 4500 Oak Street, was built in 1940 for the Department of National Defence.

Also known as Shaughnessy Military Hospital, it served as an important point of care for servicemen injured in the line of duty, and functioned as a residence for many veterans as well as a workplace for nurses, doctors, and other medical professionals.

The hospital was also the site of a royal visit in 1951 by Princess Elizabeth and Philip, the Duke of Edinburgh.

Of particular interest are two relief panels by the Canadian artist Beatrice Lennie framing the former main entrance of the hospital. The panel to the left of the doors depicts a nurse helping an injured soldier, while the panel to the right of the doors shows a doctor holding a wounded serviceman. These significant artworks are an integral part of the sophisticated, Streamline Moderne façade of the hospital.

The building is also a very significant example of reinforced concrete construction, with concrete used as the cladding as well as the structure.

With the demolition of St. Vincent’s Hospital, and the impending loss of the remaining Streamline Modern building at the Vancouver General Hospital, this may be our last opportunity to preserve a significant example of a wartime hospital in Vancouver.

History
The City of Vancouver changed the zoning of the hospital property to CD-1 in 1977; since this time, several amendments have further changed the details of permitted construction.

The veterans’ hospital was closed in 1992, after which the buildings were integrated into the Oak Street campus of BC Children’s Hospital and BC Women’s Hospital & Health Centre, run by the Provincial Health Services Authority. Referred to as the Shaughnessy Building, this structure houses a variety of health-care related functions, including many offices for administrative workers.

A 1996 City of Vancouver administrative report to the Standing Committee on Planning and Environment indicates that staff sought council support to list the Shaughnessy Hospital main building on the Vancouver Heritage Register, after having already postponed this in 1994 because hospital staff had asked for additional time to investigate possibilities for restoring the buildings in question. At this time, city staff supported the inclusion of the building on the register.

A 1999 policy report to city council, talking about a previous master plan for the hospital site, noted that the plan had the support of city heritage staff precisely because it did not endanger heritage buildings. This report specifically referred to blocks A and B of the Shaughnessy Hospital as heritage structures, as they are listed on the Recent Landmarks Inventory and the interiors were assessed as part of the 1996 Heritage Interiors Inventory.

Shaughnessy Hospital should not be demolished.

It has an important place in Vancouver’s history and in the memory of many Canadians. Its preservation would highlight and honour the significant contributions of countless veterans involved in Canadian military operations. Retaining this historic building would also serve as an important reminder of the significant changes in health and social services that have taken place in BC during the 20th century.

Heritage Vancouver encourages the Provincial Health Services Authority and the City of Vancouver to investigate the significant value of retaining the Shaughnessy Hospital building, an important and singular piece of Vancouver’s 20th century history, before finalizing the master plan for redeveloping the site.

As has already occurred on this site, we urge a creative exploration of ways to retain the significant heritage elements of the Shaughnessy Hospital within the context of new development.

Update August 6, 2014: The current plan is to partially demolish the Shaughnessy Hospital and integrate the remaining elements into Women’s hospital. Heritage Vancouver has been given reassurance that the entrance with the spectacular WW1 memorial Beatrice Lenny friezes will not be affected. The Pavilion next door was restored in 2004 and the name was changed from the Jean Matheson Pavilion to the Mental Health Pavilion. Heritage Vancouver plans to request that the name be restored in memory of this famous WW1 nurse. We will continue to monitor the development to ensure the friezes survive and Jean’s name is restored.