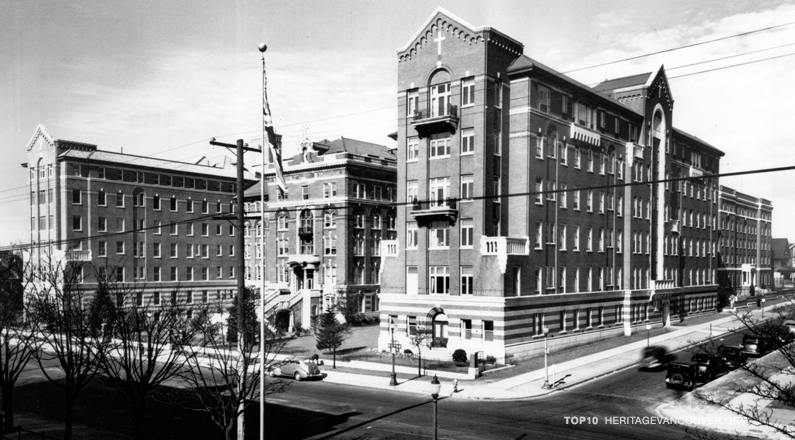 On April 13, 2015 the Province of BC and Providence Health Care announced plans to move St. Paul’s Hospital from its historic Burrard Street location to a new health care campus on Station Street. The existing site would be sold for residential and commercial development in order to generate a major part of the $1 billion-plus budget for the new facilities.

This jeopardizes the future of the historic Burrard Building. This landmark structure is comprised of the Centre Block – the oldest surviving section of St. Paul’s Hospital – built in 1912-1913, and the North and South Wings that were completed in the 1931 & 1939 in a consistent Second Renaissance Revival style.

What is the threat to St. Paul’s Hospital Burrard Building?

There are no laws or policies, or incentives, which compel the maintenance of institutional heritage. It is a common tactic to stop maintenance on existing public buildings when a new building is desired. We need only look at our historic schools to see this ongoing lack of maintenance, or the bark mulch plaza at the Vancouver Art Gallery. It is hard to make the case for a new building unless you find fault with the old one, leading to systemic deterioration.

Heritage Vancouver documented the threat to this historic building in our 2006, 2007, 2012 and 2013 Top Ten lists. The age, condition and arrangement of buildings at St. Paul’s create ongoing challenges to the delivery of modern health care.

Over the years, renewal options explored construction of a new hospital on Station Street; redevelopment at the existing Burrard Street location; and alternatives that included elements of both concepts. The decision appears to have shifted back to the idea of a Station Street campus.

In the rush to attempt to maximize revenue-generating development on the existing site, the Burrard Building risks being sacrificed. The excuse given is the need for extensive seismic upgrading of the historic building.

However, detailed engineering studies have proven the feasibility of seismic upgrading as part of the adaptive reuse of the Burrard Building for office and support services. Therefore, this historic building could be adapted to these purposes or possibly to unique residential uses, as part of the future development on the existing site.

What is the significance of the Burrard Building?

1894
The original St. Paul’s Hospital was a 25-bed, 4-storey wood frame building designed and constructed by Mother Joseph of the Sacred Heart. An accomplished carpenter and the first woman architect of the Pacific Northwest, Mother Joseph was responsible for more than 30 hospitals, schools and homes for those in need. The Sisters of Providence had acquired the St. Paul’s site, then a piece of wilderness on Burrard Street, for health care purposes. The Hospital cost $28,000 and opened in 1894, just eight years after incorporation of the fledgling City of Vancouver. In the years that followed, the Sisters would build twelve more buildings on the site.

1912
In the Edwardian-era boom of 1912 the original building was demolished to make way for a new reinforced concrete structure finished in the Second Renaissance Revival style with brick, terra cotta and granite. Now known as the Centre Block of the Burrard Building, the cross-shaped floor plan accommodated 200 patients and cost $400,000. The architect was German-born Robert F. Tegen, who had worked in architectural offices in New York and other eastern cities before moving to Portland. Tegen’s earlier work for the American Sisters of Providence made him a natural choice to design the new Vancouver facility. The terra cotta came from Gladding, McBean & Company of Lincoln, California.

1931–1939
In 1931, the north wing was added, followed by the south wing in 1939. Both were designed by architects Gardiner & Mercer, and demonstrate remarkable consistency with the design of the original building. Construction photos show the robust concrete construction of the historic buildings.

St. Paul’s Hospital holds heritage significance as a landmark for health care in Vancouver. Founded by Mother Marie Fredric and the Sisters of Providence at the request of Bishop Paul Durieu, for whom the Hospital is named, it has been in continuous operation at this site since 1894.

St. Paul’s Hospital is listed on the Vancouver Heritage Register in category “A” but is not a designated heritage building and is not protected by legal statute.

Heritage Vancouver supports the commitment by Providence Health Care and the Province for an extensive public process to determine the future of the existing St. Paul’s site.

During the recent studies for the hospital’s future, the potential loss of St. Paul’s from its historic location has been of great concern to many, and community groups such as “Save St. Paul’s Hospital” were formed to keep the hospital in the West End. The new public process may lead to some health-care and/or community uses remaining on site and these might be accommodated in the Burrard Building.

Therefore Heritage Vancouver urges that the maintenance, retention, seismic upgrading and restoration of the historic Burrard Building be included in the planning process for the future use of the existing St. Paul’s site.

Updated will be posted on the future of very significant site.

August 12, 2020:
The St. Paul’s Hospital site on Burrard Street in Downtown Vancouver has been sold for nearly $1 billion to developer Concord Pacific. What the future holds for the historic Burrard Building is unknown, even more so because of a potential issue of two view cones intersecting over the whole site, and the only apparently area where the cones don’t intersect, is over the Burrard Building – where the height could apparently be placed.