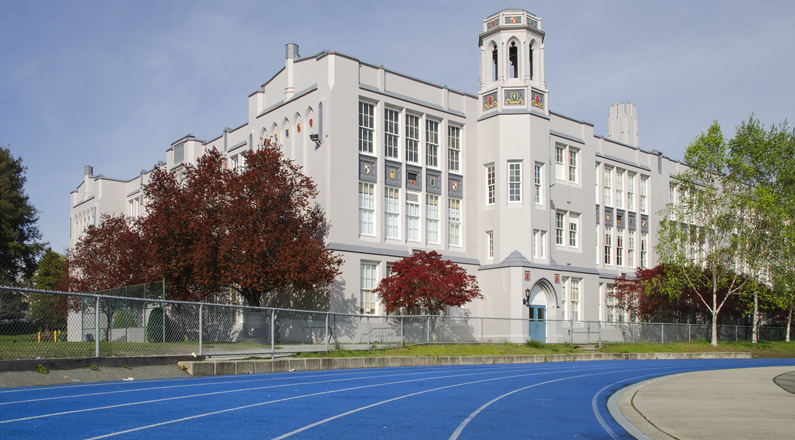 Point Grey Secondary School is an important and impressive historical landmark in the Kerrisdale community. Built in 1929, it is one of Vancouver’s oldest, prominent and significant high schools.

PGSS is of important heritage value for its role in the community and its beautiful Collegiate Gothic architectural style – uncommon among Vancouver schools. It is currently threatened by the Vancouver School Board’s approach to the seismic mitigation program. Many other heritage schools in Vancouver have already been lost, and it is time to stem the tide.

Although seismic upgrading is required, this can be accomplished without the loss of this valuable community landmark.

The immediate threat to our heritage schools is the provincial seismic mitigation program and the way it is being implemented by the Vancouver School Board.

The Ministry of Education has recognized the need to address the seismic upgrading of public schools since the late 1980s. As of August 2012, 143 seismic upgrade projects across British Columbia had been completed or were under construction. However, only 21 of Vancouver’s 108 schools have been seismically renewed. According to the Ministry of Education, all of the high-risk schools that have not yet received attention are located in Vancouver.

Most other communities have managed to seismically upgrade their schools without resorting to widespread demolition to provide a safe school environment. The lack of adequate funding is the main reason the Vancouver School board gives for not being able to retain all their heritage schools during the seismic mitigation process.

The cost of seismically upgrading the schools is inflated because for years the Vancouver School Board has deferred maintenance on these schools; it has also stripped architectural features instead of repairing them, postponed updates, and created makeshift additions. The School Board also claims that old schools are inadequate and outdated for today’s educational needs. As a result, existing heritage facilities are abandoned to pave the way for replacement schools.

A lack of creative thinking, and the absence of documentation on the heritage values of the existing schools, are the real reasons for the condemnation of these historic buildings. Architects can achieve the rejuvenation of school buildings, but they are often consulted after decisions are made to replace a school. Instead of defaulting to demolition, the VSB should seek out creative solutions to upgrade heritage buildings, or where that is not possible, to retain the most significant portions of existing buildings.

Unless there is a major change in the VSB’s approach to the seismic mitigation program, any high-risk school that has not yet been upgraded is now threatened with demolition.

Point Grey Secondary School is one of the most distinctive heritage high schools in Vancouver. The architects Townley & Matheson, better known for designing Vancouver City Hall, chose a traditional style but an advanced form of poured concrete construction.

The main building work began in 1928 and concluded on March 30, 1929. The school was officially opened on September 27 (one month before the 1929 stock market crash). PGSS has had a central role within the community since its inception. Its birth coincided with the beginning of a period of unprecedented want and poverty in Canada and the Western world, and it opened its doors to students a month before the “Black Tuesday” stock market crash of 1929 that started the Great Depression.

Its early years were marked by deprivations. Teachers did not always receive their salaries, as the School Board had limited money; students were asked to ration their use of paper and other items to help cut the costs of running the school. Employment opportunities for graduates were dismal, with the majority expecting to remain unemployed for up to two years after graduation.

But PGSS was also part of an important historical development for Vancouver. Like South Vancouver, Point Grey was a unique municipality separate from Vancouver until January 1, 1929, when the districts amalgamated (total population 240,000), forming the City of Vancouver that we know today.

The architectural style of PGSS is Collegiate Gothic, an uncommon style in Vancouver. The Collegiate Gothic style was inspired by medieval Gothic architecture. It was a leading building style in the 19th century, and was favoured for academic, political, and religious structures, characterized by pointed arches, buttresses (external supports projecting from the face of a wall), recessed entrances, decorative medallions, stone carvings, parapets and tall, narrow windows. PGSS also has a stunning interior.

The main entry, on the west facade, leads to a staircase in an entry vestibule, above which is a rough-hewn wood-beamed ceiling with Gothic-inspired metal lanterns. This leads up to the main floor, also with beams and lanterns, supported on cast plaster corbels.

Four caricatured faces are repeated three times – a happy boy, the same boy with a look of anguish, a girl applying powder from a compact, and an elderly academic with glasses and a pipe, holding a stick of chalk.

On axis with the main entry a pair of double doors lead to the spectacular auditorium. This double-height space has a highly decorated proscenium, with projecting Gothic motifs. Along each side wall are four bays of triple-assembly double-hung windows, filled with coloured leaded glass, that open onto the hallways on the main and second floors.

Heritage Vancouver believes that the main building of Point Grey Secondary School should be maintained and upgraded.

We strongly encourage the Vancouver School Board to: