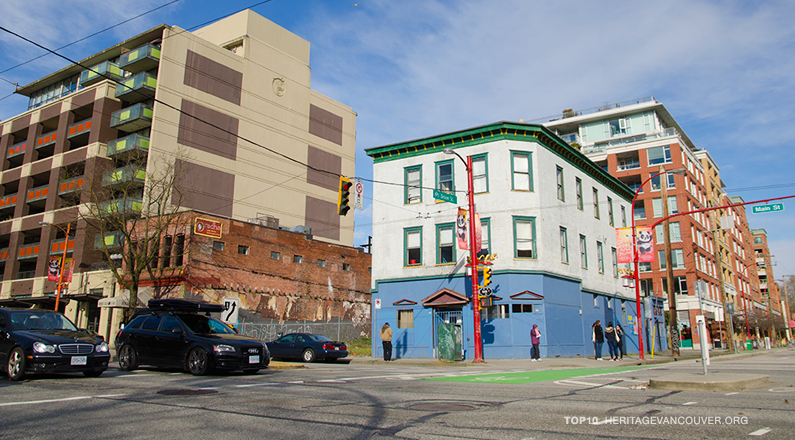 A proposed large development at 728-796 Main Street at Union Street – including the Brickhouse, Creekside and Jimi Hendrix Shrine buildings – is an in-strea

Chinatown has been on our list for the past two years and its heritage character remains extremely threatened. The area is increasingly at risk of losing its unique character and special cultural/social life due to ongoing development pressures.

Imminent changes in the areas surrounding Chinatown may also pose significant challenges. The removal of the viaducts and the relocation of St. Paul’s Hospital would fuel new development that could irreversibly impact the neighbourhood’s identity.

One significant threat to the heritage of Chinatown actually comes from the misunderstanding of heritage itself.

Narrow definitions of heritage – the more traditional ideas around preservation of materials and buildings of historic importance and/or architectural significance – have dominated debates surrounding Chinatown’s heritage and planning guidelines. This has led to planning policies and property development that view satisfying design rules as sufficient for the retention of “heritage.” This focus on built heritage has unfolded to the detriment of the area’s unique cultural heritage.

The current understanding and approach that heritage conservation is also about the management of change in communities is not reflected in planning and policies, and fails to be an adequate part of public discourse. A holistic approach to heritage conservation reflects both the tangible and the intangible, and in Chinatown’s case includes: community and cultural activities; a diverse mix of affordable and special needs housing for an aging, low-income population; demographic-specific businesses; and opportunities to experience Chinatown’s culture and heritage in daily urban life.

It is imperative that this understanding of cultural heritage be translated into a management strategy with appropriate policy tools so that any development materially recognizes and enhances this cultural context. With the increasing threats to the vulnerable cultural and social fabric of Chinatown, Vancouver is at risk of losing a key part of its irreplaceable heritage.

Chinatown continues to be an area of high interest for development. The strongly opposed 105 Keefer Street development was voted down first by City Council at the rezoning public hearing in June last year and then by the Development Permit Board in November. This proposed new building has come to symbolize the debate on what is an appropriate development for Chinatown.

Further south, a proposed large development at 728-796 Main Street – including the Brickhouse, Creekside and Jimi Hendrix Shrine buildings – is an in-stream development application. The applicant has expressed their dedication to heritage and their intention to continue the historic façade pattern and materials; interpretation panels will be installed in commemoration of the black community that once existed in Hogan’s Alley.

239 Keefer Street, former site of the much-missed Chinatown Supermarket, will make way for a lantern-inspired condo building. The applicant notes, “a design language has been developed that looks to the existing architectural stock and fabric of Chinatown, incorporating precedents of materiality and existing design language without being merely derivative.”

Although they make attempts to respond to the heritage context, these developments largely fail to go beyond some notion of what makes a building look like it fits into Chinatown. The default interpretation of respecting heritage by maintaining an aesthetic appearance is a fundamental problem. These developments do little or nothing to materially support the special characteristics of the area as understood by many in the community and as identified in the Chinatown Plan.

Most of the new housing will not be affordable, and this will lead to socio-economic change in Chinatown that will quickly force out the low-income residents of the neighbourhood. Places where community members feel welcome are already dwindling, and demographic-specific businesses are unable to remain due to increased rent and demolitions.

City of Vancouver staff recently proposed changes to Chinatown development policies such as rescinding rezonings and limiting storefront width, and there may be merits to the proposed changes. However, the question of how contemporary development and changes in the neighbourhood can respond to the Chinatown context – aside from aesthetic appearance – remains. More policy tools are necessary to lead applications to understand and respond to the Chinatown context. This was a major issue surrounding opposition to the 105 Keefer rezoning public hearing and the development permit board hearing.

The North East False Creek Plan recently approved by council as well as development of the new Saint Paul’s Hospital complex adjacent to Chinatown will introduce large scale impacts that will most likely increase cost of living for existing communities, as housing and retail meant for wealthier demographics continue to overtake the existing lower-income communities. If these impacts are not addressed, Chinatown’s cultural landscape, which sustains a variety of communities, will continue to be compromised.

Chinatown is divided into two Historic Area Districts. The HA-1 district stretching from Gore to Taylor along Pender Street was formally recognized as a National Historic Site (NHS) in 2011. There are 33 heritage buildings in the HA-1/NHS with distinctive architecture that blends Chinese regional and western styles and has special features (e.g. recessed balconies, mezzanines and interior courtyards).

Chinatown outside the NHS is the HA-1A district, and includes the concentration of Benevolent Society buildings that served as community support centres for the establishment of Chinatown.

It is important to recognize Chinatown as a whole (HA-1/NHS and HA-1A) as an urban cultural landscape. The entire area is nationally significant for its association with the struggles of Chinese Canadians throughout their longstanding settlement in Canada.

Early Vancouver was a major port of entry for Chinese immigrants who settled in Chinatown, and created one of the first communities in our city. Many were labourers, but others were entrepreneurs, and they established Chinatown as an ethnic shopping district. However, due to racism that Chinese-Canadians faced prior to World War II, Chinatown began as a self-contained enclave with a theatre, schools, a hospital and clan associations. In the postwar era, as discriminatory immigration policies were lifted, there was a great increase in Chinese immigration, and Vancouver’s Chinatown grew to become one of the largest in North America.

This area provided a backdrop for the struggle to establish a community in the late 19th century, the fight for voting rights and citizenship starting in 1923, the battle against freeway construction and urban renewal in the 1960s and 70s, and the fight against a ban on BBQ meats. Over time Chinatown has become a symbol of resilience, diversity, struggle and perseverance. To this day, it is a neighbourhood with a very strong sense of place linked to its unique history, intact cultural fabric and active community.

Chinatown is presently home to large numbers of low-income residents and seniors who are mostly Chinese-Canadian. It is a relatively affordable neighbourhood with much rental housing, and acts as a hub for social, cultural and community activities with major public spaces, e.g. Dr. Sun Yat Sen Classical Chinese Garden.

Established residents in Chinatown are reliant on the area’s shops and services. As more local ‘mom and pop’ shops are closing for a variety of reasons, people are finding it more difficult to buy food and access services, which are culturally specific to them. People living in other Downtown Eastside areas also rely on the affordability of Chinatown shops to meet daily needs.

Many Vancouverites feel that the social and cultural diversity of Chinatown is important to retain for the collective identity and well being of our city. In the words of UNESCO: “…cultural diversity is as necessary for humankind as biodiversity is for nature. In this sense, it is the common heritage of humanity and should be recognized and affirmed for the benefit of present and future generations.”

The City of Vancouver officially apologized for historical discrimination against Chinese Canadians on April 22, 2018. In the Historical Discrimination report to council in October of 2017, a number of recommendations – one of which is the pursuit of UNESCO World Heritage Designation – were made to address the future. Chinatown’s significance grows with this effort of reconciliation, community building and equity.

Chinatown is an important neighbourhood that reflects Vancouver’s history and heritage through continual interactions between culture and place in day-to-day life. New infill is occurring rapidly and it is critical that changes to the area be managed in ways that respect the cultural and physical characteristics of the area.

Chinatown has been the focus of significant City of Vancouver planning efforts, and most, if not all, of these initiatives recognize that both the neighbourhood’s physical and intangible qualities are important and in need of protection:

“We know buildings are just one part of Chinatown’s character… [We must] Develop a more culturally-centred approach to community building in Chinatown, recognizing the unique character and needs of the neighbourhood.” (from Chinatown Development Policy Changes – progress update from staff to community, March 2018).

To this end, we believe that the City should apply a values-based conservation approach to Chinatown, and: 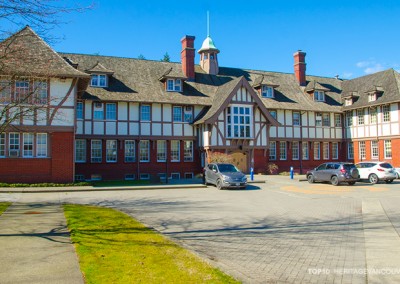