North Strathcona, including Powell Street, lies on the unceded territories of the Squamish, Musqueam and Tseil-Waututh First Nations, and was built upon ancient Salish sites along the south shore of the Burrard Inlet. In 1858, the land was declared Crown land, and European logging camp was created in this area, which later became the Hastings Saw Mill in 1867.

The Powell Street community was built around the Hastings Mill and the other waterfront industries that developed in the area, a vibrant Japanese neighbourhood formed, centered around today’s Oppenheimer Park. Powell Street became an animated mixed-use area, where Japanese-Canadians lived, worked and owned businesses alongside Yugoslav-, Scandinavian-, and Afro-Canadians.

Heritage Vancouver’s September 2015 tour and talk discussed the diversity of North Strathcona as “Vancouver’s first neighbourhood”, the pre-1942 vitality of Powell Street, the post internment community and the current issues shaping the future of this historic area. 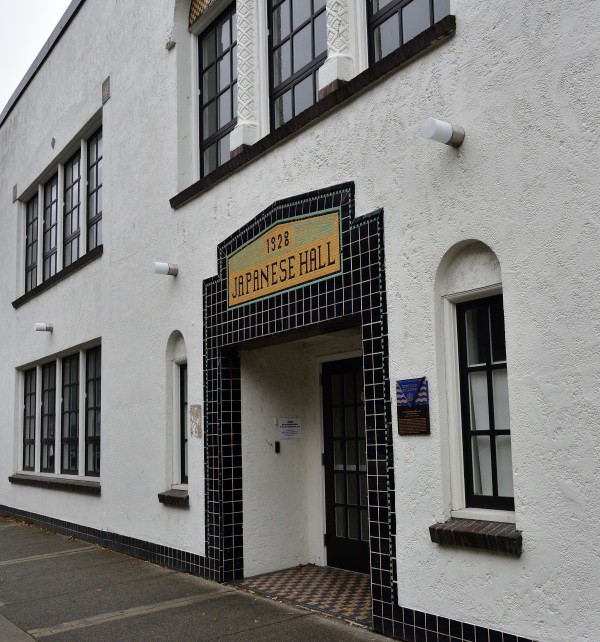 Helen Cain, facilitated this tour and talk. Helen is a former Heritage Vancouver Board director, Past-President of Heritage BC and is a community, heritage and development planner. She was a consultant to the Japantown Historical and Cultural Review and is currently the heritage planner in Policy Planning at the City of Richmond.

Industry and the beginnings of Powell Street (Paueru Gai)

The Powell Street area is Vancouver’s earliest neighbourhood, where Vancouver’s oldest buildings and stories are found. Prior to British colonization, the land was in the territory of the Squamish, Musqueam and Tseil-Waututh First Nations who had seasonal sites along the south shore of the Burrard Inlet. Within 30 years the First Nations were shut out of the area and continually dislocated as newcomers established the port town, destroying ancient Salish fishing and gathering sites in the process. The area formed around the European logging camp, later becoming the Hastings Mill, leading to the establishment of the Gastown, Railtown, Powell Street and Strathcona neighbourhoods. These neighbourhoods served the shipping, canning, textile, fishing and lumber industries found along the waterfront.

As wealthier white residents moved and resided in the wealthier West End, Japanese Canadians began to immigrate to the area, referring to it as “Poweru Gai” (Powell Street). Asian immigration was strictly regulated by the Canadian Government, as European Canadians feared they would overwhelm the population. Initially, only Japanese men were allowed to immigrate for employment and typically had to accept lower wages for their work. Residents of Powell Street regularly faced anti-Asian racism, and the exclusion of Japanese Canadians from most Vancouver neighbourhoods led to the concentrated Powell Street community. Powell Street and the 300-700 blocks of Cordova East became the centre of the Japanese community with mixed use streets that allowed for small family businesses, stores and rooming houses. By 1921 most of Vancouver’s Chinese and Japanese population worked within walking distance of Powell Street. Within Powell Street was an ethically-diverse population, First Nations worked with Japanese-Canadians and other immigrants, Yugoslav-, Scandinavian- and Afro-Canadians also lived in the area. 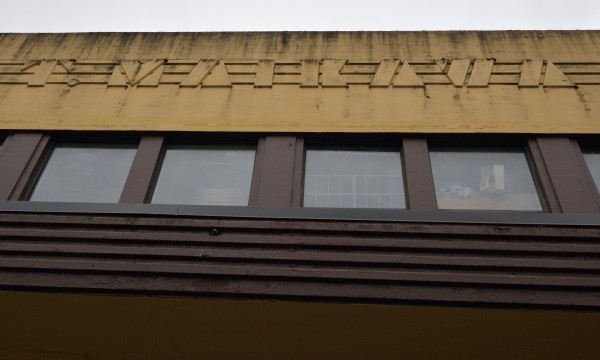 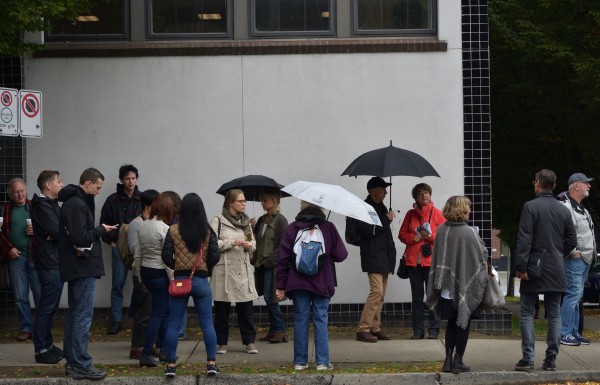 Powell Street thrived as a bustling commercial and residential neighbourhood that housed churches, schools, department stores, baseball teams and community halls. It has always been a culturally diverse neighbourhood; Japanese-Canadians lived, worked and owned businesses alongside Yugoslav-, Scandinavian-, and Afro-Canadians. The Japanese presence in this community was evident in building signage, but the architecture was less indicative of the population, as many Japanese Canadians sought to integrate themselves into Canadian culture.

Powell Street developed a tradition of providing housing for people in an affordable manner. It became a comfortable residential living space for the middle and working class. Many Japanese families ran businesses and boarding houses along the front streets while living in laneway homes. Along with accommodation, the Powell Street proprietors would provide meals and job recommendations for their tenants. Stanley Rooms, York Rooms and Keefer Rooms were a few of the single room occupancy buildings built within Powell Street. The New World Hotel at 390 Powell was a significant rooming house on Powell Street. Built for Japanese immigrant Shinkichi Tamura, its name and architecture was more reflective of North American culture and demonstrated the community’s desire to integrate. These organized boarding and rooming house businesses along Powell Street, housed the single male industry workers in the area.

In response to the single worker population, bars and pubs developed in Gastown and brothels emerged in the 1890s within walking distance of the Hastings Mill on Dupont (later Powell) Street. Following city raids in 1907 the brothels were shut down. They then moved to nearby Canton Alley and Shanghai Alley in Chinatown. Following more raids, the madams moved to the 500 and 600 blocks of Alexander Street. Remarkable for the era, many of these buildings and businesses were owned by women. A unique handful of these 1911-12 buildings exist today but are threatened by development pressure. 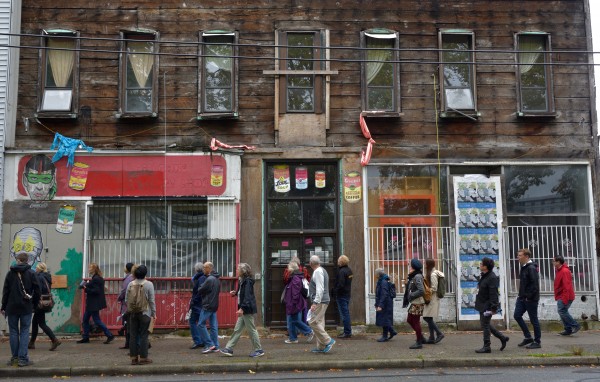 The Sisters of Atonment Mission (255 Dunlevey) ran the Catholic Japanese Mission School which ran language programs, provided day care, a health clinic and adult convert classes to the Japanese community. It is one of the oldest surviving buildings in Vancouver. The Vancouver Japanese Language School began as a school teaching a general Canadian curriculum but evolved to become a Japanese language school and community hall. The Uchida Building (439 Powell) hosted the Ming Sun Benevolent Society, an organization that provided a place for the Japanese community to share and discuss ideas.

Powell Street Grounds (now Oppenheimer Park) was the social centre of Powell Street. It became the working man and woman’s place in the city, providing a space to congregate, protest and socialize. It was home to the Asahi baseball team who were a source of pride for Japanese Canadians. The team became well known for their tactical gameplay, playing “brainball” and won multiple league titles. Following the Japanese Canadian internment, the team disbanded in 1942. The Asahi were inducted to the Canadian Baseball Hall of fame in 2003. 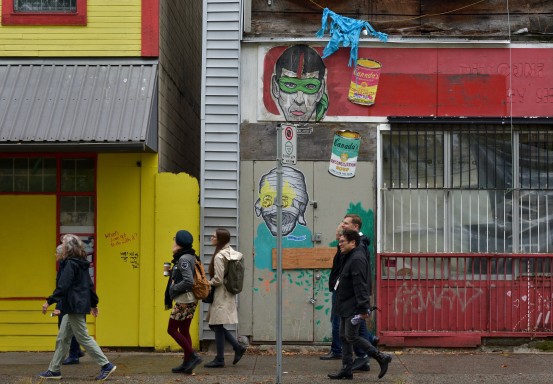 In early 1942, following Canada’s declaration of war on Japan, Japanese Canadians living in British Columbia, the majority Canadian citizens by birth, were detained and dispossessed. The Canadian Government responded aggressively to the growing xenophobia towards Japanese Canadians following the attacks on Pearl Harbour and Hong Kong. Japanese-owned fishing boats were detained and all Japanese property that was not able to be carried was confiscated by the Canadian Government. The RCMP began to systematically remove and relocate the Japanese Canadian residents of Powell Street. The entire Powell Street community was displaced and moved to internment camps in interior BC. The Canadian Government expropriated or sold all Japanese-owned property during the war, using the Japanese Hall as an administration building for the Canadian Army and the Fuji Chop Suey restaurant as a Federal Government administration building. The vibrant Powell Street neighbourhood seemed to disappear. 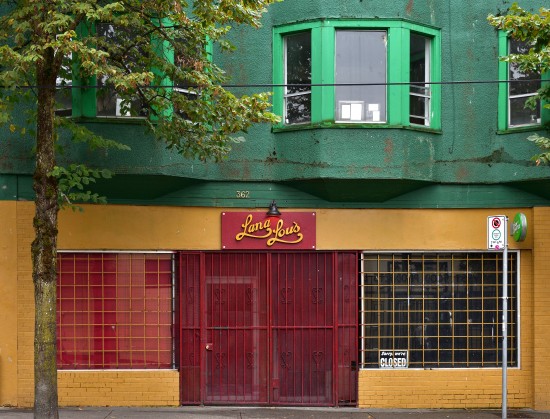 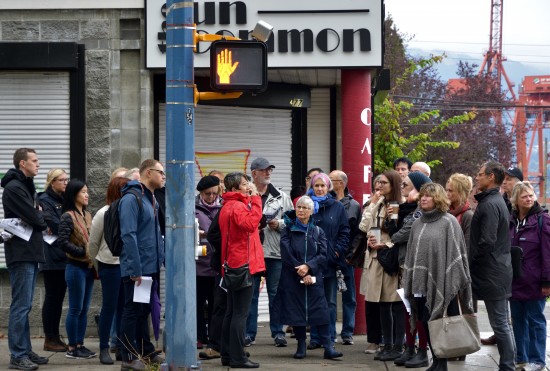 Powell Street’s history is unique, this cultural region demonstrates the effects of discrimination, indifference and injustice. It’s handful of historic sites are indicative of the neighbourhood’s growth, and later dismantling that occurred over the last century. Though several sites within Powell Street have received heritage designation, the City of Vancouver has yet to designate the area as a Historic Area, leaving many heritage sites at risk. Persistent community effort in the 1970’s advocated for and preserved the history of this neighbourhood. The work of Tonari Gumi in the Japanese Canadian Volunteers Association, the renovations of the Japanese Language Hall and Buddhist Temple and the creation of the annual Powell Street Festival were all a part of Powell Street’s cultural recovery.

It is again the collective action of dedicated residents that are working to increase social and affordable housing, improve welfare rates and zoning changes to restore the area’s thriving streetscape. The efforts to save the Uchida Building, the DTES Heart of the City Festival, and Oppenheimer Park programming demonstrate the residents’ hard work in this community. Powell Street continues to be a vibrant, culturally-rich community. Its residents are ethnically and economically diverse, including seniors, children, people on disability, artists, and families. 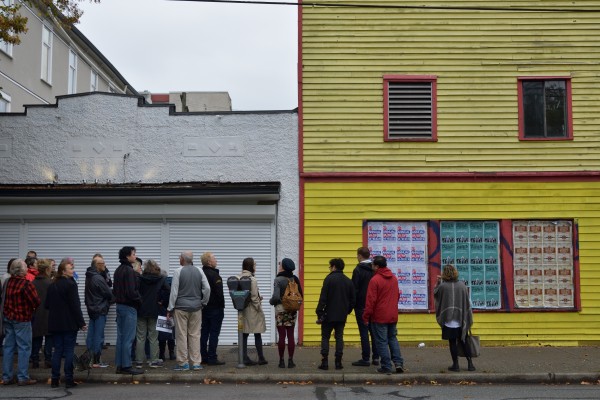