What’s So Special About ‘The Drive’?
The second talk of Shaping Vancouver 2016 series – What’s so special about “The Drive” dealt with the mounting pressure for development on Commercial Drive and its surrounding neighbourhood. This area is renowned for its diversity and vibrant street culture, and the aim of this conversation was to discuss how future development could impact this identity. 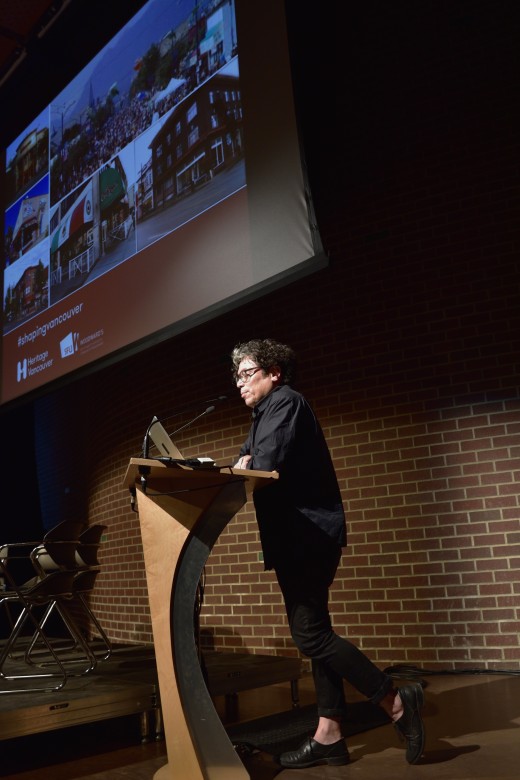 Susanne Dahlin Vice President of Britannia Board of Management, Chair of the Planning and Development committee. Theo Lamb Principal of Cicada Community Consulting and Board Director with Vancity and the BC Cooperative Association. Jak King Neighbourhood activist and historian. Tim Ankenman Founder and principal of Ankenman Marchand Architects. Dorothy Barkley Chair of Grandview Woodland Area Council, founding member of the Coalition of Vancouver Neighbourhoods.
Moderator Javier Campos started the evening by having the panelists stating what they believe makes The Drive what it is today. Qualities such as The Drive’s walkability, its historical architecture and the diverse selection of locally owned stores were suggested as defining traits of this neighbourhood. All members of the panel made reference to the exceptional community engagement of the residents of Commercial Drive, and noted that this engagement is what creates the welcoming and inclusive community found there.

The need for affordable housing alongside increased densification.

Panelists emphasized that Commercial Drive’s vibrant social culture is created by its diverse residents. This diversity has been possible because of affordable housing options in a city that is increasingly characterized as unaffordable. Panelists agreed that there is an undeniable need for increased densification in the Commercial Drive area, but also stressed that future developments must allow for diverse tenants – restoration and renovation of existing dwellings was suggested as a sustainable strategy that could increase density while still conserving the existing architectural heritage. The three story walk-up buildings found west of The Drive were discussed as possible sites of such renovation; however, it was noted that it may be difficult to provide an incentive significant enough to inspire a landowner to develop in this way. Imposing further rent regulations was also proposed as a way to combat unaffordability. This prompted a discussion on the importance of not allowing quick financial gains to be the largest influence on development, and the essential input of the residents. 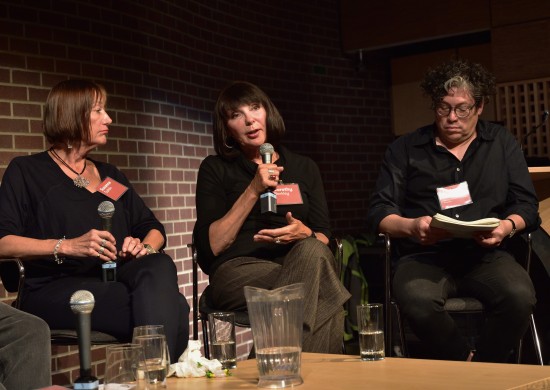 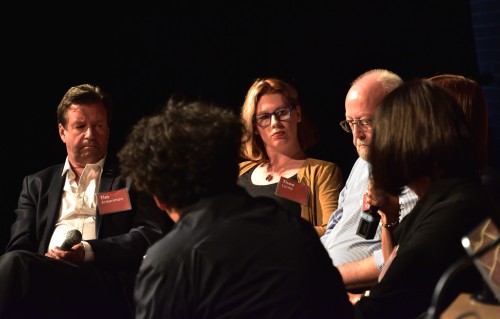 The need for gentle densification

Jak King noted that a history of slow development is what has characterized The Drive and fast paced developments will ultimately harm the character that has been established. Further, King mentioned that as a community, the Commercial Drive area is already fairly dense, and we should be investigating how we can utilize these spaces better, rather than build up to accommodate more. Javier Campos offered the discussion point that residents may need to be more critical of their own spatial needs, to create realistic expectations of their neighbourhoods. Panelists warned that increasing the density of buildings directly on Commercial Drive would hurt the walkability of this neighbourhood, as the shorter buildings create an informal and welcoming atmosphere that characterizes The Drive. Tim Ankenman suggested that it will be important to establish clear development policies to any community plans as unclear parameters could lead to rapid neighbourhood changes. A documented vision will allow for slow, incremental changes towards a defined goal.

The need for community input and guidance on development

All panelists strongly agreed that the values and needs of the people already living in The Drive need to be discussed, and felt that there has yet to be an opportunity for residents to be a part of any discussion. Furthermore, there was agreement that a broader vision for the future Commercial Drive be discussed before establishing specifics, such as building heights, as such details should follow from the overall vision. Taking inventory of the composition of Commercial Drive and the residential areas around it could provide insight to new developments on what comprises a resilient community. Panelists agreed that an in-residence urban planner would ensure that the community’s voice was heard. Dorothy Barkley noted that an in-residence planner would be an individual who knows the community and greater understands its needs. Jak King added that such a position had existed previously on The Drive, allowing people to come forward with ideas and the planner ensuring workability of these ideas. 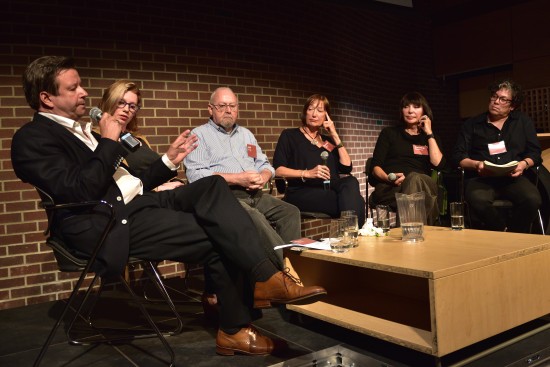 The importance of maintaining history to ensure livability on The Drive

Preserving the significant historical architecture along The Drive and the design of existing buildings providing guidance for future development was a focus of all panelists – Panelists suggested that the smaller size of storefronts found along The Drive allows for an eclectic collection of businesses which encourages pedestrian traffic. Panelists discouraged developments that would take up entire blocks, as these developments could negatively impact the walkability of these areas. Panelists also discussed the intangible heritage of The Drive: how it influences the atmosphere of Commercial Drive today, and why it represents the traits most at risk when developing. Campos suggested that The Drive has always been similar to a living room, an informal and welcoming space, where people can gather and socialize. This quality has allowed people to live in smaller dwellings as they also live within their extended community spaces. Panelists warned that developing high-end condominiums with no regard to this intangible heritage could lead to resident isolation and destroy this community history. The sense of space that residents of The Drive feel is well demonstrated in the usage of public parks. Panelists noted that while in some areas of the city, parks and public spaces go unused, The Drive could actually be described as park deficient. The success of these public spaces has been largely attributed by the panelists to the immersive community culture that has been established over time on The Drive. 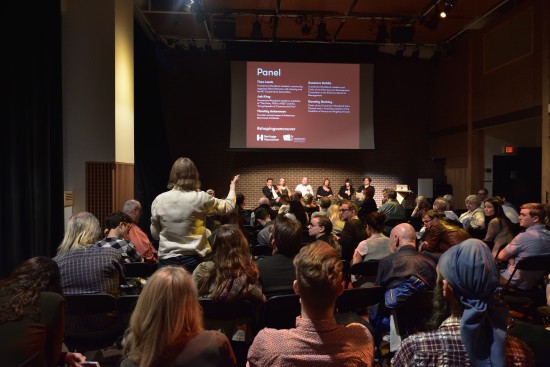 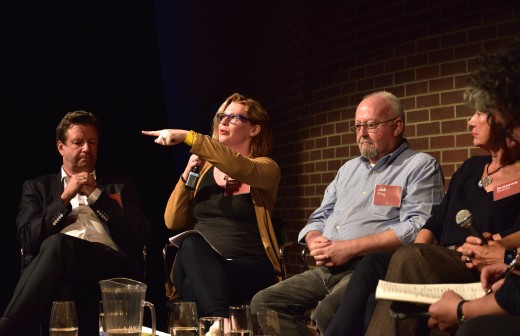 Questions from the audience

The recent development at Commercial and Victoria Division (Porter Rental Apartments) provides rental units to 1000+ residents, and successfully created a sociable atmosphere. Many residents are frequent users of nearby Trout Lake (Vancouver’s 2nd largest green space), and this proximity has contributed to the building’s success. Should we be pairing green spaces with increased density developments?

All panelists thoroughly agreed with this idea, but stressed that the needs of the community should be assessed to ensure that the parks can be developed to address these concerns fully.

Why would it be a bad thing to build a large condominium tower at Commercial-Broadway?

Tim Ankenman agreed that building high density housing at Commercial-Broadway is a viable option.  Ankenman continued that as this intersection is already a heavy traffic area, increasing its density is unlikely to harm the overall atmosphere of The Drive. Dorothy Barkley added that she believes there will be towers proposed at Commercial-Broadway in the coming neighbourhood plan, though she stressed the necessity of extensive planning at this busy intersection will only become busier.

More and more renters are facing evictions, and then are faced with the difficult challenge of finding an alternative rental space. As a neighbourhood, we are losing diversity. How can we maintain our diversity?

Theo Lamb noted that this is an issue that is felt across the city. Javier Campos suggested that neighbourhoods need to ask what guidelines should be implemented to maintain diversity when creating neighbourhood vision plans. Jak King noted that there are several buildings on The Drive that have evicted their tenants in the last six months but are currently sitting vacant.

In regard to the three story walk-ups found west of The Drive, landowners are currently only able to have one penthouse suite on the top floor to house the landowner; by allowing landowners to have full capacity of the fourth story it could increase the buildings density by up to 30%. Could this be applied around The Drive?

Panelists agreed that this could provide a fairly simple way to increase the density on this area, but noted the pressure many landowners feel knowing they stand to gain more financially from developing these buildings into large scale condominium towers.

Commercial Drive has enough density to accommodate the coming residents, and there are many examples of gentle densification already occurring, why is the neighbourhood facing such extremes amount of pressure to develop more?

Dorothy Barkley noted that the city hopes to increase The Drive’s density in the next five years but explained that she believes this accommodates more resident spaces than are actually in demand. Jak King agreed, reiterating that the development should happen in increments, rather than develop large areas all at once. Javier Campos questioned why there has not been much discussion on developing along Nanaimo Street, which could alleviate the pressure to develop on streets closer to The Drive. Tim Ankenman responded neighbourhoods surrounding Commercial Drive such as Kingsway and Boundary Road have already begun to develop. Ankenman suggested that we need to accept that an increase in density on Commercial Drive is coming, and focus on discussing the right way to implement it.

As a community, we are nervous and insecure about what change could mean to the neighbourhood ‘vibe’. What have other cities done when facing development?

Tim Ankenman noted that Vancouver is an exception when it comes to large cities in Canada, as it did not evolve around an existing subway/train system like others did. Heavy transit was developed in Vancouver after neighbourhoods were established, eastern cities did not experience the same transitional challenges as Vancouver.

How do the panelists envision buildings on the Drive? Change may be inevitable but maybe we should be dispelling the idea that everyone needs to live in very close proximity to The Drive, this would allow us to accommodate for more.

Tim Ankenman suggested that each building should be approached individually, as The Drive’s eccentricity is what has contributed to this neighborhood’s distinctive atmosphere. He stressed the importance of using creativity with each development.

This audience member posed that it is not a fear of change that the neighbourhood is experiencing but rather an impact on the walkability of this neighbourhood. She noted that having close access to green spaces as well as having shorter buildings plays a key role in the sociability and connectedness found in this community. She suggested that a tower at Commercial-Broadway would create a more isolating pedestrian experience and lead to development moving further north down The Drive.

Panelists responded that there would be aspects of the community that would be lost with the implementation of high-rises, but that if building these are necessary, designing them with community in mind is imperative. Using co-housing models that encourage socializing through communal kitchen and offices could maintain community.

There is significant architectural history found on The Drive – shouldn’t we be advocating for heritage components of Commercial Drive?

Javier Campos explained that while saving historically significant architecture is important, it is equally important to discuss the new design that will be implemented as well. If we do not carefully plan for future development alongside these buildings, we will be left with several isolated historical buildings but a culturally damaged community. These discussions need to encompass a broader view of Commercial Drive’s history in order to preserve it.

It is important that whole block developments are not permitted on The Drive - smaller storefronts allow for diverse businesses and deter big box stores that residents of The Drive are opposed to.

Panelists strongly agreed with this audience member, mentioning that this would be the ideal for Commercial Drive, but also noted that creating policy to enforce this has been difficult so far.