The Pacific Heights Housing Co-operative is a community on the edge of downtown off Pacific St. and Burrard made up of a seven-story apartment building and eight rehabilitated heritage homes. We learn from Theresa, a longtime Pacific Heights resident and member of the Board of Directors, about the benefits and challenges of co-op housing as well as her life in the West End as a long time member in the community.

All images were taken by Ben Geisberg, unless otherwise specified. 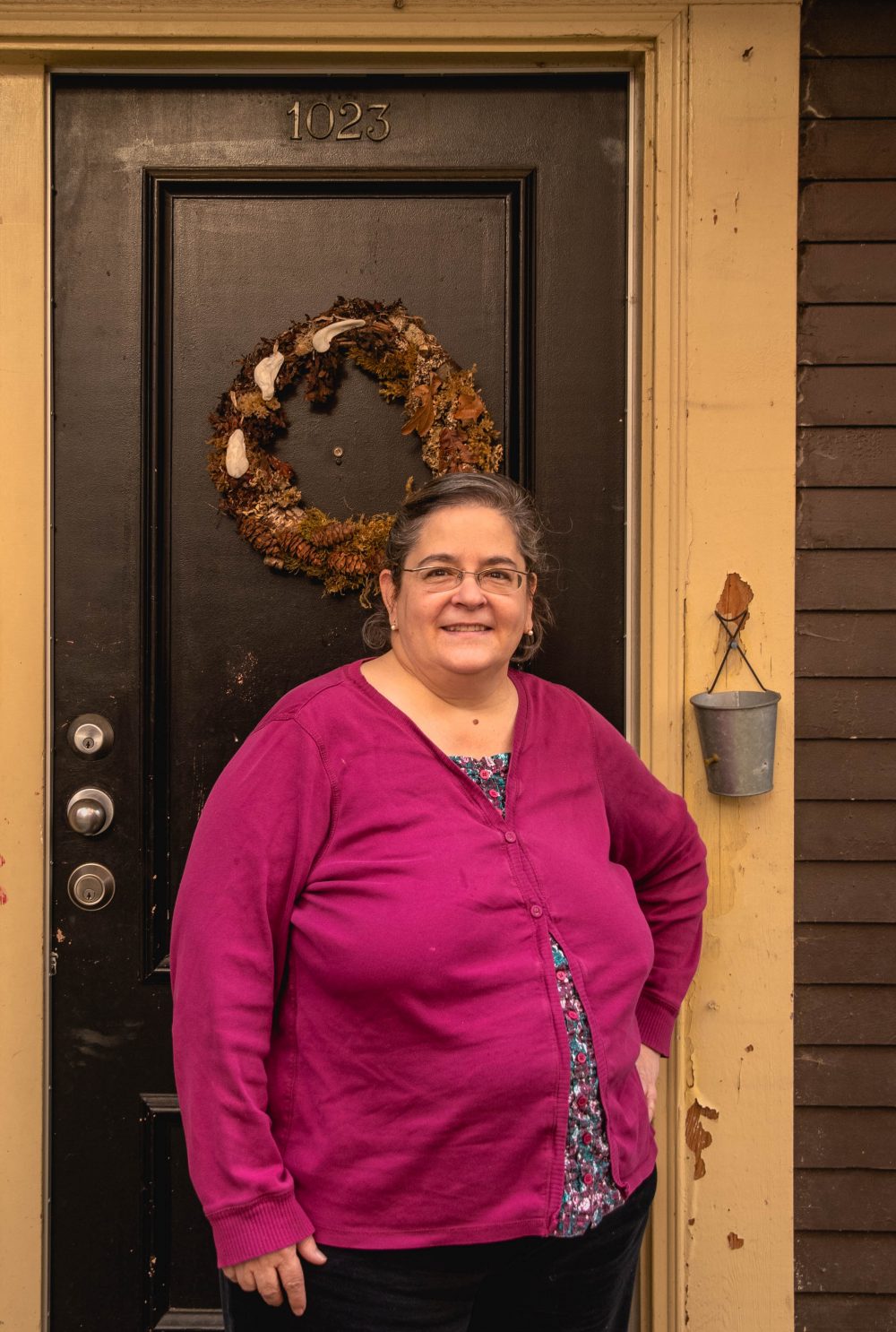 What are the disadvantages of living in a co-op? 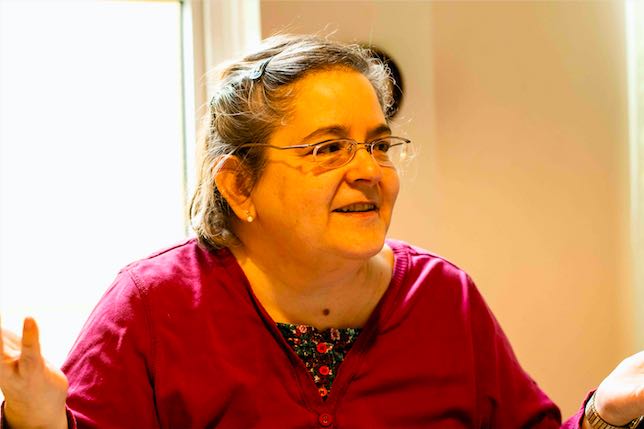 You have to have a patience for frustration, you have to be able to deal with people you don’t get along with and not get so frustrated that you say I just want to leave, because it’s too frustrating. Because you often have disagreements, you have policies that get instituted that may not fit with how you would want things to be run. But after 25 years of living here I realized the best way to make things work is to be more copasetic about the whole thing and realize that life isn’t just about getting your own way or things going perfectly. There are people who have lived here but moved out because they say it’s too much politics. So, if you don’t have a stomach for those things, it might get frustrating. I don’t let things get to me in the way that they did. I try to avoid the mentality of us vs. them.

How often do people in this co-op get together?

We’ll have a general meeting once a month except in December and August or something like that. There are also a few well-established social get-togethers. We had our annual Christmas party. Sometime in June, we have what we call a garage sale out in the courtyard. It’s about the social aspect of the garage sale rather than selling and making money. What’s happened is that I buy someone else’s books and they would buy my toys so it was like we’re paying each other to move stuff from one person’s house to the other. We also have a barbeque that’s a fundraiser for the social committee. We started having tea up in the common room for just the adults since so many of our events have kids in them. It’s just tea on a Sunday afternoon to help bring the seniors who don’t get out much, to meet people and talk and discuss what the issues are and what can be done about them.

Where do these ideas come from?

It’s a common component of co-ops to have a social committee. Ours has regular get-togethers and plans out what to do for coming months. From my perspective a social committee is what keeps a place going because you can get too caught up in meetings, how are we going to fix the roof etc. That helps with the cohesiveness of any group that has to work together. If you get too caught up in the business of what you are there to do, the humanity can get lost.

What in the West End is important for your life here?

The West End is a very walkable community. It really does feel like a small town. When we didn’t have a car I realized that my life was circumscribed by this very small geographical area. When I walk in the West End there are so many people I know, and so I feel like I am part of the greater community and not a co-op in isolation. I get to know the shopkeepers and that’s like my store, that’s somebody that I know. The family that used to own West Valley Produce, when they left, it felt like a very big hole in the community. There will be an impact with St. Paul’s Hospital. There are a lot of people who live here, who work at St. Paul’s Hospital and lots of people who are ill that go there quite frequently and, when that’s gone, that feels like it’ll change the feeling of the community significantly. 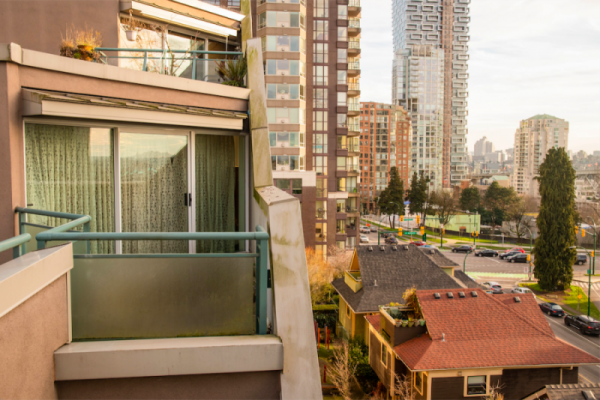 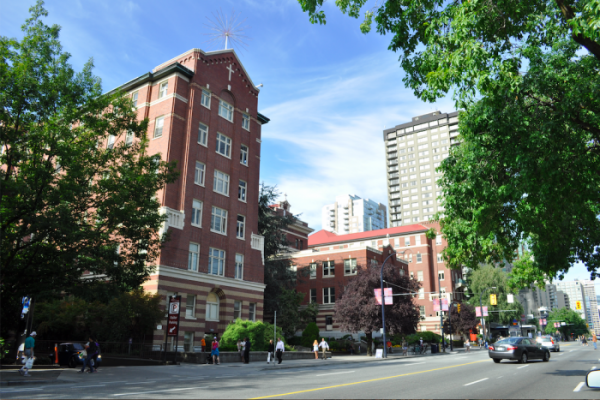 We walk by it all the time and it really feels, psychologically, like the hub of the West End. I see the people in their scrubs coming down Thurlow to Davie to patronize the businesses and that’ll just be gone. And I don’t know what’s going to happen to the buildings with medical offices, if they’re going to have to move or stay there. I don’t think people understand the depth of the impact that that will have.

Is there a place in the co-op that stands out for you?

It was a neighbourhood small grants project. It’s the Pacific Heights little free library but it feels like its a part of the community. I want to be able to have a place where I can put books in and know they’ll go to someone who wants to read them. And, in fact, there’s Joseph who is a panhandler who lives nearby and sits under a tree and he says “I smoke salmon not crack.” I’ve seen him here quite a few times and I’ve talked to him quite a few times about what he likes to read. So it feels like something for the community. A little boy came up to me and said, “What if homeless people take all the books?” I said “That would be wonderful, I would be so happy if they took books.” Imagine if you were homeless, you can’t even get a library card. 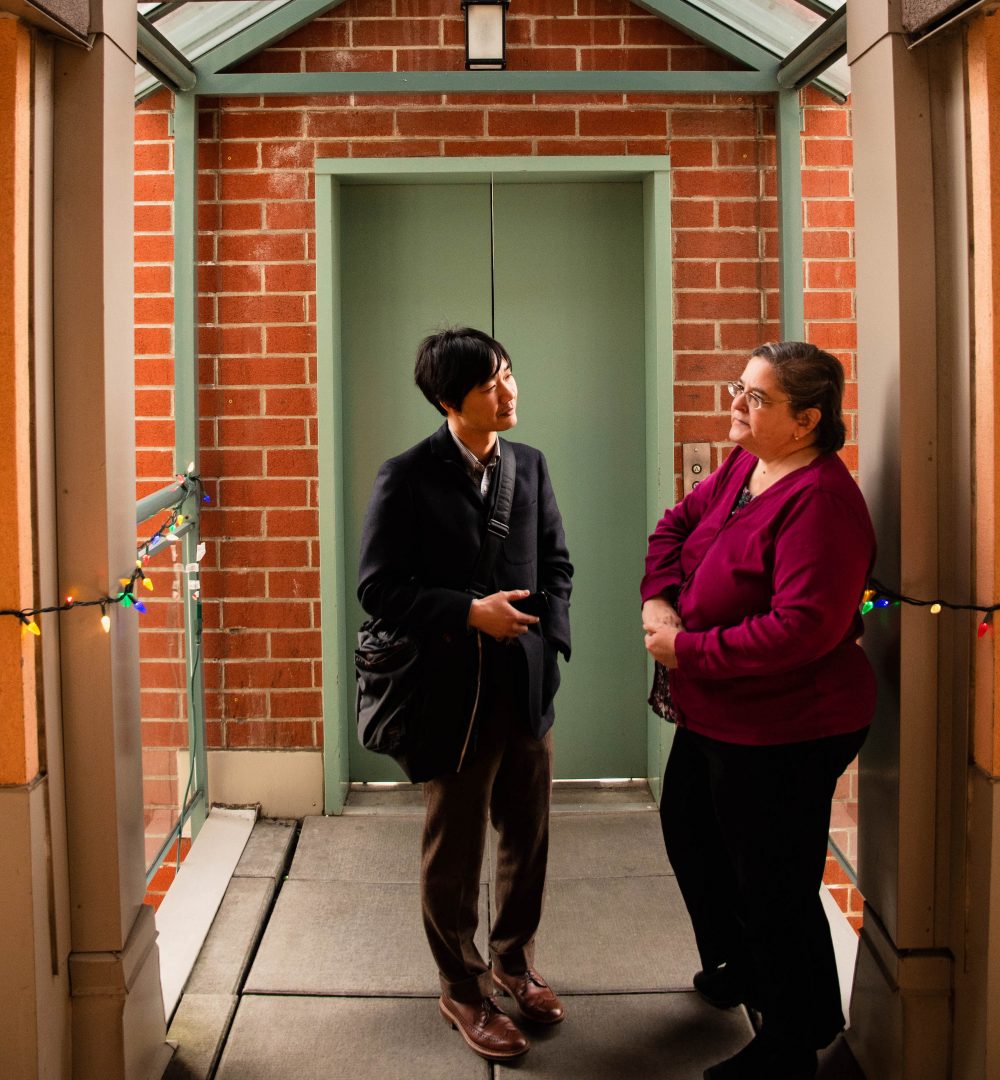 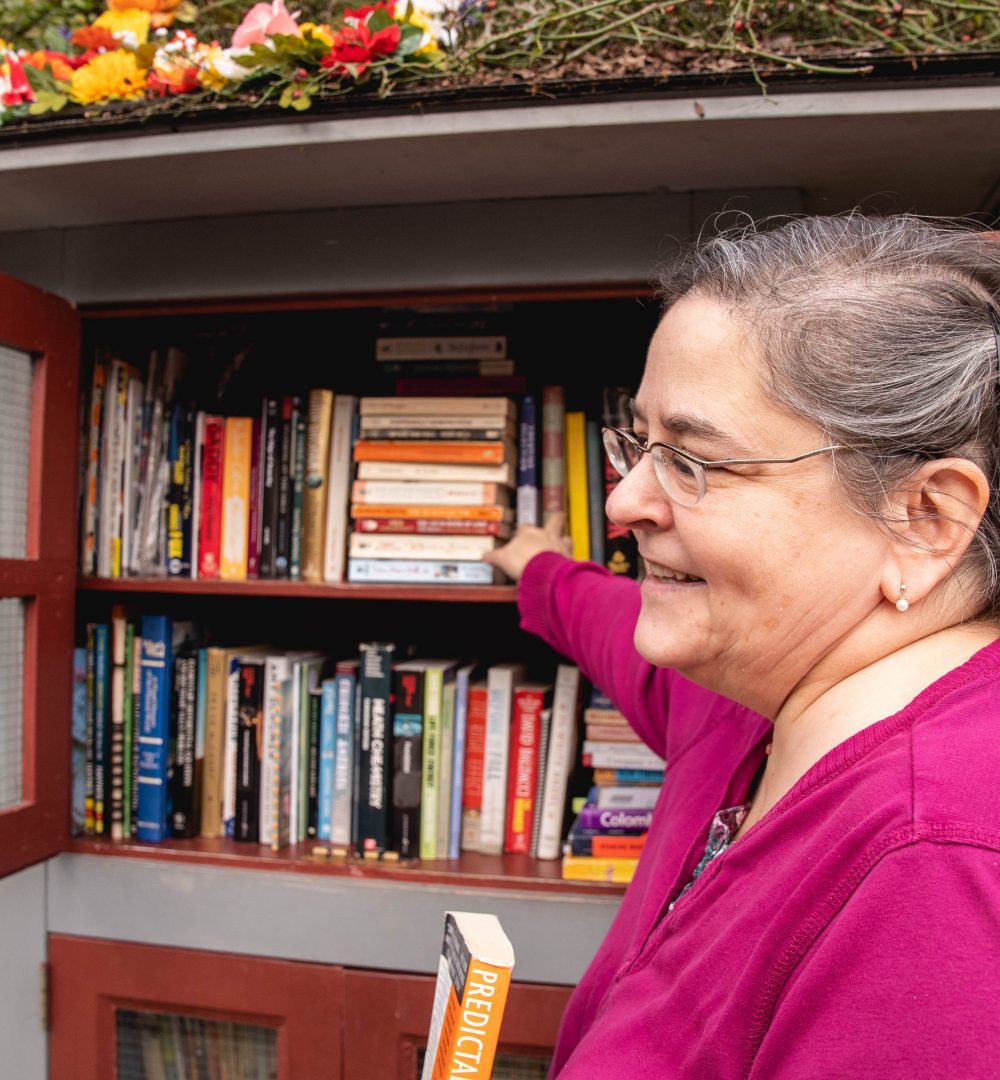 What has living in a co-op enabled you to do?

Well, it has enabled me to raise my kids in the same place without fear of having to move or that lack of security. It’s the feeling of being part of something you have some control over. In rental situations, there’s the landlord and he makes decisions. There’s that helplessness, what if that place gets sold? Here, the co-op makes the decisions because each unit owns 1/91th of the co-op. It’s not owned, it’s not rent, it’s a share. It’s non-equity so when you move out you aren’t making any money. Some people like having more control and some like to be part of something where they make decisions that make sense. Not everybody is left-leaning, not everybody has the same thoughts about how they want to do things but it is a democracy and we talk together and we decide what we want to do.

What are some of the values of co-ops?

A lot of it has to do with caring for one another and caring and being good stewards, not just for ourselves but for others around the co-op. The co-op model is not about profit. Our mission statement is to provide housing for a diverse, caring community in the heart of Vancouver. There are a lot of values: involvement, diversity, equality, democracy (which is very important to the co-op movement), accountability, compassion, respect, fairness, environmental awareness, safety. 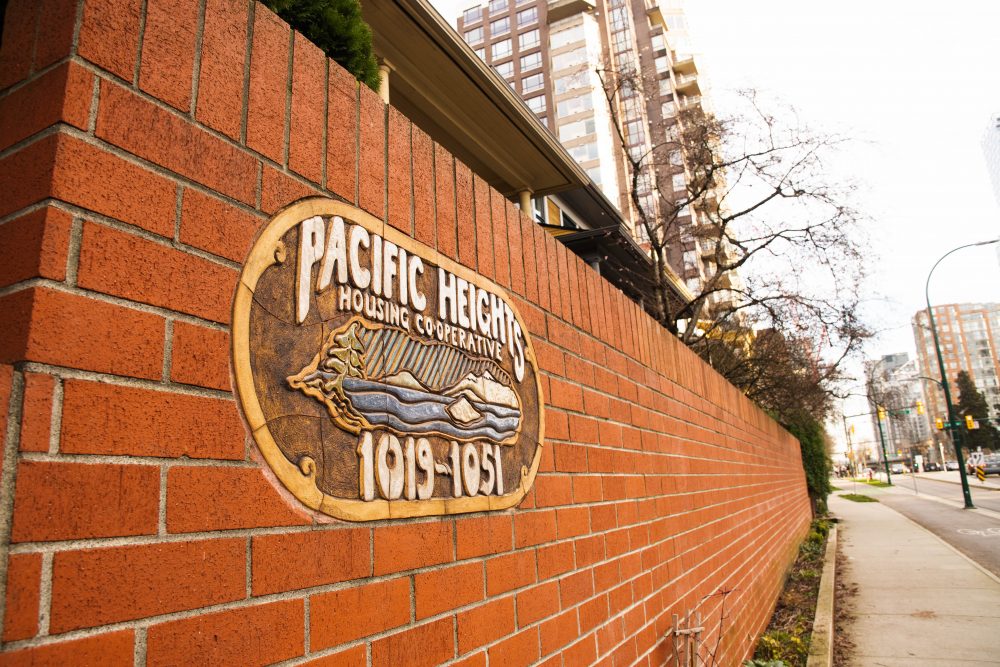 Do you feel like people associate with those values? Are they coming to you like well we just want affordable housing but those look good too?

When we’re interviewing new members, it’s like interviewing somebody for employment. It’s an art to screen somebody during an interview in such a way that you get to the core of what they believe. They can talk up the values but not believe in them.. Currently we’re getting a subsidy from CMHC to cover members who can’t pay the full housing charge. This subsidy ends in 2020. If we raise the housing charge, somebody who receives the subsidy will not have to pay more because they are paying 32% of their income. So if their income doesn’t go up, no matter how high the housing charge goes up, they’ll still pay the same. So, we would ask people how they would feel if their housing charge had to go up to cover the subsidy for people who can’t afford to live here. It’s a very socialist concept. That’s part of what the design of co-op is. There are some people who can pay this much and some people who can pay this much. And we all live together and are all equal. It’s not because you can pay more that you have more value than someone who pays less.

We also have something called overhousing, which will happen to us once our daughter moves out. We will be overhoused since there will be two people in a three bedroom unit. The expectation, and we know it, is that we will move into a two bedroom unit. It’s not fair that someone who is making more money can stay with an extra bedroom, so that’s one of the values–equity. You shouldn’t get more privileges because you’re making more money.

You’re going to let someone else have this unit because you are overhoused and you’re okay with that. Do some people consider you strange?

Oh I know. The original policy was once you’re in, you have your unit for life. We looked at that and in particular because we were getting subsidy, it’s not a good use of the housing stock to have two people living in three bedroom and one person living in two bedroom. We want to keep the co-op continually vibrant so for people who thought they would be in their unit for life, it’s hard. We thought that too cause that’s the way it was when we first moved in but of course it makes sense to downsize. That would be a sacrifice for us to move from this beautiful unit. What I tell people now, you’re a member of the co-op, but you won’t necessarily keep your unit. So think of the co-op as your home and the unit is where you reside.

So what are you most proud of as a member of this co-op?

I guess I’m proud of the fact that I feel like I can exercise integrity in how I make decisions on the various committees in terms of making sure that I am looking out for the best interests of the co-op based on the principles of the co-op. My guiding principle is the health of the co-op, to help it thrive and survive. The co-op is individual people but is also an entity and feeling like I am part of an entity that has been around for a long time and that I hope will be around for a long time. It feels like I know everybody who lives here and I am friends with everyone who lives here and we look out for each other. And I am proud of the fact that I am part of peoples’ lives and I hope to keep things running smoothly. I actually feel fortunate to be able to live here, it’s a privilege, it’s a blessing. I live in Downtown Vancouver in a house and I’m part of community and I feel like I belong.