The third conversation of the 2015 Shaping Vancouver series focused on Vancouver’s main streets. Our main streets are at the heart of our communities, and have often played a key role in the history and evolution of Vancouver’s neighbourhoods. The defining character of these neighbourhoods are threatened by developmental pressure to demolish and rebuild. Panelists discussed topics such as: what features contribute to the character of main streets, how can character be maintained while allowing main streets to evolve and how can we ensure our main streets are attractive spaces for shops, businesses and customers. The conversation had an overarching theme of analyzing our main streets holistically and approaching heritage conservation from a cultural landscape approach. This methodology allows streets to evolve and change over time while supporting a layered history. This was the last Shaping Vancouver event to take place prior to the society submitting it’s thoughts on the Heritage Action Plan to city officials. 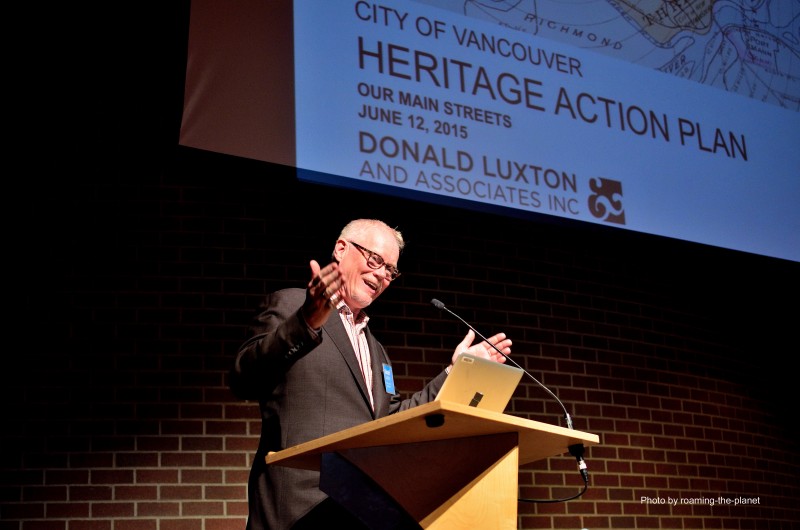 To watch a full-length video of this discussion, please click here.

Luxton helped to frame the evening’s discussion by explaining heritage conservation is seeing a shift in it’s approach. Entire streets and neighbourhoods are being analyzed as areas of character rather than investigating single heritage sites. Luxton further explained that cities are now beginning to view the character of main streets as having “urban value” that contributes to the wellbeing of a city. Moderated by Helen Phillips, the evening explored what are Vancouver’s main streets, what they contribute to the city, and how their defining character can be preserved. 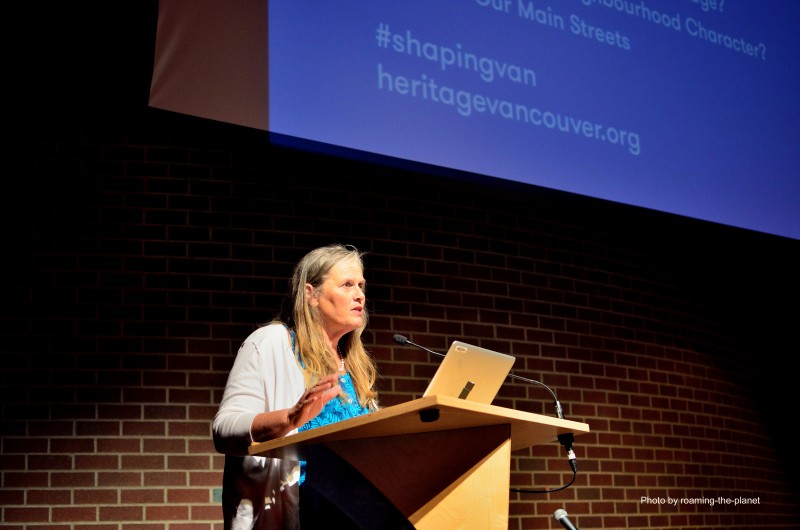 What is a main street? How do we define it?

Maria Stanborough responded that main streets are where a community is able to get its daily needs. Stanborough stated that the community form and identity is formed as a response to these services and that heritage place an integral part of this as it depicts the forming that was created over time. Charles Gauthier offered that a main street is defined as where the most important shops and buildings are. Gauthier also added that cities commonly have more than one of these areas. Marta Farevaag responded to Gauthier’s comment by stating that some of Vancouver’s most popular heritage streets don’t have extensive shopping but have simple shops that served the needs of a community over time. These shops have help to create a desirable character. Farevaag added that these streets should not be viewed as only shopping opportunities but rather spaces that have formed community. 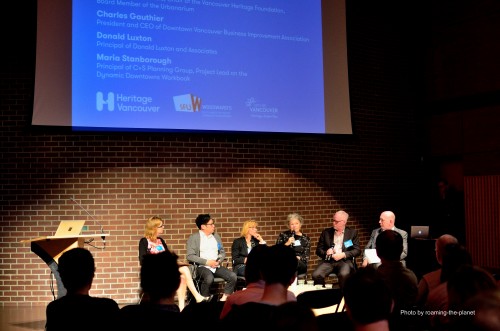 How can main streets contribute to our culture?

Gauthier suggested that our main streets offer a connection to our past and help to frame the future growth of an area. Farevaag agreed with this statement, and added that Vancouver’s main street neighbourhoods also act as a connection to the present, connecting community members and allowing residents to complete shopping needs on foot. Stanborough stated that while identity is important to an area, focus should be on the present needs of a community and balance it with how these historic streets have supported the community. Stanborough also added that we should ask what development projects add to the community, and how they will contribute to the community’s identity. Luxton spoke about the importance of stories, and that heritage areas provide a connection to the stories of a place. Luxton warned about the fragility of the memories in these streets and noted that zoning and regulation currently does not have an effective way to preserve this intangible history. Javier Campos noted that main streets should not be thought of as islands but rather that they are a part of and rely on the streets and communities that surround them. Campos suggested that main street character conservation should take an ecological approach that would analyze how an area’s character is formed.

Panelists shifted the conversation towards the businesses found on main streets – Farevaag noted that rapid development or gentrification can often force out the shops that provide basic needs and amenities. Farevaag added that the issue of businesses being displaced extends beyond just building preservation. Campos stressed the importance of vision within communities, which can be used to help shape the future of the street. All panelists agreed that communities need to engaged and a part of forming a vision for their main streets. Gauthier suggested that this effort would be a great project for an area’s B.I.A, who could work with residents and business owners to attract businesses that hold similar heritage values.

When discussing walkability, a trait that defines many of Vancouver’s main streets, panelists spoke about the importance of regulating massing in neighbourhoods, while attempting to increase density to meet increased needs. Campos explained that in order to maintain a creative class within Vancouver, areas around main streets will likely need to densify. Farevaag agreed but added that density should be concentrated around arterial roads.  Gauthier argued that these arterial areas need to increase “sticky factors”, which provide pedestrians or transit users with reasons to linger in an area (such as bistro patios, or street festivals). Campos suggested that if pedestrian orientation would gain more support is it was framed as a benefit to community health and wellbeing rather than just a trait of heritage areas. 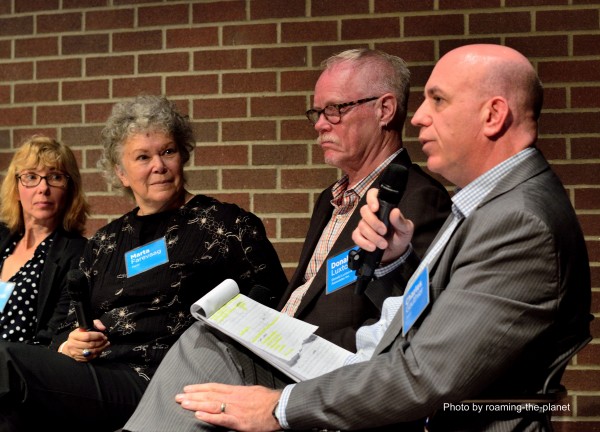 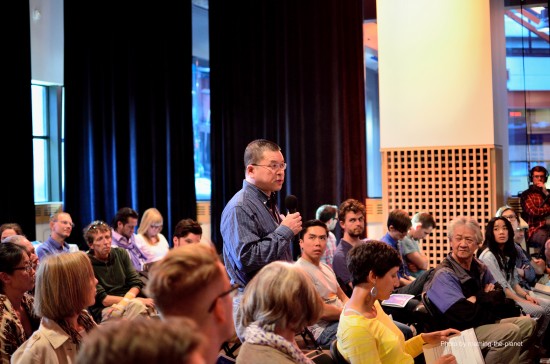 How are communities outside of Vancouver using heritage as a revitalization tool?

Stanborough spoke about her work in the Okanagan Valley that focused on the revitalization of downtown streets in small towns. She noted that the uniqueness of main streets requires communities to create a tailored plan to their area but suggested that communities should research other projects to gain inspiration and draw parallels to their own situation. Stanborough also discussed the importance of working with property owners, in her experience hiring a economist to help explain the financial benefits of restoring a heritage building to property and business owners was extremely beneficial. Panelists discussed Nanaimo’s tax incentive programs that provided tax relief for builder that incorporate residential units within main street commercial buildings, noting that this program reinforces the need for residents within main streets. Victoria’s design grant program which provides funding to heritage property owners was also discussed as a possible Vancouver initiative that would prioritize heritage conservation.